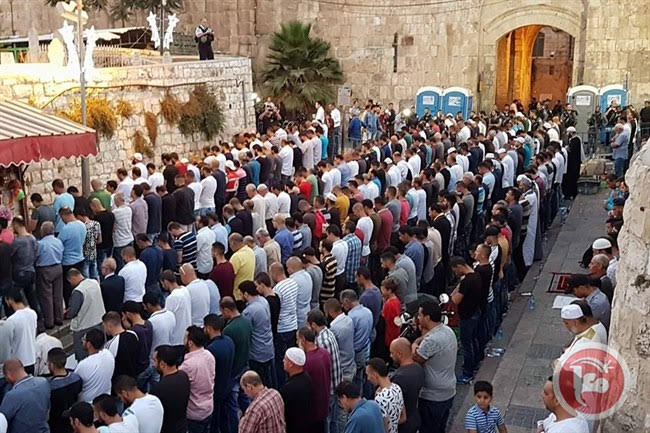 A web of formal and informal Israeli-Arab relations and common fears of renewed popular uprisings that could threaten regimes and benefit Islamist groups like the Muslim Brotherhood facilitated Israel’s backing down in the crisis over Jerusalem’s Temple Mount or Haram al Sharif, home to Islam’s third most holy shrine, the Al Aqsa mosque.

Protests in recent weeks that forced Israel to lift restrictions on access and dismantle security arrangements installed on a site that evokes deep-seated emotions among Muslims and Jews alike had all the makings of a popular revolt and could yet prove to be a catalyst in approaches to Palestinian resistance to Israeli occupation of lands captured half a century ago during the 1967 Middle East war. The security equipment was initially installed after two Palestinians with Israeli nationality shot dead two Israeli policemen in the compound.

The spontaneous protests that erupted independent of established political forces such as the Palestinian Authority (PA) headed by President Mahmoud Abbas; Hamas, the Islamist faction that controls the Gaza Strip, and other Palestinian political factions, empowered Palestinian Jerusalemites who live in a part of the city that has been annexed by Israel but feel that they are routinely discriminated against. The dismantling of the security equipment and lifting of restrictions on access constituted a rare instance in which Israel bowed to Palestinian pressure.

“We are on the threshold of a big shift. What is going on today is not random or transient. It could be the beginning of a third intifada that is different from the others. What is unique about this is that it’s not individual actions, but a popular movement capable of attracting huge numbers of people. This popular momentum could recharge the Palestinian people. It may take time but we are on the way. It will override the PA. They don’t even know it exists. This will bring about a change in leadership,” added former Palestinian information minister-turned activist Mustafa Barghouti.

The sense of empowerment was evident two days after the Israeli backdown when protests erupted in the Jaffa section of Tel Aviv after police shot dead a Palestinian during a shootout with suspected criminals. ‘The policemen have no right to shoot at people. This time we will not keep quiet,’ said a Jaffa resident.

The notion of an empowered and angry public raised not only the spectre of a possible Palestinian uprising, the third in three decades, but a potential return of street protests elsewhere in the Middle East like those that in 2011 toppled the leaders of Egypt, Tunisia, Libya and Yemen.

The Jerusalem protests erupted at a moment that Saudi Arabia and the UAE have gone to extremes to roll back the 2011 achievements and ensure that the Middle East and North Africa does not witness a repeat. Saudi King Salman, the custodian of Islam’s two most holy cities, Mecca and Medina, in a statement by his royal court, claimed credit for resolving the Al Aqsa crisis through his contacts with world leaders.

The Jerusalem protests came on the back of widespread anti-government demonstrations in northern Morocco that have mushroomed since May and more recently expressed an anti-monarchy sentiment. The Moroccan protests, much like the 2011 revolt in Tunisia that forced President out of office, were sparked by the death of a fish vendor in the Riffian city of al Hoceima, who was killed by a trash compactor as he attempted to recover fish confiscated by authorities.

King Mohammed VI of Morocco, in a bid to end the unrest, this weekend pardoned more than a thousand people who were under arrest for taking part in the protests.

Two incidents, the sentencing of a scion of a key Jordanian tribe to life in prison for killing three Americans at a Jordanian air base and the extradition to Israel of an Israeli security officer who killed two Jordanians to fend off an attack, threaten to take Jordan to the brink. Outrage over the government’s handling of the incidents have called into question a social contract in which Jordanians in the wake of protests in 2011 dropped demands for political reform and accepted austerity in exchange for stability.

“This has become an issue of dignity. There is a complete lack of trust and resentment toward this government by the people. We are afraid of where we go from this point,” said Jordanian member of parliament Saddah Habashneh.

Much more than the Moroccan protests and Jordanian anger, resistance to Israeli actions surrounding the Al Aqsa Mosque had the potential of forcing the hand of Arab autocrats in a post-2011 era in which Arabic public opinion has begun to count. Deep-seated divisions in the Arab world coupled with draconian anti-protest laws may explain the absence of demonstrations in the Middle East and North Africa in support of the Palestinians.

Nonetheless, if Palestinians were to capitalize on their Al Aqsa success to confront Israeli occupation and discrimination, it could spark public dissent elsewhere in the region as well as the wider Muslim world that could turn against local leaders. Continued Palestinian protests, moreover, could complicate cooperation between Israel and conservative Arab states in countering Iranian influence in the Middle East as well as an attempt to return to Palestine a UAE-backed Palestinian leader, who has good relations with key figures in the United States and Israel.

Arab rulers have so far been helped not only by the absence of solidarity protests in Arab capitals, but also by indications that Arab public opinion may be divided because of the Gulf crisis over attitudes towards the Muslim Brotherhood and Hamas, both of which have close ties to Qatar. In one instance, a caller told the London-based Arabic-language Al-Hiwar television network: “I’m opposed to an Al-Aqsa victory, because an Al-Aqsa victory is a victory for Hamas and Qatar!”

Ahmed Samah al-Idarusi, a spokesman for the Popular Committee for the Defense of Sinai, a group formed by the Egyptian region’s tribal leaders, complained that “we now encounter Egyptian diplomatic and cultural silence such that even the elites are not capable of releasing a single joint statement of condemnation” of Israeli actions in the Al Aqsa compound.

Prominent Israeli commentator Zvi Bar’el noted that so far, the Al Aqsa protests have not sparked a third Palestinian intifada even though they had all the makings of an uprising. Mr. Bar’el argued that Palestinians were still traumatized by the political and human cost of the second intifada in the first years of the 21st century that ironically was dubbed the Al Aqsa intifada.

“The tragic results of the second intifada – from both the humanitarian and strategic perspectives – have been deeply engraved in the collective Palestinian memory. It’s hard to imagine what the expiry date of such trauma is… Perhaps…the trauma is still effective – but it’s best not to put it to the test,” Mr. Bar’el said.