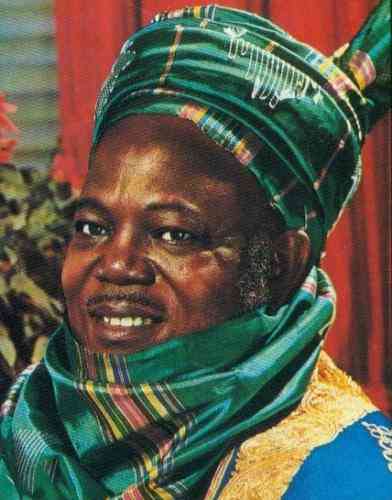 It is a video you have probably seen. These days of violent tribal evangelism you probably would have watched the 1.28 seconds clip and not the full 2 minute clip. Therefore I insist you first watch this 2 minute clip to get the whole conversation then proceed to understand why I present that Ahmadu Bello the Sardauna was perhaps not the man you have been poisoned to think he was by mischievous media warriors and exuberant malicious youth history revisionists. Watch clip here: https://www.youtube.com/watch?v=8y1Zpk4DrlA

And here is the text:

White man: One thing I have noticed while I have been here is that northerners seem to have a n obsession about the Igbos. Could you explain that to  me?

Sardauna: Well, the Igbos are more or less the type of people, whose desire is mainly to dominate everybody. If they go to a village; to a town, they want to monopolise everything in that area. If you put them in a labour camp as a labourer, within a year, they’ll try to emerge as head man of that camp, and so on. Well in the past, our people were not alive to their responsibilities; because, as you can see from our northernisation policy, that in 1952 when I came here, there weren’t 10 northerners in our civil service here…and I tried to have it northernised and now all important posts are being held by northerners.

White man: Is this policy of filling all key posts in the north solely with northerners and not with other Nigerians a temporary or permanent one?

Sardauna: In actual fact, what it is, is a northerner first. If you can’t get a northerner, then we take an expatriate like yourself on contract. If we can’t then we can employ another Nigerian but on contract, too. This is going to be permanent, I should say, for as far as I can foresee; because it would be rather dangerous to see the number of boys we are now turning from all our learning institutions coming out (and) having no work to do. I’m sure that whichever government of the day might be rather embarrassed and it might even lead to bloodshed.

White man: Doesn’t this damage the idea, Sir of all people in all regions in Nigeria being co-citizens of one country?

Sardauna: Well it might but you are new to our region – how many northerners are employed in the East or in the West? The answer is (none), and if there are any, there may be 10 labourers employed only, in the two regions.

There Was No One Nigeria At The Time

First we must understand the time frame and context of Sardauna’s conversation with the White man.

At the time Nigeria was not a central governed country, it had the regionalism many today fight for. In 1939, Bernard Bourdillon the Governor-general created the three provinces and established federalism in Nigeria.

It was at such a time, when there were three literally independent regions that Sardauna was interviewed. Ahmadu Bello, Sardauna was the first premier of the Northern Nigeria region, he ruled from 1954 till 1966 when Nzeogwu murdered him.

So when people attempt to portray Sardauna as a tribalist, they are being mischievous and malicious. Under true regionalism, your duty as premier of your region is to bring out the best output for the indigenous people of your region. You have no obligation to serve to the needs of the people of other regions over your own. As can be noticed in the last response by Sardauna, which is purposefully cut out of most agitator and fake evangelists’ clips on the net, when pried further, late Sardauna actually said that at the time the north was actually more accepting of other regions than the other, Western and Eastern regions. He said tops, you will find 10 northerners working in the civil service of the Eastern and Western regions and these northerners will be no more than mere lowest class laborers. This deposition has not been contested or denied by any of the revisionists.

The Men That Ended Regionalism And Made A One Nigeria

Chukwuma Kaduna Nzeogwu, being a Southerner who grew up in the north and was perhaps more Hausa than Igbo did not respect the tenets of regionalism and perhaps had other desires and agenda for Nigeria. He struck with the first coup and killed Sardauna. Aguiyi Ironsi from the South East who was perhaps not a very bright man, took over and without proper thought, scrapped regionalism and this is how we got here today. It was two South Eastern men in succession that did away with the regionalism and true federalism system and replaced it with a One Nigeria. Only in the context of a One Nigeria without regionalism as obtains today can Sardauna’s comments be taken as tribalistic. Think about it, while Sardauna was talking about mere employment, Ojukwu was asking for an entire separate nation. This was the terrain that obtained at the time. Up to me, I reject their regionalism methods that cut out, I am for no borders and equal opportunities not just for other regions but other African nations, “everybody come inside,” however we must understand the roles and particular challenges of these men in those peculiar times of a new regional Nigeria.

It is important to note that Sardauna in this clip never denigrated Igbos, rather he described their excellence in rising up the ladder and conquering all challenges to dominate in competitive fields of human endeavor.

This is of course a very beautiful and expansive tale and we invite all young Nigerians to read their history more and be better informed so they are not used as couriers of power drunk tribalist megalomaniacs who are anti African unity and progress.

A Side Note: The Wise’ol Buhari Will Satisfy All Nigerians

I must mention that I can put my anythings on the table to bet and assure Nigerians that Nigeria of today has one of its best leaders and perhaps the least corrupt leader in not just Africa, but the entire world. Be assured that Federal character will be respected and there shall be enough appointment opportunities for decent and unfortunately also for parasitic, federal employment dependent politicians from most regions (it’s 500 ethnic groups and rather impossible to satisfy all).

There are just so many lies you have probably been told. But the truth eventually comes out sooner or later. It always does. And only the truth gives and guarantees true freedom.