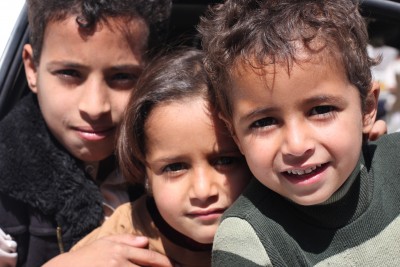 We can see that “Arab racism” and ethnocentric “Arab nationalism,” which has emerged from time to time throughout history – and invariably ended badly – has apparently reawaken from its slumber yet again.

Arab racism has its origins in the Umayyad period. The Umayyads, who proclaimed the Arabs to be a “master race” defined the Turkish, Ajam, Berber, Hindu, etc. tribes as “mawali”, that is, “slave, inferior races.” Their Arab ethnocentric -based policies, which despised and excluded non-Arab non-Muslim – and even non-Arab Muslim tribes – was one of the biggest reasons behind the Umayyad Empire’s ultimate downfall.

As for recent history: The radical racialist or ethnocentric-based nationalist ideas which developed in Europe in the late 19th century rallied supporters among Arabs and rebellions against the Ottoman Empire began in this way. This radical ethnocentric nationalism, which developed with the influence of Western powers desiring to rule the Middle East, ended in the separation of many Arab provinces from the Ottoman Empire.

Likewise, the members of the Arab League that united and waged a war against Israel in 1948 were defeated in what can only be described as a debacle. In doing so, they caused Israel’s domain in the region to increase from 56% to 78% and 700,000 Palestinians left their homeland and sought refuge in neighboring countries as refugees.

Not long thereafter, Gamal Abdel Nasser, who took power in Egypt by overthrowing the King in a military coup, laid the foundations for a new wave of Arab nationalism by espousing enmity against Israel and the Western world and rallied these feelings to the question of Palestine. Nasser’s Pan-Arab socialism, based on the philosophy of Arab superiority, rallied millions of supporters in the Arab countries. Nasser, who essentially turned the question of Palestine into a racial problem, united Arabs against Israel. However, their utter defeat in the 1967 Six-Day War between Israel and Egypt – along with Syria and Jordan – was yet another debacle and gave the Pan-Arabist ideology a sound thrashing.

But models of Arab nationalism similar to Nasser’s were maintained in the Ba’ath regimes in Iraq and Syria and to a lesser extent in Libya. Saddam Hussein, one of the last representatives of the Arabist ethnocentric idea and ambitious to become the leader of the Arab world, tortured and massacred non-Arab minorities in Iraq and went down in infamy as a result. Saddam also slaughtered the Kurds who, like himself, were Sunni Muslims, because they were not Arabs. In sad truth, there was no significant objection in the Arab world against these inhuman practices of his regime. As for today, the situation of Syria and Iraq, which the racist mindset of Ba’athism caused, is obvious.

What is interesting is that even though “Arab racism” has failed repeatedly and has been defeated time and again throughout history, it still continues to find a place in the Arab world.

It is obvious, with many tangible examples, that Arab racism and radical Arab nationalism are still influential ideologies in the majority of the Arab world:

– The Arab world pretending to express sympathy for the rights of Palestinians in Israel never utters a word against the injustices faced by Palestinian refugees who have long been living in the refugee camps of Lebanon in squalor and misery, because the injustices and cruelties perpetrated by Arabs simply do not pose a problem for them.

– While there is so much grief in the majority of the Islamic world, they regard founding an Arab League – centered exclusively on Arabs – as significant instead of establishing an Islamic Union: Furthermore, they even do not discuss what non-Arab Muslims (such as the peoples of East Turkestan and the Rohingya Muslims of Myanmar) experience and even view them as an enemy to some degree.

– The disagreements and conflicts in the Middle East and North Africa are legion; this is almost entirely due to racist or ethnocentric reasons, and sectarianism is merely a supporting player, if you will. The conflicts between Arabs and Iran are not because the Iranians are Shia, but because they are Persians. For instance, even though 80% of Bahrain is Shia, they detest Iran because Iranians are not Arabs and Bahrain is a member of the Arab League. The Iran-Iraq War was an Arab-Persian war far more than a Sunni-Shia war.

– Similarly, the Sunni and the Shia live together in Egypt. Al Azhar, regarded as an authority by the Arabs, was founded by the Shia. There are some holy places belonging to the Shia in many areas of Egypt. In short, Sunni Arabs do not usually have any problem with Shia Arabs but when it comes to Iran, Egypt can easily exclude them by calling them “Persians” and using starkly racist language. It displays the same racist and separatist attitude towards Turks even though most Turks are Sunni Muslims.

– On the other hand, although Wahhabism is regarded as a deviant sect according to most Sunni beliefs, Sunni Arabs can easily unite around Wahhabi Saudis due to a misplaced notion of racial or ethnocentric solidarity.

– Some people in the Gulf States view themselves as superior to North African countries because they are not full-blooded Arabs even though they are in the Arab League. For this reason, these countries sometimes act like a more privileged and special union apart from the rest of the Arab League. They make economic decisions together and they want to unite in some areas such as a shared currency or common military forces.

– The Gulf States allow American and Israeli military bases, which will be used to spill Muslim blood, to be established on their own lands. The fuel needs of the Israel Army are mostly met by the Gulf States. Yet Iran is hated because of racist reasons, even though it is a Muslim country. In the event of an Israel-Iran war, it cannot be even imagined that any Arab state will support Iran, yet it is infinitely more likely that they would gleefully support Israel, whom they profoundly detest as a result of an erroneous point of view, which in fact is incompatible with the teachings of the Qur’an.

It is possible to find innumerable examples of such behaviour.

As we can easily see, this racist mindset, a mindset which has done far more harm than good throughout history, is still to be found in great plentitude in the Arab world. In fact, it is a profound intellectual contradiction in itself that these countries, in which almost all of the people are Muslim, defend and apply such a perverse concept, which is in fundamental conflict with the Qur’an and the hadiths of our Prophet (pbuh). In any event, it is not technically possible to talk about a “pure race” in a region like Middle East (or arguably, anywhere else on the planet), where many diverse ethnic groups live and are inextricably interwoven. If there was an opportunity to do an extensive genetic research, it will be seen that there is no such thing as a “pure Arab,” a “pure Turk,” a “pure Persian” or a “pure Kurd.”

It is doubtlessly an unconscionable and mindless attitude to consider someone valuable or valueless according to his genetic composition and develop a notion of “race-based” solidarity. What the region needs is a spirit of friendship and brotherhood which is based upon the values of the Qur’an; a spirit that values everyone and every culture. Racial, ethnic, or tribally-based unions are inevitably doomed to failure.