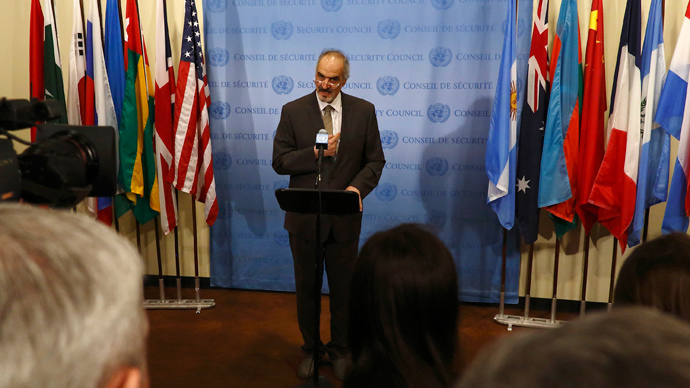 The Syrian government is demanding that the United Nations immediately investigate three alleged chemical attacks carried out by rebel groups on the outskirts of Damascus last week, Syria’s envoy to the UN said.

Ambassador Bashar Jaafari said he had requested of UN Secretary-General Ban Ki-moon that the team of experts currently in Damascus investigating an alleged use of chemical weapons last week also investigate these other attacks.

The attacks took place on August 22, 24 and 25 in Jobar, Sahnaya, and al-Bahariya, Jaafari told journalists Wednesday. The “militants” used toxic chemical gas against the Syrian army, the diplomat said.

“We are asking UN to incorporate 3 more locations where the Syrian soldiers inhaled the nerve gas also in the suburbs of Damascus. So the spectrum of investigation is increasing compared to the initial phase of investigation,” Jaafari said.

Jaafari spoke shortly after an informal meeting of the UN Security Council, where its five permanent members discussed the UK’s proposed draft resolution. The text blames Assad’s government for an alleged chemical attack on August 21, and demands a swift response.

“There is no consensus in the Council on any draft of the resolution, whether it is British or French or American… because members of the Council do not believe the authenticity of the accusations provided by this delegation or that delegation,” the Syrian diplomat said.

Jaafari also accused the US, UK and France of being “part of the problem,” rather than “a solution to the crisis.” These Western states are providing “armed terrorists groups” in Syria with weapons and all kinds of logistical support, he stated.

Following the alleged chemical weapons attack on March 19 in Khan al-Assal near Aleppo, which killed over 30 people, the Syrian government asked the UN chief for assistance in investigating the attack and identifying who was behind it, Jaafari said.

But Ban Ki-moon, “his experts in the department of disarmament, as well as the three Western delegations in the Council, objected to the second part of our request,” he said. “They objected to our request to identify who did it from day one, because they knew who did it in Khan al-Assal.”

The diplomat said that, even though “everyone agreed” that the March 19 attack involved chemical weapons, the UK, the US and France did not submit any draft resolutions to the UN Security Council then.

“They did not raise a finger in the media to say that what happened in Khan al-Assal was wrong,” Jaafari said.

After the incident near Aleppo, the UN set up a fact-finding mission. The investigation, however, got stalled as a group of Western countries insisted on a more thorough inquiry, which would also look into alleged chemical weapons use in Homs in December 2012. The rebel groups insisted that Assad’s forces were responsible for that attack. The investigators also required access to Syrian military installations, which the UN said Damascus denied them access to. In addition, the UN excluded Russian and Chinese experts from the investigation team, and Syria protested this decision.

Moscow repeatedly called on its partners not to delay the investigation and not to draw any conclusions before the findings were complete. However, some Western states – mainly the US and the UK – claimed that “limited but persuasive information” allegedly proved “with varying degrees of confidence” the Assad’s forces were behind the use of chemical weapons.

“The Syrian government is against the use of chemical weapons by all means,” Jaafari said on Wednesday, adding that the government wants those behind such attacks in the country to be held accountable.

“We want the investigation team currently present on Syrian soil to continue investigating this crime and to come up with a scientific report to be examined by the Security Council members,” he told journalists.

The UN team is currently working at the site of the alleged August 21 attack in a suburb of Damascus. According to Ban Ki-moon, they are expected to finish their investigation in four days, then the results will be sent to the Security Council.  The experts have collected samples and interviewed victims and witnesses, the Secretary General told reporters in The Hague on Wednesday.

“The team needs time to do its job,” he pointed out.

However, the US, the UK and France continue pushing for a response to the Syrian chemical attack. American State Department spokeswoman Marie Harf said on Wednesday that the US will not let Syria “hide behind” the Russian veto in the UN Security Council against military intervention. – RT