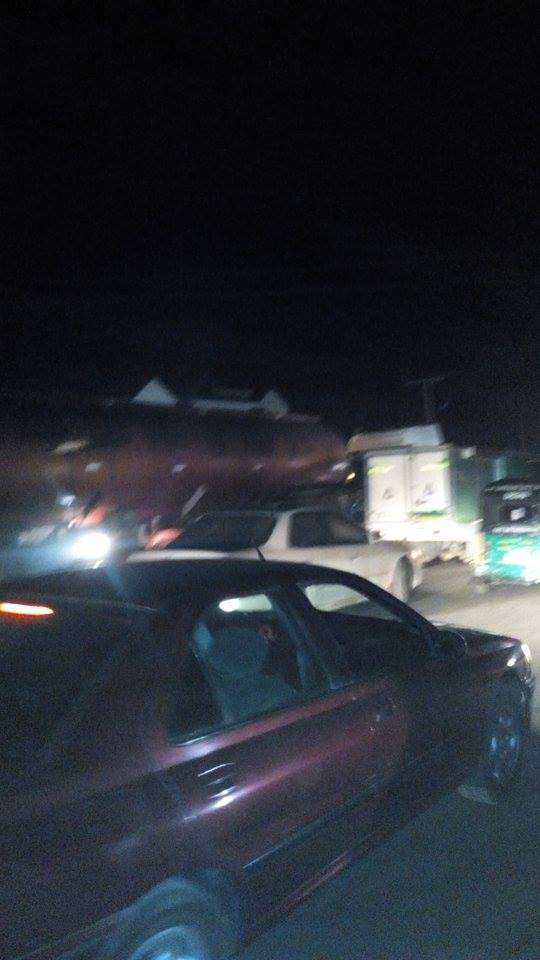 Tanker drivers are said to have blocked the road at Nnamdi Azikiway Express by-pass, Kaura motors U Turn, Askulaye Kaduna. No movement is reported as there appears to be a clash between soldiers and tanker drivers.

This as fuel scarcity hits due apparently to marketers not being able to afford to import product and local refinery out put not adequately supplementing needed quantities.

Nigeria’s current fuel scarcity is likely to persist and even worsen unless the Muhammadu Buhari administration takes radical steps to address certain root problems, among them corruption, banking snags, and a crisis management in the Nigerian National Petroleum Corporation (NNPC), according to information gathered through investigations by SaharaReporters.

During our weeklong investigation, several players in the oil sector, including government officials, bankers, and petroleum analysts disclosed that the NNPC and the Pipelines Product Marketing Company (PPMC) cannot store fuel products in three major depots at Mosimi, Ejigbo, and Ibadan because a major pipeline supplying the depot has been completely destroyed by vandals and brigands in Arepo, a town in Ogun State.

In addition, the PPMC’s ability to import refined crude has been significantly impaired because the swap and offshore processing agreements (OPA) introduced by the Buhari administration have not led to transparency. A top source at the NNPC told SaharaReporters that the cabal in the Nigeria oil industry that was responsible for the mismanagement and failure of earlier swap arrangements had sneaked their way back into the scheme of things. For example, an arrangement made with Duke Oil to refine fuel abroad eventually ended up with Oando Energy and Sahara Energy said the source. He disclosed that Oando Energy has limited capacity to even carry out its day-to-day commitments because the company lost a huge sum of money in the last financial year.

The PPMC accounts for Petrol Motor Spirit imports into Nigeria with daily consumption pegged at 40 million liters per day. All of Nigeria’s refineries have shut down, unable to produce a single liter of petroleum products for local consumption. Since the swaps and OPAs have failed and refineries are not working, the PPMC is not able to supply up to 25 percent of the amount required of it as a player on the supply chain.

Oil marketers who are responsible for importing 45% of the country’s requirement are hampered by a lack of funds and a bizarre economic policy that has made it impossible for them to quickly raise capital, bankers and oil sector analysts told SaharaReporters. For instance, most marketers are unable to get foreign exchange directly from their banks as used to be the case. Instead, they are often compelled to buy dollars from Bureaux de Change, which means that they have no access to forex from the banks at official rates.

Besides, a top fuel importer told SaharaReporters that most oil marketers have not received fuel subsidy payments since March 2015 when the Goodluck Jonathan government paid for monies owed them for the third quarter of 2014. An oil sector analyst stated that the fuel subsidy process and payments were mired in corruption but added that suppliers with legitimate subsidy claims had been affected by non-payment.

Last week, the Buhari administration announced the payment of N415 billion in subsidy payments to oil marketers, but quickly withdrew the offer on realizing that they needed approval by the National Assembly before payments are made. An aide to Mr. Buhari told our correspondent that the executive was worried that seeking the approval of the National Assembly would entail demands from Senator Bukola Saraki that the government makes compromises on the senator’s ongoing trial at the Code of Conduct Tribunal. The source also said there was the likelihood that some rogue legislators would seize the opportunity to demand bribes from oil marketers.

A banking sector watcher stated that several Nigerian banks are on the cusp of distress. “There is a huge strain on liquidity in many commercial banks as we speak,” said the source. He added, “In fact, some letters of credits offered by these banks to oil marketers have dwindled in value as the letters are not backed by cash.” According to him, at least nine commercial banks in Nigeria are undergoing some degree of distress and urgently looking for capitalization. “If the trend doesn’t improve, then some letters of credit from Nigerian banks may lead to longer than the usual 30 days to get fuel imports,” the source added.

To worsen matters, the Central Bank of Nigeria (CBN) has discontinued its frequent sale of dollars. Instead, the CBN now sells dollars only on Thursdays. “This is the only source of forex to fund importation of fuel. And, week in and week out, the amount being offered gets smaller and smaller per transaction,” said the source.

According to marketers and NNPC officials, it takes three weeks to get refined petroleum into Nigeria after letters of credit have been done. “Now that letters [of credit] are not going out of the banks, there is the possibility that the scarcity will hit harder in December,” one NNPC source declared.

Our different sources agreed that, with refineries shut down, a brewing banking crisis and forex scarcity, Nigeria is bound to groan under fuel scarcity for several months more. “The only real solution would be the government acting boldly and aggressively to eliminate known corrupt players in the fuel import regime and acting strategically to ensure that the government and banks are able to support legitimate players in the oil sector,” an energy analyst stated.