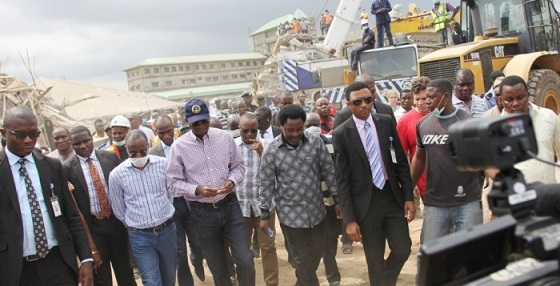 It has emerged that the Pastor of the Synagogue Church of All nation (SCOAN), Pastor T.B. Joshua offered reporters who have gone to cover the collapse of the guest house in his church the sum of N50,000 to conceal details of the collapse.

A reporter with Premium Times, Nicholas Ibekwe revealed this via his twitter handle on Saturday.

According to Mr. Ibekwe, T.B Joshua offered reporters at the scene of the building collapse 50,000 each, but said he rejected the bribe offer.

“Last Sunday, I was the only journalist who turned down TB Joshua’s N50,000 bribe offered to each reporters,” Nicholas said.

This revelation is coming same day President Goodluck Jonathan paid the Synagogue pastor a visit, promising to investigate the cause of the building collapse. The visit has drawn criticism from various quarters many of whom are of the opinion that Pastor Joshua should be undergoing prosecution for the death of over 80 people in his church having failed to meet building regulations in the collapse of the six story building.

Mr. Ibekwe berated the president and Lagos state governor, Babatunde Fashola for threading softly with a man whose Church left scores of people dead, wondering how he wielded so much power to be accorded such respect.

He said Fashola instead of denouncing T.B. Josha publicly, went into a private meeting with the pastor and bolted through the back door at the end of the meeting, leaving journalists who had waited to hear from him disappointed.

“I was at the #Synagogue on Sunday when Fashola visited, instead of denouncing him publicly Fashola held a closed door meeting with TB Joshua”

“Where in any civilized country would a governor avoid reporters on his first visit to the site of a major disaster? Where?”

Mr. Ibekwe who also took a swipe at journalists for collecting the bribe from the pastor saying he has been insulted for being brave to say the truth.

“I’ve never been insulted like this all my life. For being brave to say the truth people have called me all kinds of names. Jeezzz #Synagogue,” Nicholas said.

When asked to provide evidence of his claim, Mr. Ibekwe tweeted an audio of the conversation where journalists were offered the money.

listen to ‘Audio Proof’ on Audioboo

—
His claim confirms earlier report that church members prevented access to the site of the collapsed building, barring emergency workers from carrying out rescue efforts, while journalists were also manhandled.

The synagogue pastor has been dishing out several propaganda news item claiming that a strange aircraft is responsible for the collapse of the building and even claimed the building collapse may have been an act of the Boko Haram terrorists group.