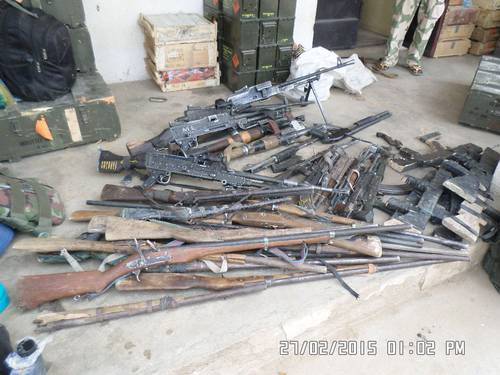 Amidst deterioting security situation in their respective states, the Executive Governors of Rivers State, His Excellency, Chief Nyesom Wike and his Zamfara State counterpart, His Excellency, Alhaji Abdualaziz Yari Abubakar, who is also the Chairman of Nigerian Governors’ Forum have variously visited the Chief of Army Staff, Lieutenant General Tukur Yusufu Buratai in his office at the Army Headquarters to discuss security issues in their respective States this week.

In his remarks, the Rivers State Governor stated that he was at the Army Headquarters to discuss security issues in the state that bordered on growing cult related clashes and killings by some individuals in the State which has security implications, while preparations for the election was in progress. He expressed concern over the atmosphere of security in the state.

The Chief of Army Staff equally expressed concern on the security situation in the state especially on the utterances of some prominent individuals in the state that have serious security implications.

The visit of the Rivers State Governor has underscored the need to draw the attention of all political interest groups in Rivers State that the Nigerian Army will remain neutral and apolitical but will not spare anyone in the discharge of its security duty and the maintenance of peace. The Army had long been called out to assist the Nigeria Police in internal security duties. We shall continue to perform this constitutional duty professionally without bias in conjunction with other security agencies.

In a similar visit Zamfara State Governor, Alhaji Abdulaziz Yari Abubakar of Zamfara State on the other hand, drew the attention of the Chief of Army Staff to the menace of cattle rustlers and armed banditry that is bedevilling some parts of the state and called on the Nigerian Army to assist. He assured that the state would support the Army in clearing the rustlers and other criminals in the state.

In his response, the Chief of Army Staff assured the Governor that the Nigerian Army has been working in conjunction with other security agencies to rout out cattle rustlers and other criminals not only in the Zamfara State, but the entire North West geo-political zone where it was more prevalent.