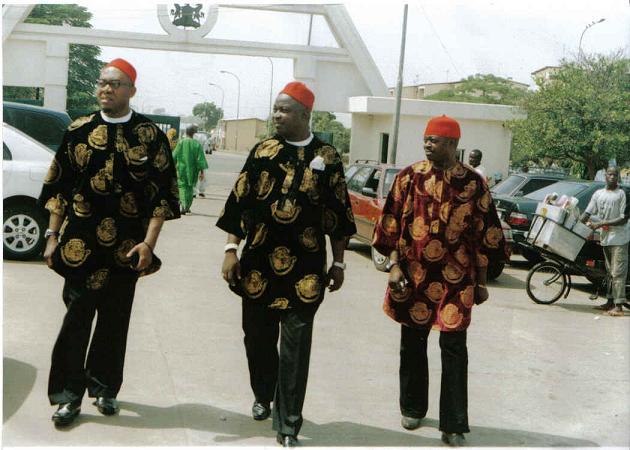 I know I am treading on a dangerous path that may precipitate my crucifixion by my own kinsmen. As the saying goes, conscience is an open wound and only truth can heal it. I am Igbo, but I will not shield my people of any malfeasance. The Igbo race just needs to come to grips with the painful reality of issues concerning it. The locus of this piece is not to join the racial debate which seems to have reached a parabolic diminuendo between the Igbo and the Yoruba, but to throw up some issues of which gravitas cannot be wished away.

It is an indubitable fact, that an unenviable percentage of crimes committed in Nigeria are committed by people of the Igbo mould. I know, this is disappointing coming from an Igbo person. But it is the truth. Our crime records show that some unscrupulous Igbo constitute the majority in the denizens of criminals in Nigeria. It is saddening, but this is a reality we the Igbo have to accept and deal with. Consequently, the Igbo I hate are those Igbo people who know the truth regarding Igbo criminality in Nigeria, but suppress it in the name of Igbo nationalism. Instead of adding their voices to the war against crime, and devising intelligent schemas to curb the menace of armed robbery and kidnapping in the South East and Nigeria in general, they go on a campaign of diatribes and vicious aspersions smearing the purveyor of truth and his message. It is just unfortunate that we the Igbo have chosen to ignore the dastardly acts and crimes committed by our Igbo brothers and sisters in Nigeria.

Concomitantly, it is an incontrovertible fact that ninety per cent of the purveyors of fake drugs in Nigeria are Igbo. This is a truth that we the Igbo try to brush aside as false or as another cryptic criminal profiling of the Igbo by other nationalities in Nigeria. It is sickening that the Igbo despise any of their own who goes all out to stop the criminality of their money “mongering” ilk. The same fate applies to any Igbo person who dares to take a different and unpopular stand in a matter at the provenance of Igbo existence. Professor Dora Akunyili comes to mind. When she embarked on that glorious war to rid Nigeria of fake drugs she knew the culprits were her own people. This informed her descending on the purveyors of death at Bridge Head Onitsha which was a constellation portal for big time fake drug merchants. What did she get for it? She lost the senatorial election! Not that her crackdown on Igbo death merchants was the sole reason she lost the election, but it was a seminal factor in determining her electoral fate. Suffice it to say that when she was battling with fake drug merchants, some Igbo people opined that she was nursing a vendetta while some posited she was pursuing a Yoruba agenda to cripple Igbo businesses.  Again, some Igbo people quipped that after doing all her “gra-gra” she would come home and meet them. That they would be waiting for her. As stated earlier, this partly underscores the deal she got at the senatorial election. And also the assassination attempt on her. She did not get the accolades of her own people! In that vein, the Igbo I hate are those Igbo people, who for the sake of filthy lucre turn a blind eye to criminal Igbo businesses; who believe that any business is kosher as long as you can get enough money from it to build an “Akpu-la-Akpu” (an imposing edifice that shows your status as wealthy) in your village.

There is no doubt that inordinate hankering for wealth by the Igbo is at the heart of Igbo criminality. The baby factories are all an invention of some bad elements in the Igbo fold. Also many Nigerians languishing in jails abroad, most especially in Malaysia, China, Thailand and a host of other foreign countries are majorly of the Igbo extraction. The documentary “Nigerians Jailed in China” by Channels TV adds verisimilitude to this claim. This is grievous and opprobrious enough for the Igbo to ratiocinate and cogitate on how to stem the drift of Igbo youths into crime instead of cutting down anyone who speaks unkindly of the Igbo in this vista. The mad craving for making money at all cost which seems now to be endorsed by the Igbo culture should be pooh-poohed. More credence and goodwill should be given to those who work hard for their money, and to those who do not have much, but have sterling academic credentials and knowledge on which the race can build and grow.

Finally, the Igbo I hate are those Igbo people who cry for Biafra at the drop of a hat when there is a matter of national consequence. They are the huge miscellany of Igbo people whose investments are in other parts of Nigeria. Ninety per cent of them (the investments)! And who when you ask them to move their businesses to their homeland, they tell you that it (the South East) is not viable or good for business. Yet at every given time they cry for Biafra. What hypocrisy!

We the Igbo need to come down to earth with our problems of which criminality is the most daunting. As said earlier, we must transmogrify the culture of money “mongering” and condemn criminality in all forms for we seem to be topping the list of criminals in Nigeria. After all said and done, I remain a bonafide Igbo man for truth.