Former governor of Lagos, Raji Fashola did not lie when he said that wrestling with a pig gets you dirty. He knew that he had gotten dirty, but who is the pig? Me? BudgIT? No, we are not the ones Fashola embraced and rolled with to get dirty. It was the Cabal pigs that dirtied him.

While the ex-governor attempted to defend the spending of N78 million ($400,000) on upgrading, building a countdown clock and making his website mobile compliant, the question is, was this allocation of the resources of Lagos State responsible? Indeed software development, being relatively nonconcrete can be billed as it pleases various “experts.” You can estimate $1 million or even $1 billion for the same project and the Lagos procurement office can approve, but again, does this make it fiscally responsible for the poor Nigeria and poor Lagos to choose such project to invest in?

I was driven in a hurry from Surulere to Ikeja Airport this June after a TV interview. We took Ikorodu road to avoid traffic. The experience was appalling. I was surprised. All the good things they said of APC in Lagos, why was that road so wretched? As we dodged potholes and scraped the bottom of our car, I prayed for Nigeria. The entire stretch of road was just a few kilometers; why did governor Fashola not think of the poor masses who ply this road everyday and try to speed up their lives and improve their health by repairing it with just a few millions so they can get to and fro more quickly and achieve more for themselves, I wondered? 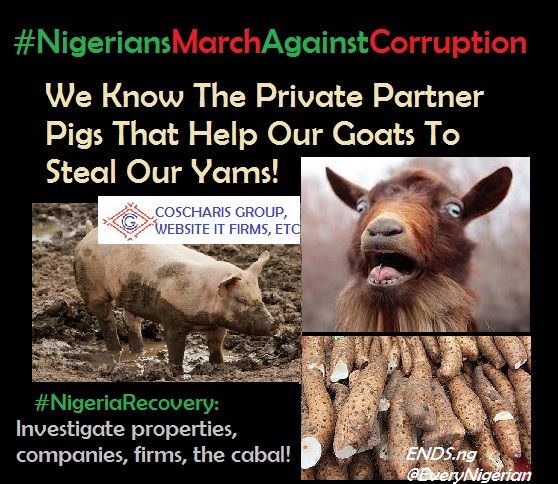 Since Fashola cancelled Okada motorcycle transport in Lagos it has gotten quite impossible to get anywhere on the mainland within reasonable time. It’s just impossible. And there is nothing he did about that in his eight years. How many years of governors like him do we need to move around faster in Lagos? The BRT bus lanes with concrete barriers is ridiculous to me. There could be much more reasonable planning, but we understand it was a honest attempt from his limited experience/consultation.

The bitter truth is, governor Fashola does not see the poor masses. Being a man of fortune, fortune bestowed on him by the Wale and Bola Tinubus, he has come to associate with the Elite and forgotten his rather humble beginnings. His roadmap for the development of Lagos was about the Islands, Lekki, Eko Atlantic and ease and access for the wealthy.

Towards these, Fashola took the most humongous loans, and sold bonds, binding Lagos in eternal debt to house and cater to a few. Of the N400 billion Lagos owes, how much was for projects for the poor? Half a trillion naira and next to nothing for us!

All the poor got from this money was bulldozers. Bulldozers clearing them out of the slums they lived in to beautify the State for the affluent. I’ll like to ask, how many Projects: poor housing complexes did Fashola build with the billions of naira borrowed? Someone please point these out to me. Any reasonable government MUST provide welfare and build housing for the poor. We see these “projects,” Public housing constructions in the US from the early 20th century. They are not exorbitance but town planning common sense.

As I landed in Nigeria, luckily invited for the Presidential inauguration, I was contacted by a top US body. They interrogated me on Eko Atlantic and the Halliburton scandal. I was confused at the time; you see, I had focused my last couple of years advocating for Nigeria’s masses against the corrupt Jonathan PDP government, I had paid little attention to other matters. What were these people trying to do, I pondered, what were they aiming at? I said what I knew. We talked about Atiku, Obasanjo, the Chagoury brothers. Then I perceived they wanted to spoil my fun. I am going to celebrate and you have this can of worms… but later I understood.

It was no coincidence that before Buhari’s maiden trip to the US, he reopened the Halliburton scandal. It was likewise no accident that Governor Fashola was not taken along on the trip to the US.

I used to be one of Fashola’s greatest fans, but this was until he romanced Aliko Dangote and expelled poor settlers from their land to make way for Dangote’s refinery without consideration, compensation or any reasonable attempt at fair relocation. This was the turning point for me. I recognized the mark of the Elite on Fashola’s forehead as I saw those families bloodied and crying for help.

The Elite in Nigeria are one family. Look at them, north to south. They marry each other, support and defend each other to the death and not only steal from the masses but fight to deprive the masses to subdue and keep them (us) in a state of perpetual slavery and deadly deprivement. Fashola is a Cabal, he is an Elite. he is like our National Assembly, usurpers of billions.

Eko Atlantic will house only 250,000. 250,000 wealthy people. There is no accommodation within or nearby for us masses. The billions are being borrowed and siphoned to construct the project through one of Nigeria’s record most corrupt construction conglomerates.

I advise my readers to visit the Guardian article on this: “New, privatized African city heralds climate apartheid:” http://www.theguardian.com/environment/true-north/2014/jan/21/new-privatized-african-city-heralds-climate-apartheid

Permit me to quote:

“Sixty percent of Nigeria’s population – almost 100 of 170 million people – live on less than a dollar a day. Preventable diseases are widespread; electricity and clean water hard to come by. A few kilometres down the Lagos shoreline, Nigerians eke out an existence in the aquatic slum of Makoko, built precariously on stilts over the ocean. Casting them as crime-ridden, the government regularly dismantles such slums, bulldozing homes and evicting thousands. These are hardly the people who will scoop up square footage in Eko Atlantic’s pricy new high-rises.

Those behind the project – a pair of politically connected Lebanese brothers who run a financial empire called the Chagoury Group, and a slew of African and international banks – give a picture of who will be catered to. Gilbert Chaougry was a close advisor to the notorious Nigerian dictatorship of the mid 1990s, helping the ultra-corrupt general Sani Abacha as he looted billions from public coffers. Abacha killed hundreds of demonstrators and executed environmentalist Ken Saro-Wiwa…”

These are Fashola’s bedmates, these are the pigs that Fashola rolled with, and this is how the former governor got dirty.

I recently engaged an activist who defended Fashola; note that I did not use the word “advocate” for this important person as I see that later word which I use to categorize myself as one that has to have a community advocated for, one this person seems to loose daily, unless advocacy for the Elite, Senators and Cabal counts. So as I said, an activist sought to defend Fashola’s spending N78 million on a website in his name. The activist said he found it hard to see Fashola’s corruption in this “trivial” sum when the former governor handles trillions. Twitter handle, #IBelong2Nobody ‏@stanwalka responded to him: “Mr, find time to read this. Your argument holds no water this time around. https://en.m.wikipedia.org/wiki/Salami_slicing … @EveryNigerian #SalamiTechnique…” Salami slicing: from little here and there, we can covet billions. And then, this “little” I bet was used to pay and raise boy-boys, just as one day he too received “little’s” to be raised. Again, “little” to you maybe be all to me and mine.

N78 million would make Ikorodu road much more pleasant for the millions of daily commuters. For the awareness the website allegedly brings, projects for the people will sing the governor’s praise quadruple times louder across the earth and to the heavens.

You may ask as I lay it bare against Fashola, if I am a Saint myself. Of course not. Catch me and lock me up and toss the key. In fact I recently declared that if I had to volunteer to be sentenced to jail as a condition for former president Jonathan and his administration to agree to be locked up and stop obstructing our desperately needed war against corruption, I will run to prison and auction my freedom. For Nigeria to be better, I am willing to pay the price even if it includes my liberty. That our children will have a developed and sane country to survive and be proud in, lock me up!

It is time for Change. Nigeria has no place for former governors like Fashola and most of its current Senators and Assemblymen. This war will continue. We will speak the truth and fight them till they stay with their pigs; away from public office or public conversation.

We thank the Lord for Buhari and Osinbajo who we know in their wisdom have no time to talk to and accommodate these men and women and their pig friends who have locked Nigeria down for far too long.