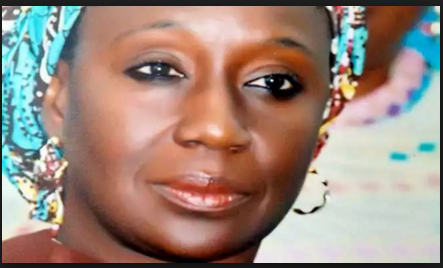 Since the announcement of Hajiya Aisha Abubakar as a Ministerial candidate representing my beloved Sokoto State, a lot of political brouhaha have been going on regarding the person of Aisha Abubakar. Many individuals have expressed their views either in support or against this nomination, citing numerous reasons to buttress their points.

Well, I intended not to join issues with anyone on this ground but being me a indigen of Sokoto State whom Aisha was nominated to represent, i feel voicing my personal opinion is also imperative. Though i believe all these heated debates either in support or against the nomination of Aisha are for the interest of democracy but to be frank, i found almost all the reactions to be totally baseless, childish and uncalled for.

Basically, what drawn my attention to this whole subject is the political brouhaha going on within and outside the state owing to lack of patroticism, vested interest and ignorance. Some influential figures in the state are all out to assassinate the character of Hajiya Aisha Abubakar and hell-bent on bringing her down against all decorum just to satisfy their selfish interests and that of their paymaster.
After recruiting some media attack dogs to blackmail and tarnish her credibility, to an extent of requesting her withdrawal from the ministerial nominee list for no define reasons. They hired thugs and unambitious women under the aegis of “Concern Women Group of Sokoto State” to stage shameful protests all in an attempt to disqualify and get her substituted for their low profile political godfather.

The real reason behind these shameful exhibition of ignorance according to a petition they submitted on the floor of the red chamber; they claimed that albeit Aisha Abubakar is from Sokoto state but she is not known by 99% of women in the state and therefore she should be replaced by a more popular choice. This is one of the most callous and pointless reason that can be told only to the marines. When does it became a law that a ministerial nominee must be known by at least 99% of same gender people in his/her state? This is the highest form of ignorance and lack of idea but nonetheless, i blame Senator Gobir for even having the time to entertain such garbage not to mention of submitting it for consideration.

Another pointless point they raised goes on to say that Aisha Abubakar spent her service years abroad and she never served Sokoto State in any capacity, therefore she’s not qualify to represent the state. Although they may be right to some extent, it is true that Aisha never served officially in Sokoto state but whether she served in the state or elsewhere, she has immensely contributed her knowledge, time and energy serving Nigeria for decades and unless you ceded Sokoto out of Nigeria, then Aisha has perhaps ser served the state since it is a Nigerian state. Moreover, which section of the Nigerian constitution mandated that someone must officially served his state before being considered for ministerial appointment? We saw several scenarios where hundreds of Nigerians were called from UK, US and several foreign nations to come back home and take up public appointments just because they are fit for the job. And to the best of my knowledge, Aisha Abubakar spent her entire working career serving Nigeria if not her stay as a Senior Bilateral Cooperation Officer at African Development Bank, Abidjan, Ivory Coas for a period of only four years between 1993 – 1997.

The naysayers went on to state that “her nomination has created a lots of sceptimism and worries among the generality of the people of Sokoto state.” This is not true! I am currently in Sokoto state and i can confirm that this claim is nothing but a lie, as there’s no such sceptimism and worries among the peace loving people of Sokoto state, if not for those hired and paid to protest against her nomination.

The bitter truth is that Hajiya Aisha Abubakar is not only an indigen of Sokoto State but from the Sultanate Royal Family, being her among the descendants of the legendary Usmanu Ibn Fodio. Like her or not, but the palpability that she possessed all the educational requirements, experience, dedication, credibility, integrity and exposure to represent any state or even the country anywhere in the world cannot be disputed. She’s loyal, humble, educative, religious, caring, honest, charismatic and above all, a technocrat.

It is however idiotic to insist that Aisha didn’t deserved to be a minister based on the fact that she never stayed in Sokoto for a long period that will enable her know and mingle with the people. Since the return of democracy in 1999, Sokoto state has been producing as ministers people who served the state in various capacities and people widely known by almost every resident in the state, but I doubt if it exist a single achievement that all these so-called past ministers brought to the development of the state. I stand to be corrected.

Have we forgotten so soon the words of President Muhammadu Buhari while addressing American government in New York just three months back?

The president has came out to tell the world that he would not only appoint patriotic Nigerians but decent and experienced ones as ministers, people who are committed to the progress of Nigeria and clean hands who have never soiled their palms with corruption irrespective of religion, tribe, gender or political inclination. So any claim that Aisha Abubakar has never being a member of the APC or any political party is totally bullshit, Aisha was nominated based on merit not on political ground or compensation. Must you belong to the ruling party or any political party before you can be considered for ministerial appointment?

It is in view of the aforementioned, that any attempt to challenge Buhari’s choice of ministers will be perceived by we (the masses) as a fight against our national development, it’s also an act of distraction to sabotage the ‘change agenda’ of President Muhammadu Buhari toward rebuilding a new Nigeria for all to be happy. It is vexatious and absolutely hypocritical for anyone to oppose Buhari’s choice of ministers especially those in the APC akin to what is presently going on in Sokoto state, Buhari has made a choice and therefore his choice must be respected. I expect strong opposition if the chosen ministers failed to deliver but as for now, it is uncalled for.

The brain behind this whole brouhaha is nobody rather than a certain siren addicted senator who wants to abandon his senator membership owing to lack of legislative exposure and take up a ministerial role, he’s singly the chief sponsor of this conspiracy for some selfish reasons best known to him alone. While all those making noisy protests aren’t doing so for any define or articulated reason of their own, rather than to please the selfish and undemocratic desire of a non respected parliamentary commodity in the state.

To make things clear, Aisha Abubakar must not nor does anybody have to obtain an associated degree from the University of Pittsburgh in the United States of America or claim to have Masters degree from Ahmadu Bello University Zaria before qualifying for a ministerial job. She might not be popular in town because she don’t go around throwing out wads of naira to the people on the streets in a free-for-all manner which obviously cannot be a reason for her disqualification. She might also not be fit for a ministerial appointment because she don’t walk around with thugs causing havoc and chaos to the peace of the masses if that’s what the naysayers considered party loyalty.

The naked truth is that nobody can force the President to appoint someone whom he wouldn’t be comfortable working with and when he does, both the president and the naysayers themselves will pay the price of their inability to deliver as promise. The immediate past regime of former President Jonathan which sacrificed merit on the alter of vested interest remains a classical example for anyone wishing to learn. What is more important is that neither the protesters nor their paymaster can falsify the fact that Aisha Abubakar is perhaps fit and qualified for appointment based on nothing but merits.

What is even more alarming is that instead of the APC leaders in Sokoto state and their dubious godfather to hail Buhari’s determination to form a cabinet full of technocrats and join the president to deliver his “change agenda” down to the local level, they are now cowardly pressurizing him to appoint political a nuisance into his government, all in their desperation for a safe landing.

Alas! When merit is sacrificed on the alter of sympathy, compensation or vested interest. Then surely, the inevitability of backwardness is absolutely guaranteed. Aisha Abubakar will deliver, i am optimistic she will give us reasons to be proud of. Indeed, if it is a matter of eating and not of selling, then the hen is better than a horse.
This mail is officially sent by Usama Dandare.