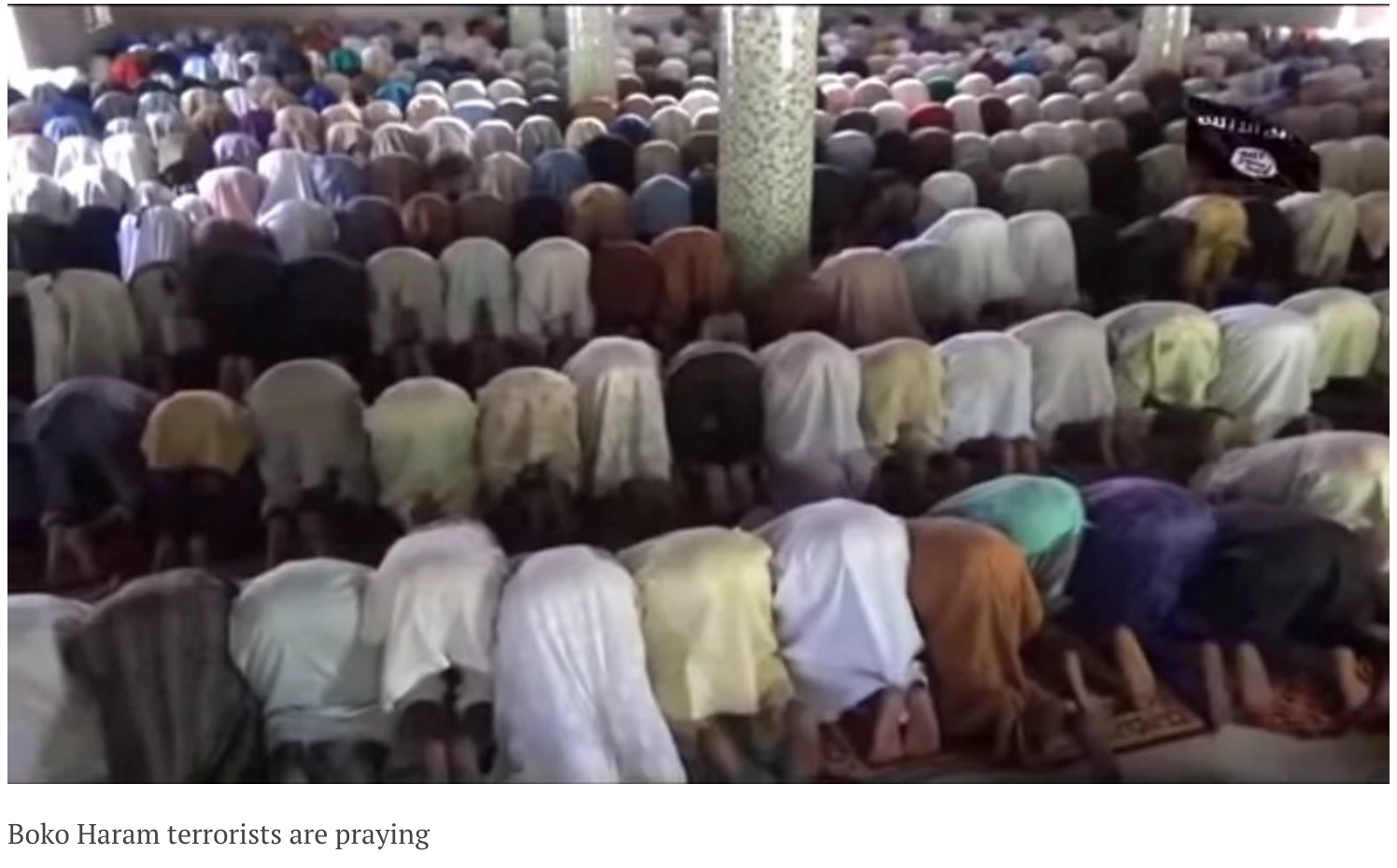 While the Federal government of Nigeria has repeatedly announced that Boko Haram no longer holds on to any territory in Nigeria, the commander of the United States Africa Command (USAFRICOM), David Rodriguez in March this year challenged that claim. Boko Haram “does own some significant territory in northern Nigeria,” Rodriguez told the Senate Armed Services Committee in Washington.

In January of this year President Muhamamdu Buhari had said to the UN Sec. Gen. at a summit in Abu Dhabi, that Boko Haram was “currently not holding any territory.”

Evidently from the latest video released by the group, there are still at least a couple of thousand members of Boko Haram able to freely assemble in Nigeria.

In the videos the alleged terrorist group members did not cover their faces as they were not trying to hide their identities. This clearly means that these large numbers in the thousands live in their own Boko Haram towns and villages and not incognito within regular communities.

It is impossible for such numbers of people to live undercover or underground. The numbers seen in the latest video must occupy decent land.

On estimate, the minimum area of arable land to support one person in most congested conditions is 0.07 of a hectare, that’s 7 hectares per thousand people. And for at least 5000 in the video which did not show the female and children populations which could blow up the numbers to double or quadruple those seen in the video, we would have at least 35 to 140 hectares of Boko Haram occupied territory. That’s about 35 to 140 football pitches, minimum but expected to be much more. The Nigerian military has deliberately blocked and censored most information coming out of the northeast, so accurate details are impossible to determine.

Another thing that could be observed from the video was the relatively well-fed appearance of the community. Unlike Nigerians currently in camps for the internally displaced, IDPs, who are suffering and dying from severe malnutrition, the terrorists appeared well fed, well dressed and of good wellbeing. This would mean that they are occupying villages where they have lots of arable land where they cultivate their crops and they also command large numbers of livestock for dietary protein and thus have access to natural water sources where the livestock are hydrated.

Boko Haram appear to be living large in our farming villages while the decent villagers are cramped up and dying in their dozens daily in congested camps with sparse food, water and poor sanitation.

When the news broke earlier this month that the “Shekau” faction of Boko Haram and the Barnawi one were fighting each other, it was immediately apparent that they both were quite comfortable and occupied sufficient territorial habitation.

A certain Mele Kaka had told AFP as reported in the Vanguard that the villages of Yele, Arafa and Zuwa village in nearby Marte district were all occupied by loyalists of Shekau. The report did not list the villages occupied by the Barnawi sect.

From the above, we can safely draw the following conclusions:

It is evident that Borno’s farming villages are still occupied by Boko Haram.

Terrorists are feeding fat on the rich farmlands of Borno while IDPs die of starvation in camps.

It appears the Chief of Army Staff Tukur Yusuf Buratai is either auspiciously clueless of the reality that several farming villages are occupied by thousands of Boko Haram terrorists, or he is being willingly oblivious of this fact and is lying to President Muhammadu Buhari that there is no territory under Boko Haram control.

It can be concluded that the war against Boko Haram is far from over and is in a controlled lull at best at the moment.

Is There An Accord Between Buratai and Boko Haram?

We had this same problem under Jonathan claiming he did not know where Boko Haram was, which made us then publish the articles,”National Security Update: Details Of The Sambisa Camps Holding Our 200 Abducted Daughters” and later, “Cities In Sambisa And Myths Of Booby-traps.” Boko Haram has never been inconspicuous and still isn’t. Our Civilian-JTF always locate them when the army claims they can’t.

It would be highly impossible for the numbers seen in the video to exist without some sort of relationship with the army. The Nigerian army led by a Borno indigene, knows where they are and has decided not to massacre them as it does to others groups of individuals across Nigeria from Zaria to the south east and south south.

If as is evident, the terrorists occupy these villages and the Nigerian army is not doing anything about it, what is the mutual arrangement between Buratai and the villages of Boko Haram and why is there such a private accord?

Is it only terrorists who step out of the areas where the Nigerian army may have agreed that the communities of Boko Haram should restrict themselves to that the army kills once in a while? We do know that in Boko Haram’s heyday, there were no fewer than 30,000 members. The military has never produced evidence of killing or capturing more than a few thousand. The latest video substantiates this analyst calculation.

While it is unreasonable and would be totally inappropriate to expect the Nigerian army to wipeout the entire thousands of terrorists who still maintain their own state within the Nigerian state, the citizens of Nigeria deserve to know the true predicament and be a part of determining a final solution to the crisis.

Implications As Boko Haram Threatens The President of Nigeria

How do we deal with thousands of Boko Haram terrorists and inadvertent recruits, members and abductees residing in whole villages in the northeast?

There must be an open concrete plan to arrest all these members and charge and capitally punish all guilty of murder or rape, and sentence other members while punishing and/or rehabilitating as courts decide, those who have not been involved in criminality. Any arrangement with Boko Haram that allows their coexistence within the Nigerian space is unconstitutional and a violation of Nigeria’s sovereignty and security. More so as Boko Haram is a most existential threat considering the fact that in their latest video they have gone as far as issuing a direct threat at the President of the Federal republic of Nigeria.

The Nigerian military does not have the authority to create a community-amnesty arrangement with these wanted terrorists who have killed tens of thousands of Nigerians, displaced millions and destroyed farmlands and the economy, thereby causing untold hardship and deaths to locals and Nigerians at large.

It is necessary the Nigerian army comes clean to the Presidency and Nigerians at large. We must as a nation decide how best to deal with the remnant threat of Boko Haram. We applaud our soldiers who have stayed steadfast and continued to make the ultimate sacrifice, combatting Boko Haram terrorists in the northeast. We understand that the military is stretched thin and to capacity and thus we continue to offer our services as volunteer forces willing, able and ready to join the Nigerian army combat and capture these thousands of terrorists. The Civilian-JTF which consists/consisted of tens of thousands of able youth, ex-soldiers, hunters and other Nigerians have shown their commitment and offered their patriotic assistance to join the Nigerian military in this battle. It is time this offer is seriously considered. Boko Haram has resurged too many times in Nigeria’s history for an incomplete mission to be in any way acceptable. The defeat of this menace must be total and complete.