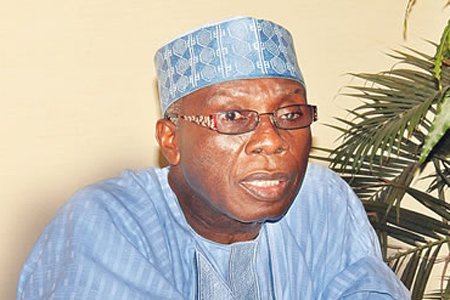 The Minister of Agriculture and Rural Development, Chief Audu Ogbeh, on Wednesday in Abuja said Nigerian businessmen demanded 2.5 billion dollars (about N492 billion) a week for importation of goods and services into the country.

Ogbeh made this known in a meeting with officials of VICAMPRO, an indigenous Agro Company investing in production of Irish Potato on Wednesday in Abuja.

He said that the ministry was willing to support local investors with capacity to produce goods and save the country’s foreign exchange.

He said that the consumption of rice in the country was rising and that a lot of people were not aware that the rice had some degree of arsenic.

The minister said that consuming rice in large quantity on a regular basis was a bit of health risk, adding that substituting it with potato would be welcomed development.

“The volume of importation of virtually everything into this country is too much.

“The demand for dollars in this country as at today is 2.5 billion a week; this is the quantum of dollars Nigerians are asking for to import things.

“Since 1986, we began this habit of importing everything and doing virtually nothing at home to sustain ourselves; now, we do not have the dollars and people are very hungry.

“This day was coming anyway, no matter who was in power; we have the most ridiculous method of devaluing our currency; every week, we auction the dollar and naira goes up.

“We sat and were hoping that by devaluation, we are going to arrive at Eldorado; if we continue like this, it will be a thousand naira to a dollar,’’ he said.

While commending the investor, Ogbeh said that any private sector effort that would develop local production of goods would be fully supported by the ministry.

“We should aggressively take the West African market; there is no reason why we should allow Irish potato from Ireland and France and Belgium into West Africa; it is the same story with onions.

Earlier, the Chief Executive Officer of VICAMPRO, Mr Michael Agbogo, said that potato could bring value worth over one trillion naira annually if properly harnessed.

He said that potato was the fourth most important crop in the world and that a barrel of oil was an equivalent of 14 kilogrammes of potatoes.

He said that in terms of value, potato had three times the value of crude oil, adding that it was a huge industry the country could get into.

Agbogo said that Egypt and Algeria were the leading potato producing countries in Africa, with Egypt producing four million tonnes annually from about 100,000 hectares of land.

He said that Nigeria, which had close to 500,000 hectares, was struggling to produce one million tonnes of potato per annum.