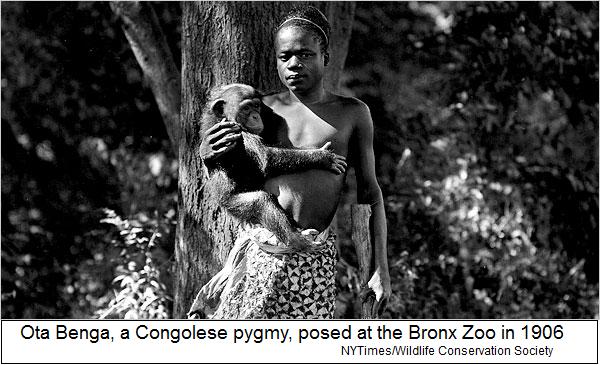 100 years ago, on March 20, 1916, Ota Benga took a gun and fired a bullet into his own heart, ending the short and tragic life of the “missing link” from Africa.

His treatment at the hands of so-called gentlemen from New York’s Bronx Zoo and the 1904 World’s Fair in St. Louis, Missouri came in the height of the eugenics movement, forty years after the end of (legal) slavery in America.

We remember our dear brother Ota Benga, An African subjected to the inhumane treatment of “Human Zoos” in the 1900s pic.twitter.com/7u7pc9MChK

Today, Benga is remembered for his sacrifice in documentaries and on social media networks like Twitter, a martyr for the cause to end racism.

The 32-year old Mbuti man from along the Kasai River in what is now the Democratic Republic of Congo stood just four feet, eleven inches tall and had teeth filed to sharp points, which was reportedly a tradition for his tribe.

His early life in the forests of Belgian Congo were violent and his wife and two children were killed by the Force Publique.

Wonder what Saartjie Baartman would think about the descendants of her captors striving to have her ‘obscene’ body pic.twitter.com/suZZF6rGcR

How Verner came to “acquire” Benga is unclear, with the “pioneering” Presbyterian missionary claiming to have “saved”him from a cannibalistic tribe who had kidnapped him.

Using Benga as a recruitment tool who could downplay the rightfully-distrustful attitude about white men, Verner managed to find more natives and brought them all to the US to be part of the exposition’s human displays.

The controversial exhibit showed real humans from a number of “exotic” ethnicities dressed in their native gear on a staged reproduction of their homes.