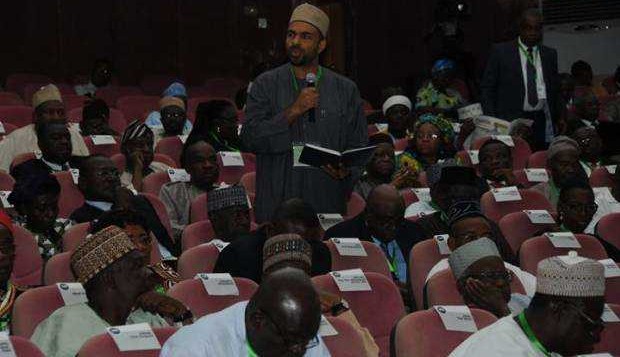 Since the commencement of debate on the president’s speech at the national conference, the chairman placed embargo on clapping.

However, that embargo was overturned by delegates after a rousing and electrifying speech by a delegate representing the Supreme Council for Islamic Affairs, Alhaji Nurudeen Lemu from Niger State.

His speech got a standing ovation and thunderous round of applause.

Here is the transcript of the speech:

Alh. Nurudeen Lemu, a delegate from the Supreme Council for Islamic Affairs

One tendency for people who claim to follow a religion is to slide into the position of believing that we are better than the others. We overestimate our virtues and underestimate the goodness in others. The tendency is for us to become spiritually arrogant; to forget that others are people like us.

There is always a tension between representing our religious communities or our ethnic communities and our loyalty to the virtues and values and teachings of our religion even those lofty ideals of our ethnic groups.

It is our prayer that delegates will try and ensure that the spiritual strength we have in us will keep us from not getting angry and not allowing our bitterness from others to make us sail from justice. It is in this vein and as a delegate from the Supreme Council of Islamic Affairs, we condemn the murder of all Christians, we condemn the murder of all Muslims. Not because they are Christians or Muslims, but because they are human beings – creatures of God.

There is no compulsion in religion. We all own Nigeria. We all belong here. And we all have the right to self-determination. We should respect that right and do unto others what we will do unto ourselves.

There are many other countries that have ethnic and religious diversity far greater than what we have here in Nigeria. But something that distinguishes us from them, be it Singapore, United States, they have been able to respect the rule of law so that any bigot, any nepotic individual who tramples on the right of anyone especially that of the minority, the rule of law will catch up. Satan will only find a hole if there is a crack in that rule of law.

But ultimately, we are all visitors to this planet, from God we come and to Him we return. As Muslim delegates, we come in brotherhood, as brothers and friends to solve our common problems and not as adversaries.

I pray that at the end of this conference, we will all grow in our humanity and respect for each other.