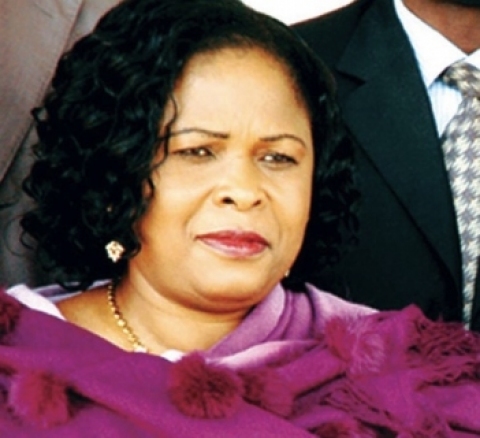 Unbeknownst to Nigerians, the wife of the current president was caught twice by the EFCC while Goodluck Joanthan was governor of Bayelsa state, attempting to launder a total sum of $13,650,000

This was re-exposed by a new Nigerian website for crime, the Nigerian Criminal Database. View post below: 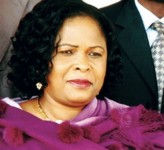 About N104m allegedly laundered by Patience, wife of Bayelsa State
Governor, Dr. Goodluck Jonathan, has been temporarily seized by the
Economic and Financial Crimes Commision.
The seizure came on the heels of an ex parte application before a
Federal High Court, Abuja by the Chairman of the EFCC, Mallam Nuhu
Ribadu.
The commission had in the application, a copy of which was obtained
by our correspondents on Sunday, said it suspected that the N104m
was public money.
It said that Patience laundered the sum in two tranches – N70m and
N34m – through one Mrs. Nancy Ebere Nwosu.
Nwosu, a business associate of Patience, is said to have made
statements to the EFCC incriminating the governor`s wife.

September 13, 2006: The Governor of Bayelsa State, Chief Jonathan Goodluck, on Tuesday said he would cooperate with the Economic and Financial Crimes Commission to unravel the mystery surrounding the alleged laundering of N104m to which his wife, Patience, has been linked.By Tobi Soniyi and Musikilu Mojeed Read more…

$13,000,000: On September 11, 2006, the Economic and Financial Crimes Commission (EFCC) seized $13.5 million dollars (US) from Mrs. Patience Jonathan, the wife of then Governor of Bayelsa State, Mr. Goodluck Jonathan.

The International Herald Tribune quoted the EFCC spokesman, Mr. Osita Nwajah, as saying that the seizure was made after Mrs. Jonathan had allegedly laundered the money through an associate.

It was the second time in one month Mrs. Jonathan was hitting the scandal headlines. In August, the EFCC had obtained a court order to temporarily freeze N104 million she had allegedly tried to launder through one Mrs. Nancy Ebere Nwosu. The EFCC said it had reason to believe the seized funds belonged to the public. In a sworn statement, Mrs. Nwosu implicated Patience Jonathan, the EFCC said.

But remember, her husband was the Bayelsa State Governor at the time. And Mr. Jonathan’s government dashed to the defence of the First Lady of Bayelsa, alleging that the reports were part of a “plot to destabilize” the state. Government spokesmen were falling over each other to speak for Mrs. Jonathan. The Governor’s spokesman, Dennis Sami, described the allegations as a “charade,” the target of which the Governor. -Sonala Olumhense
—

A civil society group, Coalition Against Impunity and Illegality (CAGIL) says it will continue with its suit against the EFCC for refusing to and bring to justice, the First Lady, Mrs. Patience Jonathan, over allegation of money laundering to the tune of $12.5 million (about N1.9 billion).

The suit, which was filed at a Federal High Court in Lagos is praying for an order of Mandamus, compelling the EFCC to either prosecute the First Lady or make an official clarification on the allegation. Filed by the law firm of Rhaman Senge, under Order 34 Rules 1 and 3 of the Federal High Court Procedure Rule 209, the suit wants the court to declare that refusal or failure of the EFCC to act by prosecuting the First Lady is abdication of its public duty, imposed on it by Sections 6 & 7 of EFCC Act of 2004. According to CAGIL, the anti-graft agency had publicly declared on September 11, 2006, via its then spokesman, Osita Nwajah, that Mrs. Jonathan, who was then the First Lady of Bayelsa State, was nabbed at the Murtala Muhammed International Airport, Lagos, while attempting to smuggle out a whopping $12.5million.

The EFCC then claimed that it immediately impounded the money, while adding that another sum of N104 million was traced to her foreign account, which the commission believed was far beyond her legitimate earnings as at the time. CAGIL wondered why the story was ended just like that, regretting that Nigerians who eagerly expected justice in the case had waited in vain for more than four years. “It is not on record that the EFCC took further actions on those startling revelations. At least, Mrs. Patience Jonathan, to public knowledge, was never subjected to any legal actions. Are we in a country where some are more equal than others?,” CAGIL asked. The group went further to state that: “The First Lady has no constitutional immunity. She should be given the opportunity to defend herself. We seek a comprehensive legal action on this matter and call on the EFCC to take necessary steps to recover the money traced to her foreign account to the coffers of the Federal Government or Bayelsa State, if that is where it belongs without delay and make the First Lady face justice, if found culpable,” the body insisted.

The group’s General Secretary, Comrade Mark Adebayo, said CAGIL deliberately allowed the April General elections to be successfully completed before taking up the First Lady’s case because the body does not want to be misconstrued and labeled as working for the opposition. He explained that since President Goodluck Jonathan has not shown that he is influencing the anti-graft bodies in the performance of their duties, it behooves the EFCC not to leave any room for suspicion. The civil society group had earlier on June 27 petitioned the EFCC not only on the First Lady’s case but also on the commission’s foot-dragging in recovering from prominent Nigerians the N40billion looted funds of the defunct national carrier, the Nigeria Airways Limited (NAL). “The Nigeria Airways was the safest national carrier in Africa in the 1970s-80s but a combination of mindless corruption mal-administration and policy misdirection led to its collapse prompting the former President Olusegun Obasanjo to institute in 2000 a seven members probe panel led by retired Justice Obiora Nwazota to look into its demise and recommend appropriate sanction. Findings of the Justice Nwazota panel which were accepted by the government was scandalously shocking as its revealed that a whopping total of $254,257,529.65 million; £1,792,796.72 million and N548,380,248,38 million (totaling N39,045,569,039,88 billion ) was looted from the NAL through tax fraud, contract inflation, ticketing scam, fake projects, commissions scam, fake premiums, bonds and loans; misappropriation and outright stealing. The panel also recommended the swift recovery of all the stolen money of NAL and criminal prosecution of those indicted.