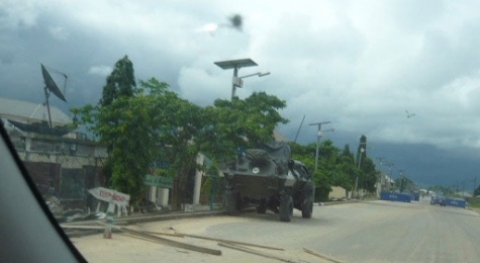 A few days after the Goodluck Jonathan administration withdrew operatives of the Joint Task Force assigned to protect Government House in Rivers State, SaharaReporters has learnt that the president’s wife, Patience Jonathan, is using soldiers to guard her private guest house in Yenogoa, the capital of Bayelsa State.

Earlier this week, the Presidency ordered the withdrawal of JTF operatives guarding the official residence of Governor Chibuike Rotimi Amaechi as a political feud between the governor, on the one hand, and President Jonathan and his wife, on the other, intensified. There was chaos in the chambers of the Rivers State legislature as four state law makers tied to the president and First Lady attempted, but failed, to impeach the speaker. In the aftermath of a bloody confrontation, the Jonathan administration pulled Mr. Amaechi’s security apparatus, which is controlled by the Federal Government.

By contrast, soldiers paid by Nigerian taxpayers are deployed to keep round-the-clock guard at Magels Resort, a commercial guest house owned by Mrs. Jonathan. The guest house has been shut down for several years and is undergoing extensive renovation that began about six weeks ago. In addition to the presence of armed soldiers, a brand new armed personnel carrier is also permanently stationed at the premises of the First Lady’s guest house.

Apart from the guest house, Mrs. Jonathan also owns a five-star hotel in the Okaka area of Yenagoa. The hotel, which construction was recently completed, is also heavily guarded by operatives of the JTF.

Mrs. Jonathan, who is notorious for greed and corruption, has acquired extensive landed properties in both Rivers and Bayelsa states. Her desire to control the politics of her home state of Rivers State is a big element in a simmering political crisis that turned bloody this week. Law makers loyal to Mrs. Jonathan stormed the state legislature with a contingent of thugs in a daring attempt to hijack the leadership of the legislative body.

Outraged by the absurd turn of events, Nobel laureate Wole Soyinka called on President Jonathan to restrain his wife’s meddlesomeness in the affairs of Rivers State.

Mrs. Jonathan bankrolled the lavish wedding ceremony of one of the four lawmakers who spearheaded the chaos in the state assembly.