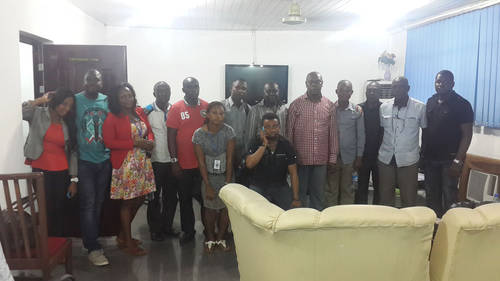 New information emerging on plans by the ex-militant known as Tompolo to use security agents and some top government officials and President Goodluck Jonathan’s close allies in Abuja to jail the freed 14 journalists he kidnapped on Sunday show that he actually gave specific instructions to the presidency and the security chiefs about his victims.

For many hours in two segments, those instructions by the wealthy and powerful former Delta militant saw several innocent journalists and other citizens deprived of their freedom while Tompolo walked free and manipulated the government to suit his wish.

The journalists were in the Delta creeks to cover the massive protest that was staged by Tompolo and his kinsmen against President Goodluck Jonathan, who was to have broken ground on Friday for the controversial $16billion Export Processing Zone project.

SaharaReporters has reliably gathered that Tompolo, whose real name is Government Ekpemupolo, forced some of the kidnapped Itsekiri youths, along with Daily Independent’s Arubi, who is coincidentally Uduaghan’s kinsman, to hold up firearms belonging to Tompolo, parading and photographing them in that pose.

He then immediately forwarded the stage-managed photographs to the presidency and the security agencies in Abuja, with the story that the journalists had been caught with the firearms and that they were working for the Delta state government to attack the Ijaw people following the botched EPZ groundbreaking event.

A security source who confided in SaharaReporters said Tompolo, using that manufactured situation, warned the top government officials and the security agents against releasing the journalists, who had been released after their first kidnap but were again detained at the navy facilities in Warri.

On the basis of the Tompolo warning, the journalists were again detained for over seven hours at the navy base.

“Can you imagine that Tompolo now gives orders to government and security agents on who to release and not to release?” our security source asked.

“Normally, after the Journalists were freed from their kidnappers’ den and handed over to us and we took them to Warri, and it is our duty to ask them to go home but as soon we got our office here in the Navy base in Warri, an instruction came from Abuja that the journalists should be detained immediately and without wasting of time we detained them,” he explained.

“From that 7am in the morning when we brought them to our base, several calls started coming from Abuja as well as from the presidency that they must not be release because there are photo evidences against them that actually they were caught with firearms. From there we were told that some pictures framing up the journalists were forwarded by Tompolo to the presidency and some security agents in Abuja and the pictures were already on the social media.”

He stated that as operatives of the navy, they were aware that the journalists were being framed that their hands were tied because of the incessant orders coming from Abuja, adding that subsequent reports by colleagues of the detained journalists assisted in their regaining their freedom.

“Especially the online media, they did a very marvelous job in seeing that their colleagues were released and we commend them. When the heat was becoming unbearable for those in Abuja, at about 5pm we got a call from the presidency that they should be released and they were immediately released,” he stated.

Meanwhile, Governor Emmanuel Uduaghan has condemned the kidnapping of the journalists, describing the action as “unfortunate,” adding that President Jonathan has ordered a full investigation into the incident and that those found guilty would be punished.

He made the remark on Tuesday in Asaba during the 2014 press week of the Delta State council of the Nigeria Union of Journalists, during which he blanketed members of the union with sweet talk, perhaps in the hope of avoiding huge lawsuits and electoral fallout that might emanate from the experience.

He said that President Jonathan meant well for Delta to have approved the $16 billion project to be sited there despite the agitation of other states, and that it was unfortunate for him to be accused of hatred for the people to the point of their asking the President and himself, as governor, to resign.

While Tompolo appears to be creating a lot of discomfort for President Jonathan and Governor Uduaghan ahead of the 2015 elections, SaharaReporters has learned that the wealthy former militant, who is now being referred to as a monster, was trained by former Governor James Ibori, Governor Uduaghan, President Goodluck Jonathan and other politicians from the Niger Delta region.

Analysts say that may explain why he seems to be above the reach of the police and other security agencies despite various appeals and petitions that have been sent to them.