The UAE-Israel Deal’s Historicity is in the Fine Print 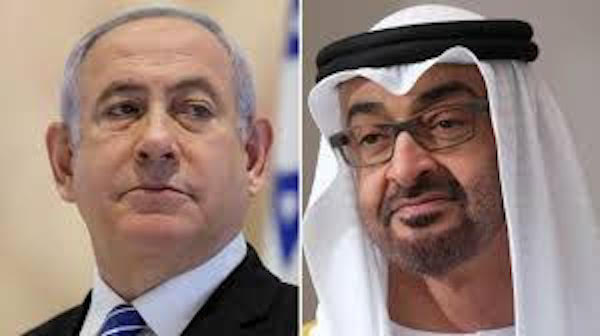 A close read of the agreement between the United Arab Emirates and Israel suggests that the Jewish state has won far more than diplomatic recognition. It won acknowledgement of its claim to historic Jewish rights. By the same token, the UAE has received a significant boost to project itself as a leader in inter-faith dialogue.

Included in the agreement are references that are key to foundational Israeli arguments asserting the right of the Jewish people to a state on what was once predominantly Arab land rather than simple recognition of the fact that the Jewish state exists.

Recognition of Jewish rights has long been a demand put forward by Mr. Netanyahu.

In talks with the Palestinians as well as the building of relations with Arab states over the years, the Israeli leader asserted that mere diplomatic acceptance of Israel’s existence was not good enough. And yet, that was the basis of earlier peace treaties with Egypt and Jordan as well as Palestine Liberation Organization (PLO) Yasser Arafat’s 1988 recognition of Israel and the subsequent 1993 Oslo accords.

From the outset, the Israeli-Palestinian conflict has been as much a dispute about control of land as one of perceived rights.

Recognition of Jewish rights in Palestine bolsters Israeli assertions that its claims to territory occupied during the 1967 Middle East are legitimate rather than a land grab resulting from military conquest.

To be clear, it does not by definition endorse annexation, but it constitutes Arab acceptance of Israel’s position that any compromise between Israelis and Palestinians, a sine qua non for a resolution of their dispute, would involve mediation of claims that are historically and morally on par.

Arabs in the past have projected solutions as the need to address Palestinian rights while accepting Israel’s existence.

The agreement did not explicitly recognize Jewish rights, but enabled Israel to interpret the deal as doing so by stating that “Arab and Jewish peoples are descendants of a common ancestor, Abraham.”

The text of the agreement suggests that the reference was primarily related to allow the UAE to boost its efforts to project itself as a leader of inter-faith dialogue and a moderate interpretation of Islam – a pillar of the country’s well-funded soft power campaign that paints the Emirates as a militarily capable, forward-looking, religiously tolerant and technologically savvy, cutting edge state.

The interpretation of the phrasing as recognition of Jewish rights may have been an unintended consequence or icing on Israel’s cake.

It was a bonus that David Makovsky of The Washington Institute for Near East Policy — widely viewed as leaning towards Israel — was quick to point out. Mr. Makovsky noted that the reference implied that “both (Arabs and Jews are) indigenous to the Middle East.”

Mr. Makovsky suggested that the phrasing “is important because it clearly refutes longstanding allegations in the Arab world that Zionism is alien to the region.”

It puts past to Arab and Palestinian arguments that the long-touted two-state solution of the Israeli-Palestinian conflict was one of dividing up land claimed by two parties driven by facts on the ground rather than consideration of legal and moral claims.

This is not just of esoteric significance. It bolsters Israel’s long-standing rejection of Palestinian insistence on the right of refugees, including those who left during the 1948 war, to return to their homes and lands in what is now Israel.

Israel’s reading of the agreement as endorsement of its assertion that the Israeli-Palestinian conflict is about equally valid rights is likely to be interpreted differently on both sides of Israel’s right-left divide.

The country’s weakened left will see it as highlighting the need for territorial compromise. Significant segments of the Israeli right will view it as validation of its belief dating back to the period prior to the 1948 creation of Israel that the clash of Jewish and Palestinian rights is irreconcilable. That is a view that has historically also resonated among elements of the labor movement.

That may be what makes the UAE-Israel deal truly historic.

The icing on the UAE’s cake, beyond the significant geopolitical, military, security, technological and economic benefits of the agreement, is the stress on inter-faith dialogue.

Under the agreement, the UAE and Israel “undertake to foster mutual understanding, respect, co-existence, and a culture of peace between their societies in the spirit of their common ancestor, Abraham, and the new era of peace and friendly relations ushered in by this Treaty, including by cultivating people-to-people programs, (and) interfaith dialogue…”

The UAE, like Saudi Arabia, one of its multiple autocratic religious soft power rivals, has gone in recent years to great lengths to cultivate ties to Jewish and Evangelist communities and to position itself as a sponsor of an inter-faith dialogue in which Islam is represented by Muslim scholars who preach absolute obedience to the ruler and reject endorsement of the Universal Declaration of Human Rights. Its an interpretation of the faith intended to ensure regime survival and counter allegations of violations of human rights in the UAE.

The signing of a Document on Human Fraternity by the imam of the Al-Azhar Grand Mosque in Cairo, Ahmed El-Tayeb, and Pope Francis I during his 2019 visit to the UAE, the first by a head of the Vatican to the Gulf, served to offer an alternative to the Universal Declaration that allows the Emirates to pick and choose which rights it accepts.

The emphasis on inter-faith dialogue is bolstered and conditioned by the agreement’s implicit condemnation of political Islam, a key driver of UAE policy that is shared by Israel.

The agreement rejects “political manipulation of religions and…interpretations made by religious groups who, in the course of history, have taken advantage of the power of religious sentiment…in a way that has nothing to do with the truth of religion.”

Omar Ghobash, UAE Assistant Minister for Culture and Public Diplomacy, speaking in a US-UAE Council webinar, noted that one driver for the conclusion of the agreement was “what happened around the so-called Arab Spring and then the rise of vicious groups like ISIS, let alone Al Qaeda.”

Mr. Ghobash was referring to the 2011 popular Arab revolts that toppled the autocratic leaders of Tunisia, Egypt, Libya, and Yemen as well as the rise of the Islamic State in the aftermath of the uprisings, which was a product of the 2003 US invasion of Iraq rather than the rebellions.

He projected the agreement as part of the UAE’s institutionalization of its values.

“There is a distortion that has taken place over the last few decades…represented by groups like the Muslim Brotherhood, groups like Al Qaeda and ISIS … There is a recurring theme in conversations with my leaders and that is that Islam has been hijacked by these groups. The reality is that in taking Islam back, you need to free it from those constraints. You free it by presenting a different expression of Islam,” Mr. Ghobash said.

Critics suggest that the agreement’s formalization of Israeli support for the UAE’s propagation of a state-controlled Islam fails to tackle a core issue: the need to address religious concepts that are either outdated or outmoded or require reconceptualization and reinterpretation.

Those concepts legitimized decades of Muslim demonization of Israel as well as Jews, Christians, and other non-Muslims.

The UAE took a first major step to address the issue by distributing to schools barely two weeks after the announcement of the establishment of diplomatic relations textbooks that cite the agreement with Israel as an expression of fundamental Islamic and Emirati values.

However, the ultimate litmus test of the UAE’s effort to shape moderate Islam will be if and when it loosens the state’s grip on religion and allows for free-flowing, credible theological debate in which scholars tackle problematic religious concepts that have served their purpose but are out of place in a modern, forward-looking society.

Dr. James M. Dorsey is an award-winning journalist and a senior fellow at Nanyang Technological University’s S. Rajaratnam School of International Studies in Singapore. He is also a senior research fellow at the National University of Singapore’s Middle East Institute and co-director of the University of Wuerzburg’s Institute of Fan Culture in Germany.

The Nigerian Army And ‘Fatal Arrogance’ By ...