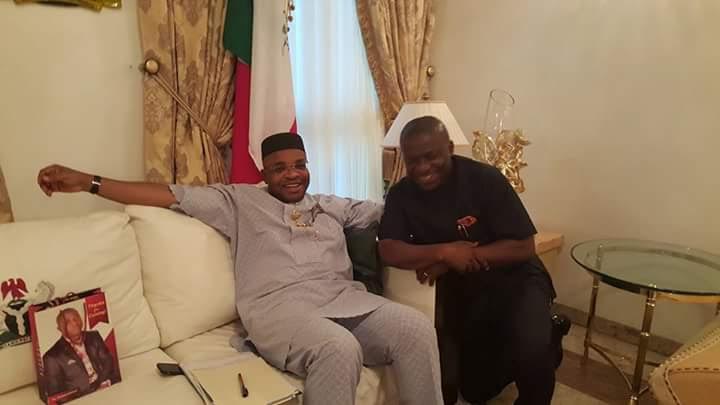 This photo shows Dr Iniobong Essien the Commissioner for Environment of the present interregnum in Akwa Ibom State kneeling before Mr Udom Emmanuel on the occasion of his (Essien’s) 55th birthday yesterday.

What then informed this uncanny obeisance by a man who is older than Udom Emmanuel by age? Eveyone around Udom is required to behave and act as a slave. Recently, another Commissioner, Mr Godwin Ntukudeh declared shamelessly on on air (during an interview session) that his Ph. D is nothing whenever he is with Udom Emmanuel.

Mr Udom Emmanuel has been widely criticized for being too arrogant, pompous and snubbish. He has been derided even by a section of his supporters for treating people with disdain. I once narrated a story of how Udom sacked his Aide during the gubernatorial electioneering campaigns for offering bottle water to supporters after a rally instead of sachet water. I leant this from someone who worked with him at the time.

A senior friend once told me how Udom snubbed him at a funeral service shortly before the election. Udom has never pretended about his contemptuous disposition to simplicity and mutual respect.

Some will seek to exculpate Udom on the excuse that the Commissioner knelt down on his own volition, without being compelled to do so. But that is untenable.

Firstly, it is not part of the culture of Akwa Ibom State for people to kneel while being addressed by someone, it is even a taboo for an older person to knell before a younger person irrespective of status and position in the society. Secondly, it is evident from this photo that Udom sat comfortably in approval of the kneeling exercise. If he was discomfited by the action of his Commissioner he shouldn’t have even allowed the man’s knee to touch to ground. Thirdly, the occasion that this incident took place makes it more offensive and inexcusable. The Commissioner was celebrating his 55th birthday. So why should Udom address a birthday celebrant while he (the celebrant) was kneeling?

What Akwa Ibom State needs at this critical time is a leader and not a maximum ruler. The State cannot be led by someone who thinks every other person is insignificant. After referring to his critics as “Illiterates”, Udom is now subjecting people, including his seniors, to dehumanizing and degrading treatment.

2016 is finally here. All these nonsense will end. Akwa Ibom people will go to the polls to freely elect a leader with humility and respect for his subjects. We have had enough of this egoism by a stooge who was criminally rigged into office.