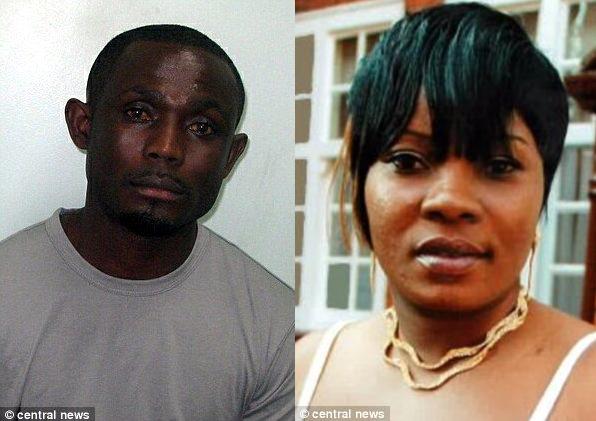 A husband has been jailed for 17 years after he killed his wife by stabbing her at least 15 times then running her over with his car because he thought she was having an affair with a neighbour.

Minta Adiddo sent Akua Agyeman a Christmas card as she was being treated in hospital, blaming the attack on ‘devils’, the Old Bailey heard.

The 32-year-old mother of two died two months after the brutal stabbing, which was witnessed by her five-year-old daughter.

Adiddo, 38, was today given a life sentence after being convicted of murder, with a minimum term of 17 years.

The Sainsbury’s worker from Enfield, North London, had pleaded guilty to manslaughter, although he denied murder.

The court heard he suspected his wife was having an affair with their neighbour Oledapo Etti-Williams in October 2012.

Mr Etti-Williams denied it, but said they exchanged three to four ‘sometimes flirtatious’ texts a day – and phone records showed they had sometimes sent as many as 80 messages in one day.

On November 5, Adiddo stabbed his wife with a large kitchen knife in their bedroom while their one-year-old daughter slept in a cot next to them.

Ms Agyeman managed to escape through the living room window, waking neighbours with her screams.

But her husband chased her down and stabbed her again in the street as she lay on the ground, leaving her with 15 separate stab wounds.

When he realised she still wasn’t dead he got in his car and tried to run her over, almost ploughing into shocked witnesses who were tending to her.

Ms Agyeman’s last words as she lay injured were to ask if her children were all right. Court: The killer was given a life sentence by a judge at the Old Bailey, pictured

She fought for her life in hospital for nearly two months, but she was so badly injured that she would have been permanently paralysed if she had survived.

Adiddo fled the scene but was arrested after police spotted him driving his car shortly the next day still wearing his blood-stained shirt.

In a phone call to a relative he admitted stabbing his wife and said he planned to kill himself before police caught up with him.

When Ms Agyeman was in the the Royal London Hospital, Adiddo sent her a Christmas card ascribing his behaviour to ‘Satan’ and ‘devils’.

‘I know the devil used Williams to destroy our family,’ he wrote. ‘Please, please, please, I need forgiveness from you – open yourself to God.’

In victim impact statements read to the court, Ms Agyeman’s family said the ‘vibrant, sociable and intelligent’ 32-year-old was ‘irreplaceable.’

The judge heard her relatives in Ghana were now struggling financially without her support.

They said they had accepted Adiddo as a son and treated him with respect and dignity ‘but all he has done is inflict pain and suffering on our family’.

The court heard her two daughters are now being cared for by relatives but the family are ‘forever saddened’ she won’t get to see them grow up.

Sentencing, judge Brian Barker QC said: ‘I accept this was not a planned killing but was done out of frustration and temper, and in my view was cowardly and selfish.

‘This was a shocking waste of a vibrant life and loss of a mother which will be long felt.

‘I was moved by the words of her family who described Akua as a loving sister, caring for her children and extended family in Ghana, and providing financially for them.

‘They feel betrayed by your actions and find it very difficult to move on. There is nothing we can do or say to turn back the clock but she will not be forgotten.’