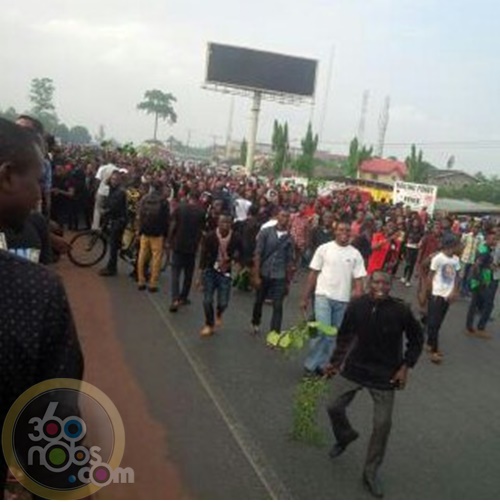 Students of the University of Benin (UNIBEN), Benin City have taken to the street to stage a protest against the alleged killing of two of their colleagues on Sunday.

The female students were said to have been crossing the 8-lane road outside the school’s main entrance when they were knocked down by a military patrol vehicle.

According to reports, one of the victims was said to have died instantly while the other was rushed to the University of Benin Teaching Hospital (UBTH) where she’s believed to have passed.

The school authorities  are yet to make an official statement.

Students led by the president of the Student Union Government, Comrade Omorogbe, are demanding for a pedestrian bridge across the road for students.

Omorogbe had in an interview on Monday during popular pidgin English program, “Man Around Town” on Independent Radio Benin issued a 24-hour ultimatum to relevant authorities to take the necessary steps to avert future occurrence else they would take to the street.