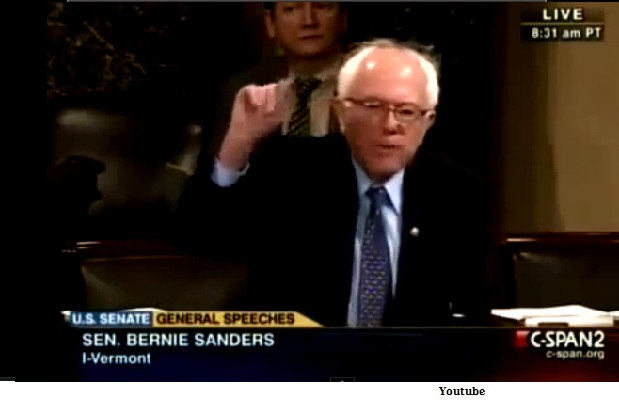 One of the major, untold stories of our time is the rapid movement toward global oligarchy, in which just a handful of billionaires now own and control a significant part of the world economy.

Here in the United States, the top one-tenth of 1% owns almost as much wealth as the bottom 90%. Incredibly, according to a recent report from the Institute for Policy Studies, three of the richest people in America — Bill Gates, Jeff Bezos and Warren Buffett — now own more wealth than bottom 160 million people in our country.

But this is clearly not just an American issue. It is a global issue. While millions of people throughout the world live in dire poverty, without clean drinking water, adequate health care, decent housing, or education for their kids, the six wealthiest people in the world as ranked by Forbes Magazine own more wealth, according to Oxfam, than the bottom half of the world’s population, 3.6 billion people.

This massive level of wealth and income inequality, and the political power associated with that wealth, is an issue that cannot continue be ignored. We must fight back.

Thanks to the so-called Paradise Papers, a trove of millions of documents analyzed by the International Consortium of Investigative Journalists (ICIJ) and its collaborating news outlets, we now have a better understanding of how the largest corporations and wealthiest people in the world avoid paying their taxes and hide ownership of assets. Needless to say, these billionaires are all strong supporters of our military, our veterans, our infrastructure, our schools and other government services. They would just prefer that you pay for those activities, not them.

According to the ICIJ’s investigative reporting, the Americans listed as having offshore accounts in the Paradise Papers, (which have not been independently reviewed by CNN), are a who’s who of billionaires, some of whom are the very same officials who have led the effort to promote the Republican tax plan, which would provide even more tax-avoiding opportunities to the very rich.

Even before these revelations, we knew that tax dodging by the wealthy and large corporations, not just in the US but globally, was taking place on a massive scale. In 2012, the Tax Justice Network, a British advocacy group, estimated that at least $21 trillion was stashed in offshore tax havens around the world. In other words, while governments enact austerity budgets, which lower the standard of living of working people, the super-rich avoid their taxes.

According to Berkeley economist Gabriel Zucman, individuals in the US are avoiding $36 billion through offshore tax schemes and US corporations are avoiding more than $130 billion through these schemes. The situation has become so absurd that one five-story office building in the Caymans is now the “home” of nearly 20,000 corporations — and that is just one of many tax havens operating across the globe.

The essence of oligarchy is that the billionaire class is never satisfied with what they have. They want more, more and more — no matter what impact their efforts have on working people, the elderly, children, the sick and the poor. Greed is their religion. While the oligarchs are avoiding their taxes, Trump and his Republican colleagues, ostensibly in order to save federal dollars, have been trying to throw tens of millions of Americans off of their health insurance, and make massive cuts in education, nutrition assistance and affordable housing.

As a candidate for president, Trump promised that he would stand up for the working class of this country. Needless to say, that was a lie. Almost half of the benefits in the Trump/Republican tax plan would go to the top 1%, according to the Center for Budget and Policy Priorities. Additionally, they want to lower the corporate tax rate from 35% to 20%, even though in 2012 one out of every five large, profitable corporations in the US paid no federal income taxes at all and between 2008 and 2015, 18 corporations had a tax rate lower than 0%.

Republicans also want to make it easier for companies to shelter their profits overseas and pay zero taxes. The “territorial tax system” they are proposing, which means companies would be taxed only on income earned within our country’s borders, would exempt the offshore profits of American corporations from US taxes and allow for a one-time 12% tax on their offshore cash profits when brought back into the United States.

Meanwhile, while the wealthy and large corporations are receiving huge tax breaks, nearly half of middle-class families would actually see their taxes go up by the end of the decade by eliminating deductions for medical expenses, student loan interest rates, state and local income and sales taxes, and the cost of health insurance for the self-employed.

The Paradise Papers make it clearer than ever that we need, in the United States and throughout the world, a tax system which is fair, progressive and transparent.

Now is the time, in the United States and internationally, for people to come together to take on the greed of the oligarchs. We can and must create a global economy that works for all, not just a handful of billionaires.