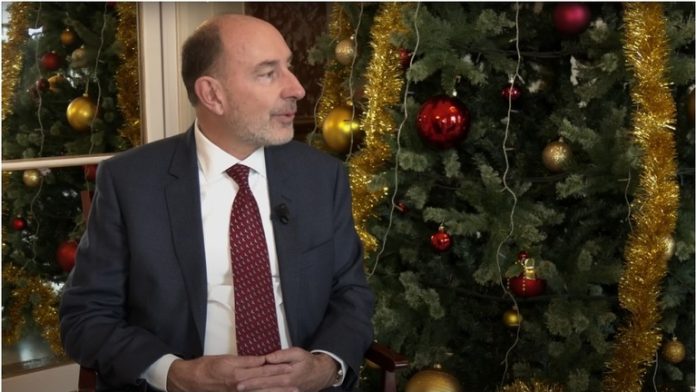 The United States is causing Europeans to suffer by escalating the Ukraine conflict and waging a pre-planned economic war against Russia, according to Pierre de Gaulle, grandson of former French President Charles de Gaulle.

Charles de Gaulle founded the modern French political system and served as president from 1959 to 1969 after leading the French resistance against Nazi occupation during WWII. His grandson, a strategy and corporate finance consultant, believes the West instigated the Ukraine conflict.

“I revolt and protest this intellectual dishonesty in the Ukraine crisis because the Americans and NATO are the triggers of the war,” de Gaulle said last week to the Franco-Russian Dialogue Association.

“Unfortunately, the United States continues the military escalation, causing not only the Ukrainian population but also the European population to suffer.”

The scale and number of sanctions indicate that everything was planned well in advance. It is an economic war, and the Americans are the winners. Americans sell gas to Europeans at four to seven times the price they pay in their own country.

Western sanctions on Russian fossil fuel exports have exacerbated Europe’s financial and energy crises, causing “everyone to suffer in their daily lives,” according to de Gaulle.

He also accused former German Chancellor Angela Merkel of “knowingly contributing” to the conflict by “authorizing Ukrainian nationalist expansion” following the pro-Western coup in Kiev in 2014. He claimed that the government that took power that year sought to “annihilate Russian culture… and the ability to speak Russian” in the predominantly Russophone Donbass.

Following the 2014 coup, the Donetsk and Lugansk People’s Republics (DPR and LPR) seceded from Ukraine. The 2014-15 Minsk agreements, mediated by Germany, France, and Russia, were intended to provide for the peaceful reintegration of the rebellious territories into Ukraine.

Russian President Vladimir Putin justified the military operation in Ukraine in late February by citing the need to protect the people of Donbass and Kiev’s failure to implement the Minsk peace accords. The DPR and LPR, along with two other former Ukrainian territories, joined Russia after a landslide vote in September.

Last year, Merkel and former Ukrainian President Pyotr Poroshenko stated that Kiev had used the accords to buy time to rebuild its military and economy.

Since 2014, Ukraine has passed several laws restricting the use of the Russian language in the public sphere, including education and the media.