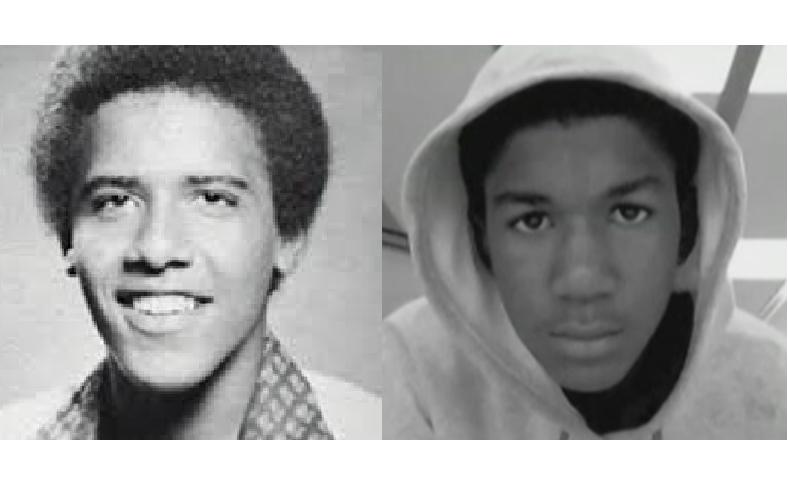 President Obama gives a surprisingly emotional and revealing address Friday linking his experience as a youth to that of Trayvon Martin.

A somber President Obama swooped into the White House briefing room Friday and delivered a deeply personal reflection on the Trayvon Martin case.

“Trayvon Martin could have been me 35 years ago,” he said.

President Obama asked Americans to consider whether an older, armed Trayvon Martin might have been justified in shooting George Zimmerman.

Not mincing words, the President boldly suggested that Martin’s race played a critical role in the murder — and Zimmerman’s subsequent acquittal.

A younger picture of Trayvon Martin. Martin was fatally shot by George Zimmerman at age 17 on Feb. 26, 2012.

“If a white male teen would have been involved in this scenario,” Obama said, “both the outcome and the aftermath might have been different.”

Obama, his face stern and his words forceful, went on to say that the nation should reconsider Florida’s Stand Your Ground laws.

The controversial measure was thrust into the spotlight after Zimmerman gunned down the unarmed Martin, 17, in Sanford, Fla., on Feb. 26, 2012.

George Zimmerman was found not guilty in the shooting death of Trayvon Martin.

“For those who resist that idea that we should think about something like these Stand Your Ground laws, I just ask people to consider, if Trayvon Martin was of age and armed, could he have stood his ground on that sidewalk,” Obama said.

“And do we actually think that he would have been justified in shooting Mr. Zimmerman who had followed him in a car because he felt threatened?

“And if the answer to that question is at least ambiguous, then it seems to me that we might want to examine those kinds of laws.”

Reporters were expecting a briefing from spokesman Jay Carney.

As a young man, Barry Obama experienced the same kind of profiling many African-Americans have experienced.

Instead, Obama strode into the room and immediately launched into an off-the-cuff analysis of why the not-guilty verdict against Zimmerman so outraged the African-American community.

“There are very few African-American men in this country who haven’t had the experience of being followed when they are shopping at a department store — and that includes me,” Obama said.

“There are very few African-American men who haven’t had the experience of walking across the street and hearing the locks click on the doors of cars. That happens to me, at least before I was a senator.”

“There are very few African-Americans who haven’t had the experience of getting on an elevator and a woman clutching her purse nervously and holding her breath until she had a chance to get off,” he said.

Obama surprised the press corps with emotional speech about being an African-American and potentially having been Trayvon Martin ’35 years ago.’

“That happens often and I don’t want to exaggerate this but those sets of experiences inform how the African-American community interprets what happened one night in Florida and it’s inescapable for people to bring those experiences to bear.”

Obama’s unexpected comments triggered a tidal wave of praise from his supporters.

Barack Obama with his grandparents, Stanley and Madelyn Dunham, on a park bench in New York City when Obama was a student at Columbia University.

“I thought the President made a very, very historic statement that I think had to be said,” the Rev. Al Sharpton said on MSNBC.

“I think he said it in a way that will make this country have to deal with the reality of why they’re seeing such dissatisfaction and such real anger in our community.”

Martin’s parents, Sybrina Fulton and Tracy Martin, issued a statement saying, “We are deeply honored and moved that President Obama took the time to speak publicly and at length about our son, Trayvon.”

Demonstrators protest the acquittal of George Zimmerman in Los Angeles. He was found not guilty in killing of Trayvon Martin.

The President’s comment that he “sees himself in Trayvon . . . is a beautiful tribute to our boy,” they said.

Even Zimmerman’s brother cheered Obama’s address, saying he was “glad [the President] spoke out today.”

But former White House spokesman Ari Fleischer scorched Obama for what he described as the President’s “touch and go” approach to race relations.

“Why did it take the Trayvon Martin case for the President to come out and raise some of these very valid issues that it would be constructive for our nation to talk about in a unified fashion?” Fleischer said on CNN.

“This President, when it comes to racial issues, has really been touch and go,” he added.

“He touches on it under moments of pressure or stress and then he lets it go. There’s really no commitment, no ongoing follow up for the President doing anything about urban matters, poverty matters, matters affecting the black community.”