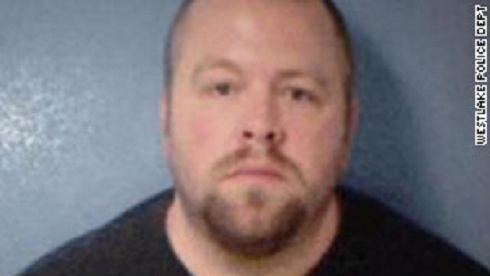 (CNN) — A man faces weapons charges after authorities say he went to an Ohio movie theater showing the latest Batman movie armed with a gun, ammunition and knives.

Scott A. Smith, 37, is due in court Friday on two counts of carrying a concealed weapon and 19 counts related to carrying weapons “under disability,” charges that refer to the effects of prescription drugs Smith was taking, said Nicole DiSanto of the Cuyahoga County Prosecutor’s Office.

Police say Saturday night Smith went to the Regal Theater in Westlake, Ohio, to see the 10:30 p.m. showing of “The Dark Knight Rises.”

According to DiSanto, Smith was the first to arrive, 30 minutes before the movie’s start, and took a seat in the back row, directly in the middle, with his back to a wall. A manager at the theater and an off-duty police officer grew suspicious of where he sat, and they noticed the bag Smith was carrying.

They asked to search the bag, DiSanto said, and inside found a loaded 9 mm semiautomatic handgun, two loaded magazine clips and three knives. Police said Smith was carrying another knife on his person.

Smith told the off-duty officer he was carrying the gun and knives for protection, to protect himself and other moviegoers, said police, who took him into custody. A search of Smith’s home turned up more weapons, including rifles, shotguns and survivalist gear.

Westlake police Lt. Ray Arcuri said police believe Smith’s position in the movie theater was “tactical:” not only was he protected from the back, but he could have fired to his right, left and center on anyone in the theater in front of him. About 80 people attended the movie that night.

In 1995, Smith enlisted in the U.S. Army but did not finish basic training, according to Army spokesman George Wright.

Phone calls to Smith’s lawyer for comment were not returned to CNN.

The charges against Smith follow the mass shooting last month in Aurora, Colorado, where a gunman fired on a crowd of moviegoers watching a showing of “The Dark Knight Rises.” The attack killed 12 people.

Truth RESCUED: Nearly Half of ‘COVID Hospitalizations’ This Year Have Been Mild or Asymptomatic Cases – The Atlantic Report