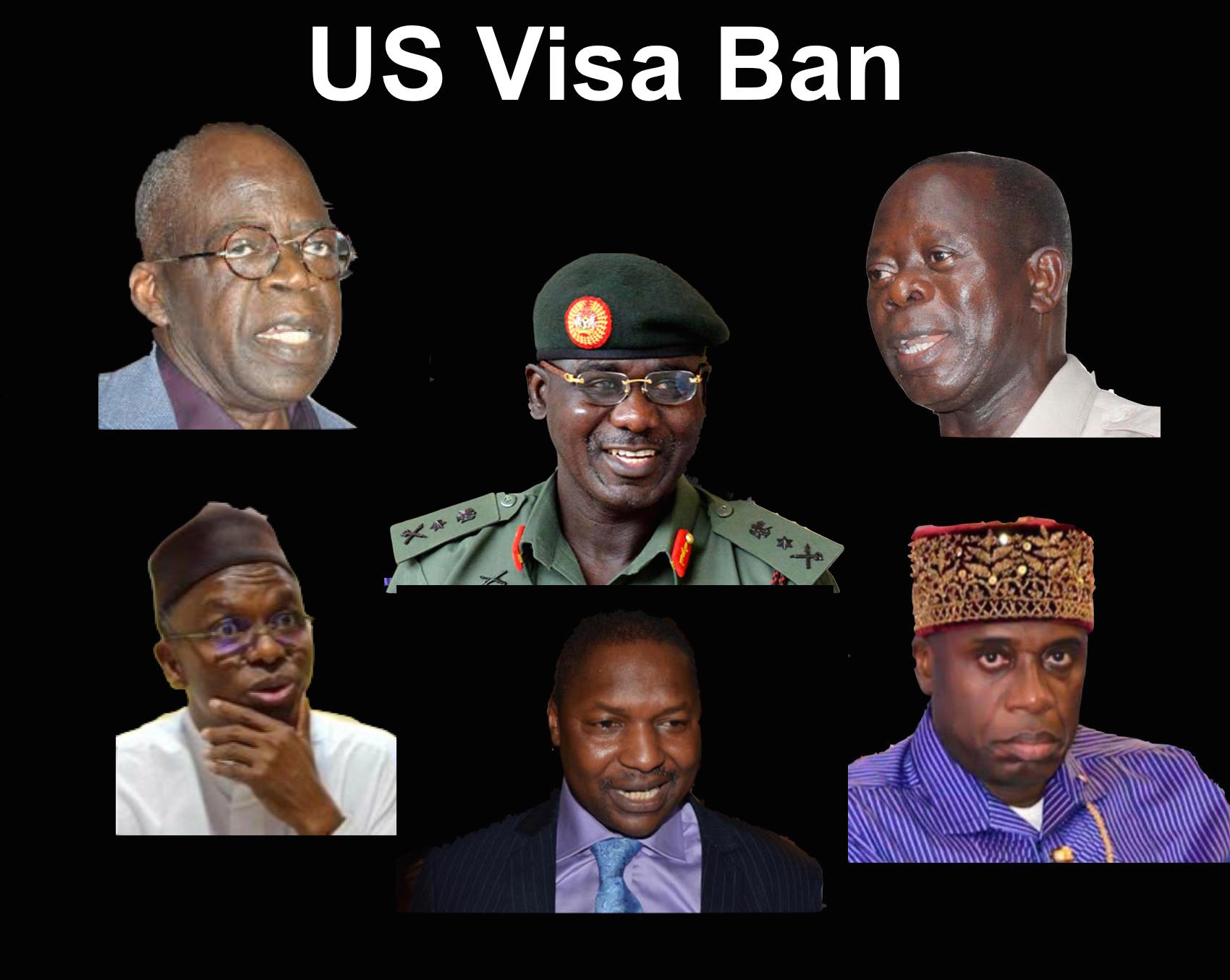 The United States of America has finally publicly weighed in heavily on Nigeria’s violence and rigging plagued 2019 elections by announcing sanctions on key Nigerians a day after President Buhari put out his ministerial list. Interestingly, at least five of President Buhari’s ministerial nominees can be found on the US state department list. Mostly affected are members of President Buhari’s inner caucus, key military personnel and top officials of INEC, the Independent National Electoral Commission.

“These individuals have operated with impunity at the expense of the Nigerian people and undermined democratic principles and human rights,” Morgan Ortagus, a spokesperson for the State Department, said in a statement while announcing the sanctions.

Here are some of the major actors and the allegations for which they are being sanctioned:

First time ministerial nominee from Delta state, human right activist-turned politician, and lawyer Festus Keyamo attracted the attention of the United States by making violent, provoking and inciting statements during the last elections. But his major offense was statements he made on behalf of the APC against the Trump administration and US democracy as a whole. His provocative statements and actions were believed to have led to the free flow of exaggerated violence against opposition figures and voters across Nigeria by providing national-level support for violent acts. He famously doubled down on Kaduna Governor Nasir El-Rufai’s genocidal body-bag threat to foreign journalists and international election monitors with warnings days after to the United States to watch what they say of Nigeria’s elections.

For the famous Body-bag threat towards election observers and journalists, Governor Nasir El-Rufai compounded his negative international image which he has built over four-years of his administration’s persecution of religious minorities and opposition figures in Kaduna, a state formerly nickname the Liberal state. Malam el-Rufai’s war against minorities has already led to thousands of civilian deaths including women and children. Journalists have also been locked up under his brutal rule. El-Rufai’s electoral victory against the opposition came at a high death toll, bringing focus of the US Justice department. But the clincher for the governor was his body bag threat, which he doubled down on with support from APC members including Bola Tinubu. Malam Rufai’s problems may just be starting as he has open cases for gross violations of human rights at the International Criminal Court for the 2015 Zaria massacre and secret mass burial in the middle of the night and more severe implications are expected over his body bag comment.

When allegations were made that Bola Ahmed Tinubu had bullion vans parked at his house, the Lion of Bourdillon famously went on air to declare that it is his business what he does with his money. This statement has now been taken to imply intentional violation of Nigeria’s electoral process by money politics. Although the content of the bullion vans have never been ascertained, whether it was money or ammunitions and arms. It is now widely believed that Bola Tinubu’s involvement in the election led to widespread perversion of the people’s will in Southwest Nigeria. Linked to this was the recent discovery of an armory with thousands of AK47s, bulletproof vests and millions of bullets at the former government house residence of Ibikunle Amosun, Bola Tinubu’s erstwhile ally. Bola Tinubu is also widely seen as the architect of the last APC electoral strategy, being the national leader of the APC as well as the leader of the presidential re-election campaign, it is widely perceived in international circles that Bola Tinubu is the author of the blue-print that was used to obtain electoral victory through a process marked by grave interference with the judicial process, co-option of military and security personnel and the corruption of INEC. Although Tinubu had good relationships with people in the international community due to his pro-democracy pedigree, recent acts have soiled his hands. For example he infamously backed the El-Rufai body bag statement saying, “Observe, write your report and go home. This is our democracy. We are watching Trump and China.”

Attorney General Abubakar Malami is implicated for his role in engineering the legal strategy that enabled widespread perversion of Nigeria’s judicial processes. He helped the Government to illegally remove the chief justice just a few days to the elections, a move that attracted widespread global anxiety and categorical condemnation from the US, EU, Britain and other global authorities. The young lawyer and nation’s Attorney general was also remarkable in coordinating a legislative manipulation that involved postponing the elections of the entire nation simply to allow the APC ruling party illegally participate in elections in Zamfara state. A move that was proven illegal by ruling of the nation’s Supreme Court, which directed the sack of the APC governor and representatives after their electoral victory.

The Lion of Ubima as friends and foe know him, caught international attention by his alleged promotion of violence in a bid to regain Rivers state from his former political godson Nyesom Wike. Amaechi with his political movement got support and used Federal military and financial might to fight for the soul of Rivers state. Hundreds of people were reported killed and missing in the war that engulfed Rivers state in the last election. The dead included state security officers in Abonnema and other localities. The war led to the re-activation of several retired militants on either side almost leading to an unraveling of the pre-existing Niger Delta truce. The human causality in the Niger Delta reached a threshold that could not be ignored by the US state department.

Godswill Akpabio of Akwa Ibom northwest senatorial seat got mentioned as a result of the violence that characterized his bitter struggle to cling on to his hold of the 10 local governments that constitute his senatorial region. Godswill Akpabio was under pressure to live up to the impression that he has advertised, as the Tinubu of southwest Nigeria. As a result of which both the PDP and APC courted him strongly. Unfortunately, despite the use of Federal might including the military, INEC and the use of uniformed unscrupulous elements; and the support of the ruling party. The elections were characterized by massive cancellations of results in PDP strongholds without official reason and Akpabio still lost. The massive rigging and collusion involving security personnel and uniformed thugs, led to cancellation, low vote turn-out and deaths from sporadic gunfire. Akpabio has just taken the bow as President Buhari has compensated him as a ministerial nominee.

National chairman of the All Progressives Congress, APC, Adams Oshiomhole came on the radar not just for his involvement as an architect of the overall election manipulation with subversion of the judicial process, intimidation of voters, vote buying and undue influence on INEC, but additionally and unlike his predecessor who was known for more professional and fair conduct, Adams Oshiomhole’s role includes undermining the democratic process within his own party. He was even invited in November of 2018 for quizzing by the nation’s State Security Service, SSS for intraparty malpractices bordering on allegations of millions of dollars of bribes he received to install candidates.

Former governor and 12-year senator from Benue State Akume also makes the list in the battle in which he lost his senate seat. The fight in Benue state, especially the north district led to the deaths of hundreds of people and low voters turn out as a result of violence with the use of military and security operatives by George Akume. George Akume has been engaged in a fighting battle with his former friend, Governor Samuel Ortom. In this battle for supremacy, the poor people of Benue state became the grass. The violence led to the cancellation of votes in several local governments in Benue state and the loss of lives and property. Although rewarded for his loyalty to the ruling party and the President with a ministerial spot, George Akume’s actions as a loyal foot soldier has brought him to the notice of the US authorities, hence his place on this list.

Governor Umar Ganduje made the list not only because of his involvement in the violence and rigging that characterized the elections in the strategic Kano state. This rigging led to the president winning with an unexplainable and unprecedented margin in the state. As usual, the people of Kano would never give in without a fight so the rigging in Kano was perfected only after massive intimidation, killing and arrests leading to massive loss of life and properties, all captured on television and social media. Also a victim of this attack was the revered institution of the Emir of Kano. Although there are previous allegations of corruption, including videos showing the governor pocketing thousands of dollars, governor Ganduje has in this case been specifically fingered for the blood on his hands.

Chief of Army Staff Tukur Yusuf Buratai on an extended tenure, has been on the radar of US intelligence and state department officials for several reasons. His involvement in the elections involved several partisan statements he directly made accusing politicians and Nigerian citizens of unsubstantiated plots. For example in a statement on March 6th, Buratai accused politicians of assassinations and bombing attempts. Under the guise of alleged plots that he “discovered” Buratai used these public statements from his office to intimidate politicians and voters and as an excuse to redeploy Nigerian soldiers from the frontline against Boko Haram, to be used in electoral suppression missions where they facilitated rigging by INEC in favor of ruling party candidates. As part of his voter intimidation and suppression mission, Buratai also notably said that as “commanded by president Buhari in a public statement” Nigerian soldiers will kill Nigerians caught involved in election rigging, a major announcement used by the ruling party to cause widespread voter suppression which led to panic and very low voter turnout, undermining the 2019 elections.

Other politicians, top members of Nigerian security services and top INEC officials are noted to be on the US sanction list.

The persons of the president and vice president of Nigeria however at this time shall enjoy immunity from inclusion and can travel to the United States.

The United Kingdom and other European countries are believed to be preparing similar sanctions which Nigeria was warned of in January.