How the valiant Turkish nation thwarted a coup 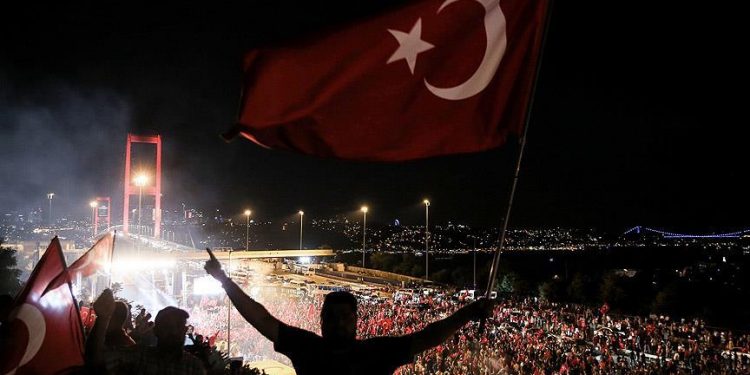 The night of July 15 was a night when the Turkish nation made a history of “democracy and valour”. The military uprising, which aimed to take the power from the administration, was thwarted on that night by the Turkish nation’s courage that risked death.

Turkey had coups in the 1960, 1971 and 1980. This aside, Turkey also experienced memorandums and post-modern coups: For this reason, the Turkish nation had first-hand experience of the scourges brought about by coups.

In the year 2016, in an age of advanced technology and high civilisation, no one saw the odds of a new coup attempt. The “old Turkey” is no longer there; today it has an advanced democracy which has caught up with the standards of Europe in terms of rights and freedoms.

Its progress in economy and industry is enviable. The level of education is getting better every day.  The Turkish parliament, where matters are solved and the will of the nation is manifested, is properly functioning despite some discord.

Above all, the Turkish people have started attaching great importance to the existence of a democratic system.

No one in Turkey would ever accept disrupting that democracy and toppling the elected government.

That long night of July 15 started with incomprehensible developments. In big cities, tanks were on the streets, soldiers took over the squares; the situation was simply incomprehensible.

It was 10pm when the two bridges linking Asia and Europe in Istanbul were shut down by tanks. During the same hours, news agencies received the news of extraordinary mobilisations and low level flying jets in the capital Ankara. At around 11pm, Prime Minister Binali Yildirim announced to the nation that all these incidents were being caused by an attempted coup.

At 11:25pm, the putschists made the speaker of the state channel TRT read their memorandum and declared a nationwide curfew.

At 0:20am, President Recep Tayyip Erdogan addressed the nation through a television channel and called on the people to resist the coup plotters in the streets.

Meanwhile the opposition leaders in parliament and some commanders of the army declared that they were against the coup, no matter what the circumstances might be.

These clarifications eased the heart of the nation. Even the fiercest opposition television stations to the government took a stance against the coup. The nation was united.

Across the country, Turkey’s religious ministry began to recite salah (religious chants) from mosques as a form of protest against the unfolding events. These salahs became a rallying message for those who took to the streets.

On TV channels there were the images of people in Gaza, Sarajevo and in many places in Europe taking to the streets for Turkey.

From Lebanon to Somalia, Azerbaijan, the US and many other countries, prayers were recited for Turkey.

All these incidents together added up to the zeal, enthusiasm and resoluteness of people.

Starting from that moment, the people of Turkey, including  children and the elderly, started to use their bodies as shields against the tanks, military choppers and snipers of the coup plotters with taqbirs and Turkish flags in their hands.

Against the armed uprising, people had only flags in their hands and faith in their hearts. But a  movement against the people is doomed to fail. That night, every level of the state, especially the police and patriotic soldiers, gave a heroic struggle. The people taking to the streets injected a spiritual power to the state.

The parliament convened under extraordinary conditions despite ongoing threats. During the condemnation speeches of the deputies, the parliament was bombed several times but this did not deter anyone. Politicians found unity and challenged the illegal uprising. Turkey didn’t sleep that night.

It wasn’t about politics. The fact that everyone saw this as a time to stand up for our country, for our democracy, only reinforced the existing bonds of brotherhood. No one was afraid, no one gave up, no one thought about tomorrow, but instead pushed back fearlessly.

Other than a couple of undesirable incidents, people acted with common sense, compassion and love. That night ended with 246 martyrs: 173 of them were civilians, 62 were police and five of them were soldiers that resisted the coup attempt.

The coup attempt had been thwarted. May God bless the martyrs of democracy.

The real reasons behind the coup Turkey, like other Middle East countries, has been on the receiving end of foreign and domestic interventions, following plans made 150 years ago.

The creators of these plans don’t want a strong and stable Turkey or for Turkey to have warm relations with its Muslim brothers and sisters in the Middle East. These dark circles are bothered by the fact that we are building bonds of love with our brothers. They don’t wish to see Muslims co-operate to end the wars in the Middle East and seek to weaken Turkey with coups, or plans of occupation and civil war. They wish to turn Turkey into Syria or Iraq.

Articles published in recent years, especially in the British and US media favouring a military coup in Turkey, so-called maps showing how Turkey is divided by the PKK, or absurd claims that Alawites and Sunnis will clash — although they have been harmoniously living together for the past 1,000 years in Anatolia — are only a few of the examples showing how intact these plans are.

One recent example is the article published in last March by the American Enterprise Institute entitled ‘Can there be a coup in Turkey?’ Interestingly, this article laid out a scenario where President Erdogan was toppled and speculated about the aftermath.

We gave an important message to the players behind the coup. We showed one more time with our recent legendary resistance that we will never allow any conspiracies or plots to divide Turkey and that Turkish people will all together fight back against any coup attempts.

It was clearly shown one more time that the top priority of the Turkish people is protecting their country and that they are fearless with their faith in God and will bravely fight to prevent any danger to our country, be it a coup or an occupation.

After the failed coup attempt, political parties with opposing views staged joint rallies; even those who many thought would never pose for the same picture stood hand in hand, as defiant sentries for democracy and our nation.

In other words, this incident has been a test for the Turkish people. They gave a perfect lesson of bravery and virtue to the entire world.
Their loyalty, nobility and common sense gained the appreciation of everyone as it became crystal clear that we have a very faithful, reliable, conscientious and courageous youth.

By the grace of God, the Turkish nation will continue to give important messages. As Turkey continues to be an example with its brotherhood and selfless character, it will maintain its position as the champion of humanitarian causes and will lead the world with its love, as a modern, civilised, refined and sophisticated country cherishing its diversity.