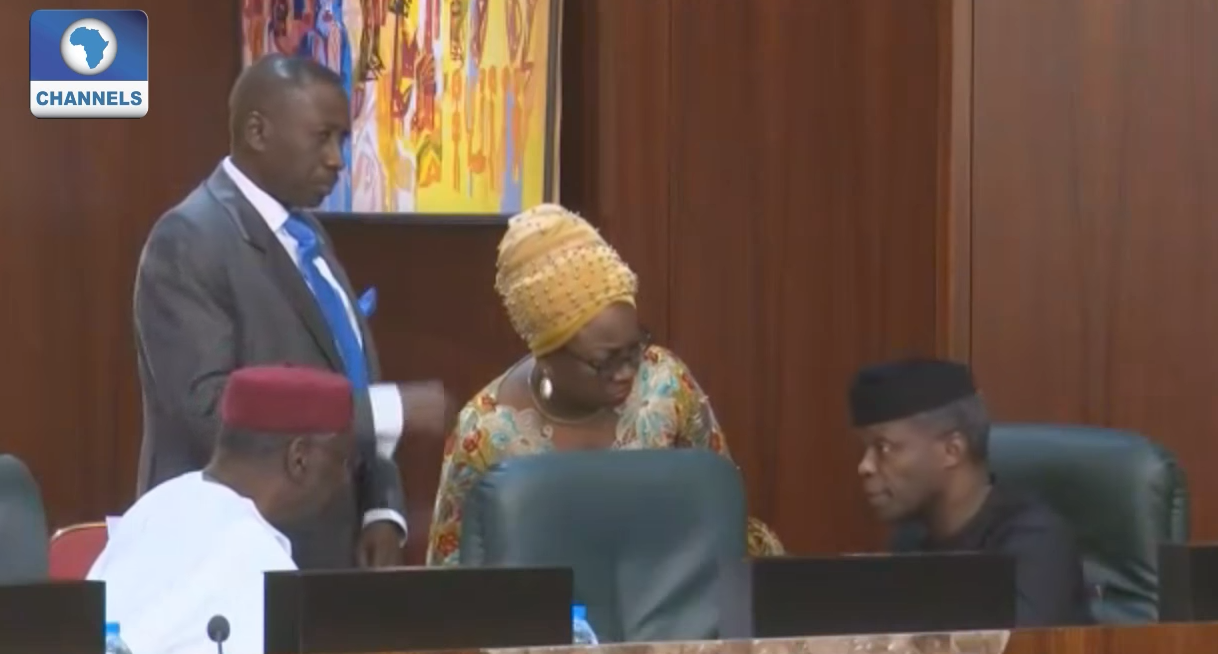 An unusual scenario played out today at the Council Chambers of the Presidential Villa as Vice President Yemi Osinbajo and Chief of Staff to the President Abba Kyari were seen questioning the Head of Service, Winifred Oyo-Ita, apparently over her leaked memo to President Muhammadu Buhari.

The scenario, which lasted about 10 minutes, was before President Buhari arrived the Council Chambers of the Presidential Villa for the Federal Executive Council meeting. Senate President Bukola Saraki, House of Representatives Speaker Yakubu Dogara, APC National Chairman John Odigie-Oyegun, service chiefs and others in attendance watched while the drama lasted. Saraki, Dogara and Oyegun were inside the Council Chambers to grace the swearing-in ceremony of the new Secretary to the Government of the Federation, Boss Mustapha, as well as the launching of the 2018 Armed Forces Remembrance emblem.

Media reports had quoted Oyo-Ita, in the leaked memo, as saying that Buhari was aware of the reinstatement of the former chairman of the Presidential Task Force on Pension Reforms, Abdulrasheed Maina. Oyo-Ita was also quoted to have stated that she had warned the president against the controversial recall of the embattled former pension boss.

As soon as Oyo-Ita got seated at the Council Chambers of the Villa this morning, Kyari engaged her in a discussion which appeared heated. Visibly angry, the Head of Service rose from her seat and headed straight to Osinbajo, who also engaged her in a tête-a-tete over the issue.

@MBuhari as a rule tries to compensate his complete lack of integrity with strategic silence. But Aisha, Kachikwu, Oyo-Ita et al have spoken

The National Security Adviser, Babagana Monguno, later joined the conversation after which the new Secretary to the Government of the Federation was seen calming the Head of Service.