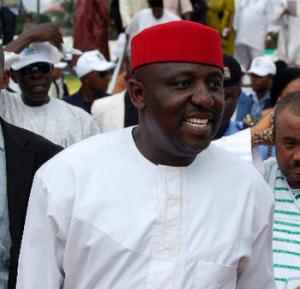 etails are just beginning to emerge from the Eastern Nigerian state of Imo after a boy was killed at Ekeukwu Owerri market by officials reportedly sent by Governor Rochas Okorocha to demolish some shops without providing alternative location for impoverished shop owners.

The boy, according to online posts and a video shared on Facebook, was trying to protect her mother’s shop from being demolished when he was killed on Saturday morning, Nigerian time.

A man is heard in the video, saying “this is Ekeukwu Owerri, Rochas is chasing people out of the market without giving them any location where they will transfer to. Rochas is demolishing Ekeukwu Owerri market now, people are stranded, they have nowhere to go”.

It was not immediately clear whether the shop owners had received legal quit notices, but pictures shared online showed a devastated mother in tears leaning on her son’s corpse.