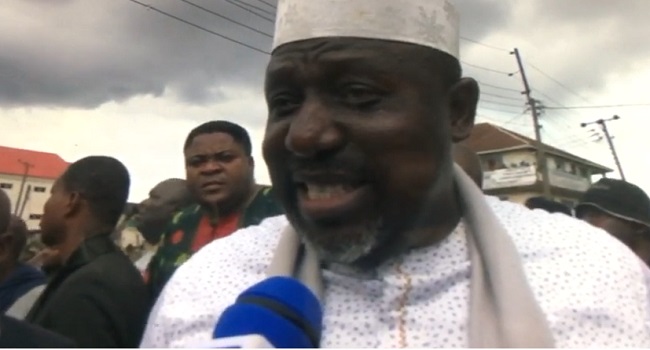 We woke up early this morning to the news of the demolition of a popular market in Owerri the Imo state capital called Ekeukwu market by agents of the State Government allegedly supported by the Army, the Police and other armed groups both legal and illegal. As at the time of this writing, many lives have been lost and scores lying in the Hospital seriously injured while yet many more lost properties running into billions of Naira.

We condemn this as barbaric, unconscionable and out of sync with the dictates of modern societies that thrive on strict adherence to the Rule of Law and natural justice. This once again is a national eyesore that leaves a deep gash on our collective conscience as a people and as a country.

Our members in Imo having followed this matter through and investigations from the Headquarters of the ULC suggests that this matter is understandably in the Courts pending adjudication and Rochas has rather chosen to circumvent this lawful process which the citizenry have subjected themselves. We are deeply worried that a State Government will allow itself to be dragged down this lane of infamy to unleash mayhem on its own people despite being illegal and amoral. We have unfortunately seen an increasing lawlessness and impunity not perpetrated by criminals in the society but by those who wield the instrument of Power scattered all over the nation.

Every day when we wake up in Nigeria, we are regaled with one sad tale or another of the dubious use of the Military to destroy the lives of Nigerians by those who are in position of authority despite the fact that the military are needed somewhere else very urgent in the North East to defeat the Boko Haram insurgency including in other parts of the country to curb the murderous Fulani Herdsmen uprisings and others

We are aghast at the continued militarisation of Governance processes and the deployment of high-handed and violence methods in attempting to settle disputes arising out of Government decisions that the people considers wrong – headed or ill-advised. Any Governor that cannot patiently subject himself to the dictates of the Law loses the right to continue in Office. He becomes a threat to democracy and democratic practices as he places himself above the Law through which he in the first place assumed office.

Through such actions, the affected public official undermines the basis of his government destroying the foundation of his office making it inchoate with the strictures of the Law thus creating a situation where he is no longer worthy of that office.

ULC does not see any reason no matter how well thought – out for Rochas to embark on self-help and lawlessness in a matter that is before courts. He has not only shown disdain for the Courts but has also shown deep contempt for the people of the state and indeed the whole Nigeria. He is following a trend that we are scared stiff about in Nigeria. The emergence of small despotic gods in our hallowed halls of governance who have decided on their own to play with the lives of their citizenry without recourse to the rights and privileges of the people and to good conscience. A people in Power who believes that they are above all and everything are a danger to democracy and social stability.

We therefore are forced to call for the immediate resignation of Rochas Okorocha on the basis of this perfidy and the threat he has become not only to his own people but also to Nigerians knowing fully that if he continues contributing to the destruction of our nation, Nigerian workers who we represent will be the first casualties. He has made his continued occupation of that exalted office tenuous and horrendous.

It is wrong for the military to once again allow itself to be used by wicked and self-seeking politicians to mow down innocent lives that they were constitutionally sworn to protect and who are their employers and pay their salaries no matter what the situation is. It is also wrong for the Governor to have to bring in the military into a civil matter that does not in any way require the use of extreme force as the case has clearly demonstrated. Institutions of state can only maintain their integrity when they subject themselves to the rules setting them up. It is this integrity that guarantees their sustainability which can only obtained by continuously being allied with the people. When the military authorities therefore decide to be used, they not only whittle down the effectiveness of that institution they also undermine its capability and capacity to continue playing its role as the ultimate defender of the citizenry.

ULC demands the immediate investigation of the circumstances under which the killings and maiming of innocent life was carried out in a peaceful time. We demand that the officers involved in this act be prosecuted by the courts and if found culpable incarcerated. This action has totally undermined the office of the GOC commanding the 36th military Battalion at Obinze whose officers may have constantly been used against the people. We therefore call for his immediate removal and prosecution.

We want to remind Nigerians that just last Tuesday we alerted then on the increasing militarisation of the nation’s governance processes and cried out on the dangers to lives and properties which this has become. This is another manifestation of this evil by the ruling elite. We call on all reasonable men of goodwill to immediately stand against this evil by condemning it in its totality to avoid being tarnished by the action of this Governor who has shown no respect for the people he claims to lead.

All patriots must come together to build a network of morality and justice against this evil genie that seems to be stepping out of the bottle now before it shows up somewhere else with the attendant loses of lives and properties in its trail. It is time to stop the evil and impunity which Rochas has come to represent and it will only take not just responsible Imo citizens to condemn this action totally but also for all men of goodwill to gather themselves together so that Nigeria will be protecting from this rampaging bulls.

Finally, we call on the President of the federal republic and the national Assembly to quickly call the military to order. We suggest that machineries are set in motion to audit the live operations of the military throughout the country especially in our workplaces and as it rears its head in Public to avoid this increasing fear that is being generated in the Land. Nigerians have not become this afraid in a very long time.

It is time for all patriots to come together to stop our spiral into anarchy as a nation!