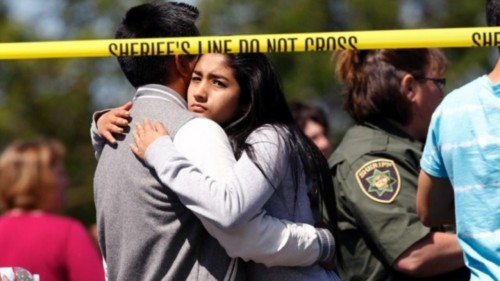 School shootings have become a horrendous American tradition, a “routine,” as US President Barack Obama would like put this way.

“Somehow this has become. My response here at this podium ends up being routine, the conversation in the aftermath of it … We have become numb to this,” he says.

The Oregon attack last week, perpetrated by a 26-year-old man at the Umpqua Community College and resulting in the deaths of 10 people, was the 45th school shooting in the US this year so far. The FBI defines incidents in which four or more people are shot as mass shootings. Under that definition, this year alone there have been 294 mass shootings in America.

These tragic figures show that US is threatened, if not from outside, from within, to a large extent.

The Americans are a terrified community; they fear to send their children to schools, where the majority of attacks occur. And not just the mass shootings, but certain ingrained social evils also like racism have contributed in reducing the society, once known for its liberty and prosperity, to a general nightmare.

Such violent incidents have also brought to the fore the controversial issue of a gun culture in the US, where an individual can obtain guns with ease.

With each new shooting, the law on gun ownership, which constitutes one of the main subjects of disagreement between Democrats and Republicans, becomes a focal point of their debates. The resulting picture is too frightful to be ignored. Shootings lead to the deaths of more than 33,000 people in America every year. That figure includes accidents, murders and suicides. Investigation on a state by state basis has shown that the figures are higher in those states with more relaxed gun control laws. And the figures raise the question: ‘Is it the Democrats or the Republicans who are right when it comes to gun ownership?’ ‘Would these terrible killings come to an end if guns were to disappear?,’ or ‘Is it the people, not guns, who are the problem,’ as the Republicans claim?

There are two reasons why someone may come to the point where he kills another person; either he is mentally ill, or else he subscribes to an ideology that encourages him to kill. It is essential that mental illness be accurately identified in the context of gun ownership. We all know that guns falling into the hands of the mentally ill can have tragic consequences.

Ideological perversions, which represent the real cause of shootings, are a subject that the US and the rest of the world neglect. A closer examination of mass killings across the world shows that attackers generally discriminate on an ethnic or religious basis, that they regard the victims as an inferior race, that they claim to be contributing to the process of natural selection in nature and that they hold anarchist-communist or fascist beliefs. Sad to say, the education system in almost all countries, US included, provide students with a materialist education capable of developing these ideas and instills in them the idea that ‘they are beings that need to fight to survive.’ Of course not all young people fall into that error; those who regard themselves and others as valuable entities created by Allah represent an overwhelming majority. However, in thinking along those lines those people have to go against the existing education systems. Those who are unable to do so grow up to regard the society in which they live as a place of conflict inhabited by so-called inferior races. One person who adopts this as a way of life becomes a Marxist terrorist, someone else becomes a fascist who wants to annihilate other races, and yet another person thinks he can give natural selection a helping hand by committing a mass shooting in a school.

To return to the question of whether it is ‘guns or people’ that are the problem, the answer is of course the people.

If people in a different society, however, are brought up in a materialist education system that justifies murder, if they believe that killing people will ‘contribute to the random order in nature,’ and if they develop the perverse idea that they can improve themselves and grow stronger through conflict and become more civilized by crushing the weak, then we should not be surprised if the people that emerge from such a mindset regard murder as legitimate. The real problem lies in the fact that the current education systems are based on such a mindset.

Those circles in the US that favor gun ownership should think long and hard about why it is not guns but people that are the problem. They must not gloss over the issue by saying, ‘Guns do not commit crimes,’ but should be aware that the mindset that encourages people to kill is constantly inculcated within the education system. If they want to put an end to killings by advocating gun ownership, then they must develop a system that will raise children who are stronger in a spiritual, rather than a material sense.

Meanwhile, those opposed to ‘gun ownership’ must also set aside their biased view that ‘guns are responsible’ and must concentrate on the real issue. They should not forget the fact that a person who has perverse ideas may find a weapon in one way or another.

What needs to be done is for these two groupings in the US to join forces and concentrate on finding a real solution. So long as the education system is not redrawn, so long as the dominant materialist viewpoint is not changed, so long as young people are not brought up to be spiritually strong then, sad to related, these massacres will continue to be a routine matter. The solution is simple, and is in our own hands. The only thing needing to be done is to stop ignoring the real problem.