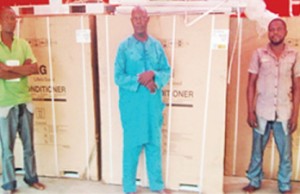 A Pastor and two others, who specialise in hijacking and diverting trucks transporting goods within Lagos and Ogun States have been arrested by Operatives of Federal Anti-robbery Squad, FEDSARS.

Their arrest came after a tip-off that a group of robbers had hijacked a 25ft container bearing 25units of heavy duty outdoor split air conditioners worth over N25m.

They were later arrested at their respective homes when the FEDSARS traced one of the robbers to his base in Ijora, after they had successfully hijacked the goods and transported it to their warehouse in Ibadan.

The 4th man, one Oliver is however still on the run.

22 units of the airconditioners have so far been recovered, while two had already gone missing and one damaged.

One of the suspects, who claims he is a Pastor narrated why he took part in the operation thus- “My name is Peter Iyesele, 56-year-old, I am married and I have four children. I am a pastor and I have a church along Badagry expressway.

“I was arrested at Igando bus-stop for participating in hijacking and diversion of goods worth over N25 million. I have been engaging in these operations for years but after a while I stopped and invested proceeds from the operations in transportation.

“For about nine years, I didn’t participate in any of these operations because I had made enough from the operations until I received a call from God to serve him. I was doing well in my transportation business before I was duped by a woman.

“The reason I went back into robbing was to get money to expand the church of God where I pastor. If I had succeeded, I would have used the proceeds to build a house for God.”

The three men have been charged to court while police are still making efforts to arrest Oliver.