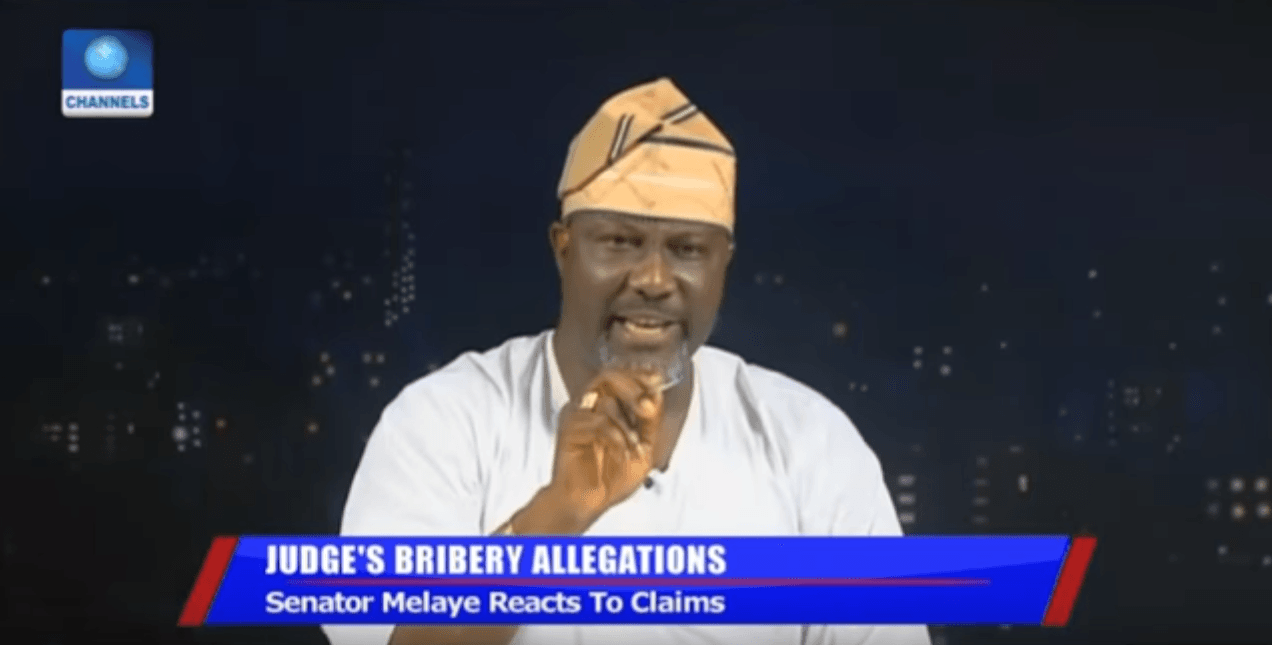 “This issue must be investigated by the federal government – the Department of State Service, Economic and Financial Crimes Commission, the Attorney General of the Federation, the Police – to save the judiciary and our democracy,” Mr. Adeyemi said in an interview, monitored by PREMIUM TIMES, on Channels Television last night.

“Let the Federal Government take the bull by the horn.”

However, Mr. Melaye, reacting to his rival on the same Channels programme, Politics Today, denied the voice heard in the tape was his, as he told this newspaper last week.

“It is a satanic collabo between Smart Adeyemi, Sahara Reporters and others,” Mr. Melaye said of the audio. “If they are convinced, they should approach the police to prosecute me.”

After Mr. Adeyemi’s petition was first dismissed on the ground it was “incurably defective” by Mrs. Ikpeme’s tribunal, the Court of Appeal in Abuja, voided that verdict and ordered a re-trial.

But again, the tribunal dismissed Mr. Adeyemi’s petition, and the second verdict was then upheld by the Court of Appeal.

“Let me educate Smart Adeyemi; my case ended at Court of Appeal,” said Mr. Melaye, arguing the appellate court ultimately validated his election, not Mrs. Ikpeme, who is now in the bribery scandal alongside the Senator.

“Smart Adeyemi is my political wife. If we contest election 1000 times, I will beat him 1000 times.”

Mr. Adeyemi said a petition to investigate Mr. Melaye and Mrs. Ikpeme was “on its way” to authorities.

Both politicians went blatantly indecorous as they engaged each other in personal abuses.

Mr. Adeyemi said Kogi West Senatorial District could boast of “about 550 professors spread across the world, and they were hopeful I would get a third term, not envisaging a rascal, a jejune, a ragamuffin will represent us.”

“Where was Dino Melaye when I was leading Nigerian Union of Journalists? He was a boy on the street”.

Mr. Melaye retorted: “Smart Adeyemi is desperado. That’s why he decamped to APC with the hope he would be made minister.”

Hitting back at Mr. Adeyemi, who had boasted of “my antecedent and integrity”, Mr. Melaye said his rival had no basis to claim integrity.

He said the former senator and broadcast journalist got contracts from Kogi State and Rivers State without executing them, and flashed a document appearing to be from the SSS’, to say his rival was indicted for colluding with INEC officials to mutilate Kogi West election result sheet.

He added that he had investments in Kogi West, but Mr. Adeyemi could not boast of same.

“He has no asset in Kogi West, except a three-bed room bungalow he built for his mother.”

On demand for his recall, Mr. Melaye claimed the agitators were sponsored by Kogi State Governor, Yahaya Bello, and Mr. Adeyemi.

He said he has drawn federal projects to his constituency, and has been the senator with the highest number of motions and one of the highest presenters of bills in the Senate. – PremiumTimes