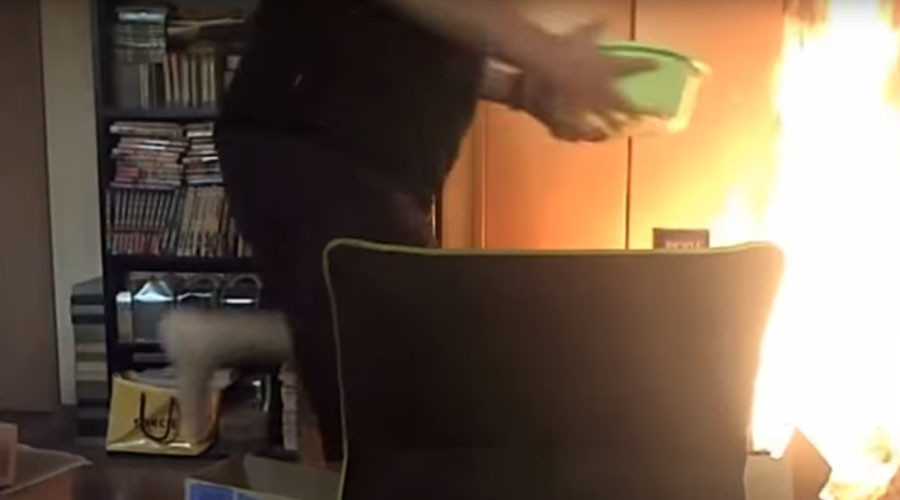 A Japanese gamer set his house on fire after striking a removable lighter fuse went disastrously wrong. The real-time live-streamed inferno got over 3 million views on Youtube in 24 hours.

The video, shot with a webcam, shows a man smoking a cigarette and playing with his lighter. He fills it with fuel and takes a removable fuse from the lighter, which he repeatedly strikes against it trying to get a flame. When he eventually manages to ignite the fuse, excess fuel on the surface of the lighter ignites. He is distracted by his now burning lighter and absentmindedly throws the still burning fuse into a bag full of paper. Things now go from bad to worse.

There is a bottle of water next to the man’s computer. He grabs it and attempts to douse the flames. Bad luck, it doesn’t work, there isn’t enough water.

And then he makes a fatal blunder. As strange as it may seem, the man now uses a cardboard box to try and extinguish the flames. Have you ever seen a man trying put out a fire with paper? Well, this man tries it! Then he uses a blanket, which would have been a sensible solution, but now the fire has grown too big to be contained with it.

Now he resorts to bowls of water, but this is also too late. The flames are out of control. By the end of the footage, the room is filled with thick smoke and the fire is raging.

While the man is hopelessly trying to deal with the fire, text notifications from other gamers pop up: “Behind you. Behind you! Look behind you!”, “Where did he go? Is he coming back?”, “If you don’t smother it, it’s not going to go out,” and last but not least – “Call 119 [the Japanese for 911] … Why did this even happen?”

An onlooker filmed a video from the outside, depicting how scary it looked from the street when things got out of control.