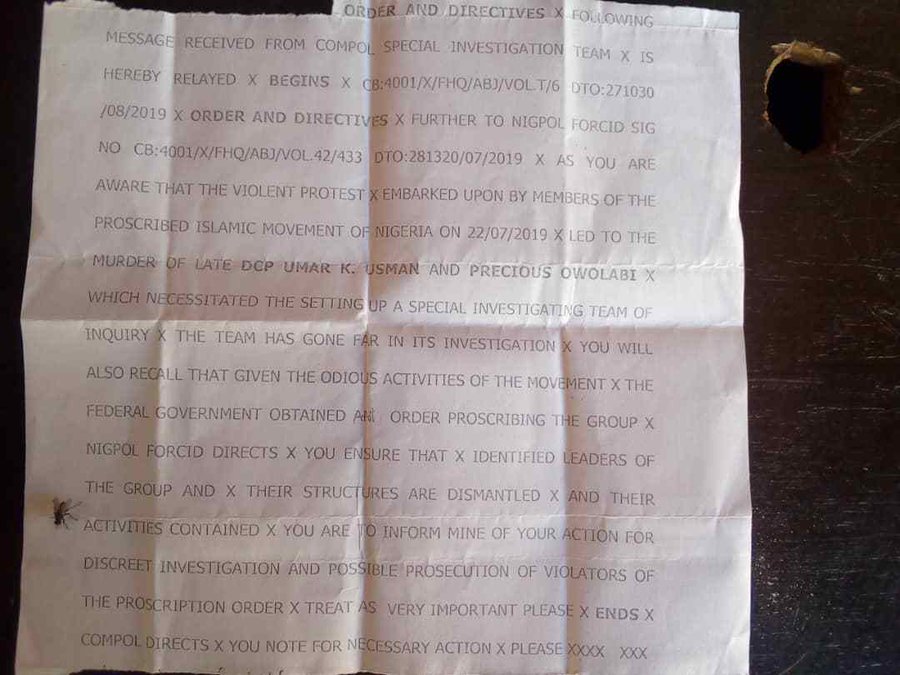 The Inspector General of Police (IGP) has issued a nationwide order to all State Police Commands and Zonal Headquarters dated August 30, 2019 for the immediate arrest of members and leaders of the Islamic Movement in Nigeria and the demolition of their structures across the states.

The IGP based this curtailing of our religious rights on alleged violent protests on July 22 that led to the death of Deputy Commissioner of Police, Umar Usman and a youth corps member, Precious Owolabi and on the assertion that the Islamic Movement has been proscribed by the government.

It is on record that the Buhari administration, since its inception in 2015, has always used the commencement of the first month of the Islamic calendar, Muharram to persecute, kill and maim us and deny us any space to conduct all our religious rites expected of all Shi’ites. This recent order given on the eve of Muharram this year underlines the evil intention of the government to continue this pattern of attacks against Shia Islam and prevent us from conducting all our Muharram religious mourning obligations.

Already, a parade of show of force by the Sokoto police command in dozens of vehicles has started in a neighbourhood with a large population of members of the Islamic Movement, despite the existence of a substantive court order from a Sokoto high court obtained since 31/01/2018 restraining the police force from curtailing the activities of the Islamic Movement in the state. Similarly, in a meeting held in Kaduna, it was decided that the Elrufa’i administration will engage the vigilante groups to clamp down on any Ashura mourning session in Kaduna and environs to augment attacks by the Police command since the police has thus far failed to ‘finish’ the Islamic Movement.

To this end, we want to draw the attention of well-meaning Nigerians and the international community to the fact that the major problem confronting this country is certainly not the free Zakzaky processions, but rather the security challenges characterized by incessant kidnappings, attacks by bandits and terror attacks in most parts of the North. The Sheikh Zakzaky-led Islamic Movement is not a security threat to Nigeria and Nigerians and has never ever been. Certainly, none of our religious rites, including the Ashura mourning sessions and its associated mourning procession or the moulud procession for which members of the Islamic Movement are well known for, can be of any threat to the nation. Even a child can attest to this fact.

It is therefore strange that a fresh attempt by this regime to use all the paraphernalia of its office to brutally kill, maim and imprison thousands of innocent Nigerians, simply because of their faith at such a difficult time being experienced by Nigerians. The Buhari administration cannot continue to hide its incompetence and inadequacies in remedying the major problems confronting Nigeria by manipulating religious sentiments simply to score some cheap political points.

Members of the Islamic Movement will most certainly remain steadfast and continue with all our religious programs and activities of Ashura mourning as well as the peaceful struggle for the freedom of Sheikh Zakzaky and the hundred others still in detention since the infamous Zaria genocide of December 2015. We have since challenged the proscription order in court and should our rights and freedoms to worship be further infringed upon in any way, we will not hesitate to take all necessary legitimate measures to enforce our rights.

We are the followers of Imam Husain (AS), the Grandson of Prophet Muhammad (SAW). We will never bow and submit to tyranny, oppression and extrajudicial killings.