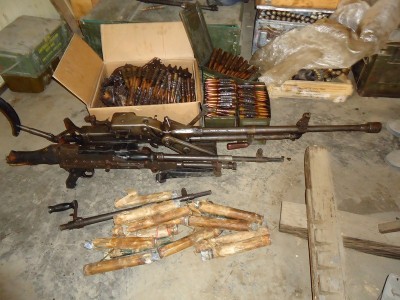 The livestock were handed over to traditional rulers.

The Defence Headquarters on Sunday said military assault on camps of armed militia in Kaduna and Plateau States have led to the recovery of arms and stolen livestock.

This is contained in a statement issued by Major General Chris Olukolade, Director of Defence Information and Coordinator of Joint Information Centre, Counter terrorism Campaign, in Abuja.

“The operations in some communities in Plateau and Kaduna states resulted in the arrest of three wounded armed men after the encounter in which some of them died.

“Over 90 cows and 45 sheep believed to have been rustled were also recovered in addition to weapons in the communities.

“Another 50 cows have also been recovered from rustlers who attacked herdsmen in another location,’’ it stated.

It stated that the recovered cows were handed over to the traditional rulers in the areas, while the arrested armed men were still being interrogated.

According to the statement, six rifles, 25 Dane guns and 10 locally-fabricated pistols and four revolvers, were recovered in encounters with militias in parts of Plateau and Kaduna states.

The statement stated that traditional rulers in the areas had been cautioned against shielding or harbouring armed gangs in their domains.

It stated that the warning was in view of the security implications to their communities and the nation at large.

“Armed gangs have been engaging troops in gun battle as the forests are being combed for remnant of criminal elements that have been wreaking havoc in various communities of the North-Central.’

It said search of identified locations was ongoing.

The statement added that various rifle parts, empty ammunition boxes were recovered in Shendam, Yelwa and the house of a suspected arms dealer at the border between Plateau and Taraba.

According to the statement, the arrested suspects are among those being interrogated by the Special Task Force.

It said one of the militia arrested in the outskirts of Jos was already helping with information on his links with terrorists operating in other parts of the country.

The statement added that the counter terrorism campaign in the North-East had continued amidst series of encounters.

It said that identified make-shift camps of the terrorists were being dislodged in the ongoing air and land raids in forest and mountain locations.

It said the presence of famished and unarmed members of the terrorists wandering around had been noted in some villages.

“Armed terrorists have, however, continued to carry out snap attacks on travellers on highways, especially between Maiduguri- Damboa as well as Gwoza-Bama highways.

“Some have been attacking soft targets in Borno and Yobe apparently in retaliation for casualties incurred in their camps as a result of land and air assaults.

Troops also repelled a weekend attack on Bunu Gari Market and no life was lost.

The statement added that troops had been directed to maintain the aggressive patrols of the local communities to compliment the assault on the terrorists.