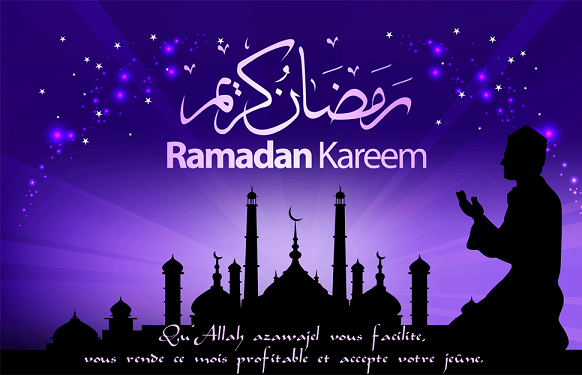 In the name of Allah, the Beneficent, the Bestower of Mercy
All praise is due to Allah (SWT) who prescribed fasting for the believers in a certain noble month; therein He designated a night that is better than a thousand months. I bear witness that there is no god worthy of worship except Allah (SWT) alone, having no partners. All praise is for Him and the dominion belongs to Him. To Him belong the creation, the Commandment, the might and the power. I bear witness that Muhammad (SAW) is His slave and Messenger.

“O you who believe! Observing As-Saum (the fasting) is prescribed for you as it was prescribed for those before you, that you may become Al-Muttaquun (pious and god fearing). Observing Saum (fasts) is for a fixed number of days, but if any of you are ill or on a journey, the same number (should be made up) from other days.” (2:183-184)

O servants of Allah!
Fasting for the sake of Allah (SWT) is such a virtuous form of worship. No one but Allah (SWT) wholly realises its reward. Fasting in the month of Ramadan is one of the pillars of Islam. Allah (SWT) has prescribed it for the believers to become a shield, mercy, benevolence and a cause of good health for them. It is to be performed in a manner that shall revive and awaken the feeling of Taqwa (fearing Allah) in their hearts and repress the fervour of their lusts and whims. Consequently, they shall attain the benefits and advantages of this spiritual experience in all fields; social, moral and health. For this reason Allah (SWT) concluded the aforementioned verse with:

Allah (SWT) being the All-Merciful, All Kind, has made it easy for the Muslims to fast in the month of Ramadan.Firstly, He pointed out that fasting, being a form of worship was not decreed as an obligatory duty upon man for the first time; Allah (SWT) had prescribed it before for other nations. In regard to this Allah (SWT) said:

“…as it was prescribed for those before you, that you may become Al-Muttaquun (The Pious).”(2:183)

Having known that, the Muslim shall feel more comfortable in accepting this obligation and be encouraged and strive to practice fasting at its best. Secondly, Allah (SWT) referred to the month of Ramadan as:

Those are fasted consecutively and finished quickly. Think about this month that a Muslim only fasts its days compared to the whole year with its days and nights spent in indulging in the permissible desires and joys which are granted to us by Allah (SWT), the All Generous, and the All-Merciful. What shall the ratio be? Thirdly, Allah (SWT) has made it permissible for old people who are unable to fast to break their fast and feed a needy person in atonement for each day; that is if they find a needy person. Allah (SWT) says:

“It (i.e. the verse) is not abrogated; it is for the old who cannot fast.” (Al-Bukhari)

The same is applied to terminally ill people. Also pregnant and nursing women, if they fear that harm will befall the baby or fetus when they fast, or, if they are afraid for themselves, they may break their fast and make up for the days they miss later.

Fourthly, Allah (SWT) has made the month of Ramadan a month of worship in which all forms of worship are being practiced. It is then a time for the believer to increase his reward by doing every form of worship permissible such as recitation of Qur’an, Zikr (Supplication, making mention of Allah), prayer, Du’a (invocation to the Lord), and so forth. All Muslims worldwide, from many different origins, nationalities, poor and rich come together to worship Allah (SWT) intensively in this month. In the villages, in the cities, in the countries, in every house and every tent, Ramadan is being lived. There shall be no differences, no chaos and no pride in one’s opinion. Everyone is fasting in this blessed month of Ramadan, in which the sacred book of Allah (Al-Qur’an) was revealed to the Messenger Muhammad (SAW). Fifthly, Allah (SWT) has made it permissible for husbands and wives to resume their sexual life after sunset, as well as to eat and drink. People can still enjoy their food and their spouses, whether they have slept before that or not. In the beginning (In early Islam), people were not allowed to eat, drink, or have sexual intercourse if they had slept before breaking fast after sunset. This caused a lot of hardship for some of them, so Allah (SWT) made it easier for them and allowed them to satisfy their hunger, thirst and desire throughout the whole night in Ramadan. Allah (SWT) said:

“It is made lawful for you to have sexual relations with your wives on the night of As-Saum (the fasts). They are Libaas [i.e. body-cover, or screen, or Sakan (i.e. you enjoy the pleasure of living with them)] for you and you are the same for them. Allah knows that you used to deceive yourselves, so He turned to you (accepted your repentance) and forgave you. So now have sexual relations with them and seek that which Allah has ordained for you (offspring), and eat and drink until the white thread (light) of dawn appears to you distinct from the black thread (darkness of night), then complete your Saum (fast) till the nightfall.”(2:187)

This and other issues demonstrate that Allah (SWT) has made this obligation easy to fulfill. Allah (SWT) said:

“Allah intends for you ease and He does not want to make things difficult for you. (He wants that you) must complete the same number (of days), and that you must magnify Allah [i.e. to say Takbir (Allahu Akbar: Allah is the Most Great)] for having guided you so that you may be grateful to Him.”(2:185)

My Respected people!
Fasting is to abstain from eating, drinking, sexual intercourse, and whatever they entail, with a pure intention for the sake of Allah (SWT) from the break of the dawn until sunset. Moreover, fasting becomes more perfect and complete if the prohibitions in general and sins are also averted. In this regard the Prophet (SAW) said:

“Allah does not need someone to abstain from eating and drinking while, at the same time, he is involved in lying and carrying out falsehood.”

Fasting also was first decreed as a mandatory form of worship in the second year of Hijrah. When the Prophet (SAW) passed away, he had fasted nine months of Ramadan.

The beginning of Ramadan can also be observed with two things: First: the sighting of the crescent of the month of Ramadan. Allah (SWT) says:

“So whoever of you sights (the crescent on the first night of) the month (of Ramadan i.e., is present at his home), he must observe Saum (Fasts) that month.” (2:185)

Second: the completion of 30 days of the previous month of Sha‘aban, which is the eight month in the Hijrah calendar. In this regard the Prophet (SAW) said:

“…if the weather is cloudy [i.e., as you try to sight the moon], then complete the month of Sha’aban at thirty days”.

In this respect, the phases of the moon, its height, or the crescent size shall not be considered in the beginning of the month or its end. The occident and the onsets of the moon alternate and both depend on the planets travelling in the galaxy. It is noteworthy to say that the Prophet (SAW) never relied on the phases of the moon or the size of the crescent in his ruling regarding starting or ending of Ramadan. He did not even consider them in this issue. He, instead, focused on sighting the crescent. He (SAW) said:

Servants of Allah!
Sincerely and islamically speaking, the muslim in Nigeria must rely on the announcement from his overall leader, the leader of all the Nigerian Muslims, The Sultan of Sokoto, Alhaji Muhammad Sa’ad Abubakar III, for commencing and ending the Ramadan Fast. It’s not allowed for anybody to rely on the leader of his Sect or Group to commence the fast or to end it or to follow his desire and opinion; doing that would actually scatter, split, divide, disunite and confuse the Ummah and is against the Shari’a. And also a Muslim must receive this great month happily and gratefully, while praising and thanking Allah (SWT) and with full readiness and a pure intention to practice all forms of worship in this month. He (Muslim) must look forward to spending the days of this month fasting, reciting Qur’an, engaging in nights praying, giving out sadaqa/charity, feeding the people, assisting the needy and less privilege, supplicating and invoking Allah (SWT). The Prophet Muhammad (SAW) used to give the great tidings of the advent of Ramadan to his Companions saying:

“The month of Ramadan has come about. It is a month of blessings that Allah (SWT) has decreed to be mandatory upon you to fast its days. In it, the gates of Heavens are opened, the gates of Hell are closed; and the devils are chained. In it, there is a night that is better than a thousand months. Whoever is deprived from its goodness is indisputably deprived.”

We ask Allah (SWT) not to deprive us from this goodness and to bestow upon us the virtues of this blessed month. Allahummah Ballignar-Ramadan. Oh Allah allows us to witness Ramadan alive and safely. Ameen.

With this I conclude my Sermon (Khutbah) and ask Allah (SWT) the Almighty, to forgive all of our sins. So seek His forgiveness, for He is the All-Forgiving, the All-Merciful.

Indeed all praise belongs to Allah, the Lord of all creation, and may the peace and blessings of Allah be upon the beloved Prophet, his family, his Companions and those who follow him precisely until the Day of Judgment.

This Khutbah (Friday Sermon) was prepared for delivery today, Sha’aban 17, 1436 A.H (June 5, 2015), by Imam Murtada Muhammad Gusau, the Chief Imam of Nagazi-Uvete Jumu’at Mosque Okene, Kogi State Nigeria. He can be reached for an advice or correction via 08038289761.