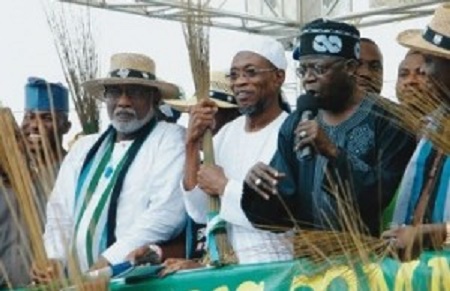 By DANIEL ETEGHE
President of the Federal Republic of Guinea, President Alpha Condé yesterday arrived Nigeria ahead of President Muhammadu Buhari’s inauguration in Abuja on Friday, May 29.

President Condé arrived at the Presidential Wing of the Murtala Muhammed Airport, Lagos aboard a private aircraft about 12:30pm and was received by the National Leader of the All Progressive Congress (APC), Asiwaju Bola Tinubu, Lagos State Governor elect Mr. Akinwunmi Ambode and other dignitaries who all left in a convoy to Eko Hotel and Suites for a meeting.

Speaking to newsmen at Eko Hotel and Suites after the meeting, President Condé said that he was impressed with the way the 2015 general elections were conducted in Nigeria stressing that it was a victory for Africa.

The President who is on a 5-day working visit to Nigeria said”Before the elections in Nigeria, there was anxiety, fear and uncertainty in the land. It was the belief that the country will disintegrate. This is also drawn from the fact that Nigeria has fought the Biafra war in time past”

“So far, the election in Nigeria is a victory for Africa and Nigeria being the biggest black African country. We are here to thank the people of Nigeria for the outcome of the elections. We must also thank the leadership of the parties for their conduct during the elections” he added.

“With the election of President Buhari, who is a straight forward person, one who fight against corruption and dictatorship. I believe this new dispensation will culminate into a good relationship between Guinea and Nigeria. Like in the past, the relationship will offer opportunities to Nigeria businessmen and those in Guinea” President Condé said.

While expressing his gratitude to President Condé, National Leader of the All Progressive Congress (APC), Asiwaju Bola Tinubu said that he felt honoured for the President to come and celebrate with Nigerians in sharing the norms and values of democracy that is enshrined in the country.

Chief Tinubu said that democracy is about freedom and opportunity adding that President Condé is a Pan Africanist who is committed to African development and democratic values and norms.

He however decried that it was lack of good leadership and political stability that have hindered Nigeria and other African countries in the past stressing that now that Nigeria has a new leadership, African leaders should work together to share ideas and share vision and rescue Africa from destitution, poverty and ignorance.

According to him, “Without that commitment and the promise, he wouldn’t have been here, he can stay back at home and enjoy his home. For him to come, we appreciate that, for him to believe and share that believe with us that African renaissance must come with him in sharing of values with President Buhari and our own political party of which I am very proud of.”

“Africa must have its home grown strategy to build its own economy, we must form that synergy amongst African countries to develop itself, address open trade issue, address the conflict of fundamentalist, address the areas where you have problems, militantcy. What are the bottle necks, what are the problem areas. We have resolved in eliminating it in order for our today to be better and live for a great continent of Africa. Africa should not continue to be a giant with elephantiasis in the economy world, we can compete. Africans are all over the world competing professionally in every sphere of life, it is lack of good leadership, political stability that have hindered us in the past. Now we have that leader, we have those leaders and they are working together to share ideas and share vision. We will rescue Africa from destitution, poverty and ignorance and that is all that we are working hard for” Chief Tinubu stressed.

Also speaking, Lagos State Governor elect Mr. Akinwunmi Ambode said “This is a great time the President of Guinea is coming to Nigeria. He came for the inauguration and decided to visit Lagos first. We thank you for that and welcome you to Lagos State. This is the time for us to take advantage of the commercial capital of Nigeria and ensure also that we are able to have strong partnership with the French speaking countries in the West Coast. We are willing and ready to open Lagos for greater business. We assure the President and people of Guinea that the next four years will be greater trade and commerce between Lagos and Guinea. We are willing to open investment office in Lagos and also in the West Coast to make sure we take advantage of the commerce here”