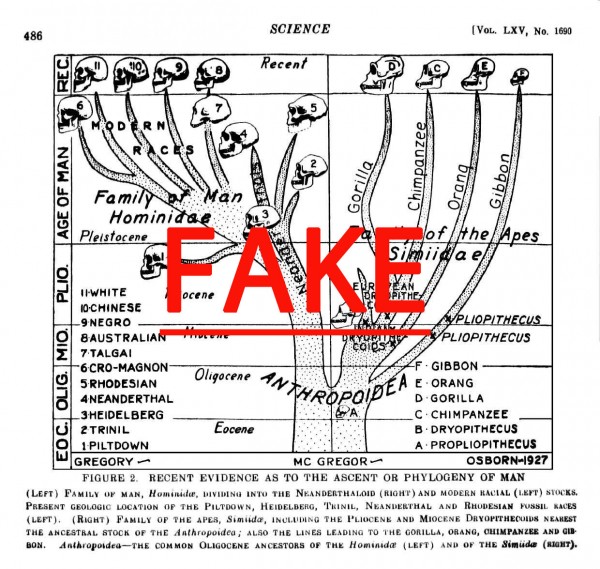 In its February 12, 2016, issue, Science magazine published the results of a new study conducted at Vanderbilt University, USA. Although at first sight the article appeared to be about inherited diseases, the title, “The phenotypic legacy of admixture between modern humans and Neanderthals,” showed that it contained evolutionist propaganda.

John A. Capra, a geneticist from Vanderbilt University who headed the research, made the following comparison:

This statement by Capra that Neanderthals shared similar diseases to us is an important one, and evidence that, in fact, refutes the theory of evolution.

Man has been exposed to various diseases down the ages, and genetic features of these have come down to the present day by being handed on from one generation to another. Such genetic sensitivities, described as “inherited,” strengthen the probability of that disease appearing, but it is meaningless to herald this as evidence of evolution.

Different human societies have lived in different places throughout history, and these societies have sometimes come together and interbred. The situation we see in Anatolia today or in the USA are stark examples of this: Asian, European and African people have intermarried and intermingled.

The point requiring attention here is that despite individual differences, these people are all “human.” The fact they possess different cultures or physical properties does not make them distinct life forms or mean that they have to be classified as “advanced” or “primitive.” Such thinking is erroneous and racist. However, some people trying to justify the colonialist policies of the 19thcentury in the legal sphere claimed that the “White European” race (Germanic and Anglo-Saxon) was the “most modern” and “most highly developed” of the current human races. The result was the idea that the indigenous populations of Africa and Australia were supposedly closer to animals, and led to the development of the unbelievable idea that their elimination would make a positive contribution to the development of mankind, according to the processes of evolution.

The Scourge of Racism That Began with Haeckel

Living things were first classified by the German biologist Ernst Haeckel, who placed white Europeans at the top of this classification of his own invention. This perverse and evolutionist view of Haeckel’s came to be accepted as “the role of the races in the progress of civilizations.”

The concept of race was first proposed by a German physician, Johann Friedrich Blumenbach (1752-1840). He classified mankind under five headings – Caucasian (the white race), Mongolian (the yellow race), Malayan (the brown race), Ethiopian (the black race) and American (the red race): Haeckel arranged this concept of race on a hierarchical basis, placing Europeans at the top, while placing the Vedda people indigenous to Sri Lanka, Aboriginal Australians and the natives of Rhodesia in present-day Zimbabwe at the bottom. These ideas were so influential that many racists foolishly described marrying such people and having children with them as “falling off the evolutionary ladder” and even suggested that this would be exceedingly damaging to mankind as a whole.

Similar to these preposterous ideas from the past, some supporters of evolution are currently seeking to portray the admixture with Neanderthals as something undesirable. This is of course a grave error, and the scientific evidence shows that Neanderthals were fully-fledged human beings.

At this point, it will be useful to remind people of some of the scientific evidence concerning the invalidity of the Darwinist mentality that seeks to portray Neanderthals as “primitive:”

The Neanderthals Had Superior Characteristics to Those of Present-Day Humans

Their large skull size refutes the Darwinist idea of the Neanderthals as “primitive man.” The volume of the Neanderthal skull was approximately 1700 cc, which is some 200 cc larger than that of a present-day man. This demolishes the evolutionist idea of classifying human beings as primitive or advanced based on skull volumes. According to the basic principles of evolutionist ideology, Neanderthals, with their larger brains, should be regarded as superior to present-day man, and that would represent an enormous contradiction for the theory of evolution.

In addition, archeological research has shown that the Neanderthal’s social lives were no different to those of present-day humans. The Neanderthals were a human race that has since become extinct. Erik Trinkaus, an expert on the Neanderthals, admits this as follows:

“… there is nothing in Neanderthal anatomy that conclusively indicates locomotor, manipulative, intellectual, or linguistic abilities inferior to those of modern humans. …” (Erik Trinkaus, “Hard Times Among the Neanderthals”, Natural History, Vol. 87, December 1978, p. 10.)

There is no doubt that because the Neanderthals were a human race, they possessed the same features as modern races. Neanderthal Man was a talented maker of tools and a skilled hunter. He even engaged in music and art. They had a cultural and social structure, just as societies do today, and had religious beliefs. (Nicholas Comninellis, Creative Defense, Evidence Against Evolution, Master Books, 2001, p. 194) The civilization established by the Neanderthals was therefore no fundamentally different to present-day civilizations.

What Does the Fact We Share the Same Genes as the Neanderthals Mean?

First and foremost, it is genetically impossible to describe Neanderthals as a separate species. The Neanderthal genome project has revealed that, like us, they had 23 pairs of chromosomes. What we see in evolutionist sources, however, is the bafflement on the part of Darwinists in the face of this finding that we share common genes; Darwinists have long described the Neanderthals as a separate species. The discovery that we shared the same disease genes of course means that we are disposed to the same diseases. To say that these genes have passed down to us from the Neanderthals is a natural hereditary outcome; these genes are not specific to the Neanderthals, but are quite widespread among all humans.

The Neanderthals Were Not a Primitive Species, But Human Beings Like Us

The social life of the Neanderthals was no different to that of human beings alive today. Archeological research has revealed that this human race used musical instruments, sewed clothes and engaged in artistic endeavors such as painting and sculpture. Indeed, in terms of physical features, the Neanderthals were superior to us; their bodies were larger and stronger, and, contrary to the claims of evolution, their brains were larger than ours.

People living in different parts of the world naturally look different to one another: In other words, they have different phenotypes; this is known as geographic isolation. Aborigines, Eskimos and Africans live in very different regions far from one another yet these races and the white European race all share common genes.

Europeans, who have enjoyed more advanced technology and material means throughout the course of history, have always described other races whom they do not like the look of as “backward,” and have always regarded themselves as “modern” and hence, superior to everyone else. In practical terms, this racist mindset that found an alleged justification in Darwinian ideology has represented the foundations for genocide, colonialism, systematic and ruthless exploitation and served as a rationalization for treating those who were different to themselves with the utmost contempt.

CONCLUSION: The Neanderthals Are an Ancient Human People

The way that evolutionists classify different human races as “advanced” or “primitive” is devoid of any genetic or biological foundation. Indeed, archeological findings have shown that Neanderthals possessed a highly social civilization. It is abundantly obvious that they were no different to present-day human races. The Neanderthals were human beings, just like us, who even suffered the same diseases, enjoyed civilized lives and in the passage of time, ultimately vanished from the face of the Earth.