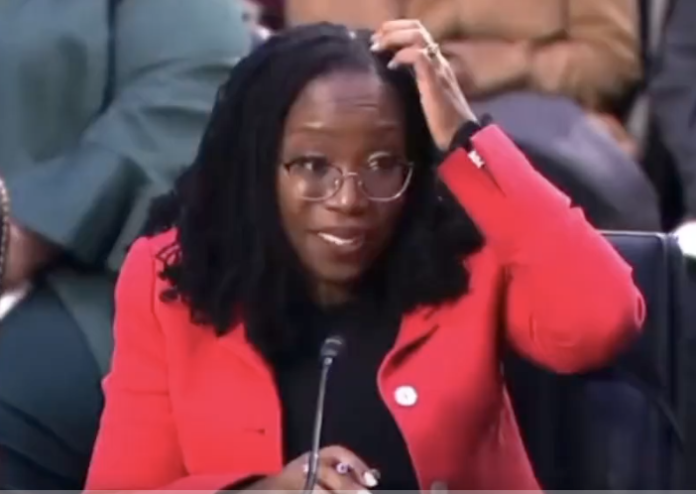 After Joe Biden’s nominee for the Supreme Court declared Tuesday that she couldn’t define what a woman is because she is not a biologist, Senator Ted Cruz attempted to drill down further, asking Judge Ketanji Brown Jackson if it would be legally sound in her opinion for him to suddenly decide he was a woman or even that he was Asian.

Senator Ted Cruz noted that Jackson appears to “be the only Supreme Court nominee in history that has been unable to answer the question ‘what is a woman?’

❌ Can’t define what a woman is.
❌ Doesn’t know when life begins.

Totally not a radical. This is fine 🔥 pic.twitter.com/4u3dqlirll

He then demanded to know “As a judge, how would you determine if a plaintiff had Article III standing to challenge a gender-based rule, regulation, policy without being able to determine what a woman was?”

Jackson responded stating that she does know that she is a woman and attempted to deflect by talking about how much she admires her mother, who is also a woman.

Cruz probed further, asking “Under the modern leftist sensibilities, if I decide right now that I’m a woman, then apparently, I’m a woman. Does that mean that I would have Article III standing to challenge a gender-based restriction?”

Jackson responded “those kinds of issues are working their way through the courts and I’m not able to comment on them.”

Cruz again drilled down, stating “Ok, if I can change my gender, if I can be a woman, and an hour later if I decide that I’m not a woman anymore, I guess I would lose Article III standing.”

Cruz continued the line of questioning, asking “Tell me, does that same principle apply to other protected characteristics? For example, I’m a Hispanic man. Could I decide I was an Asian man? Would I have the ability to be an Asian man and challenge Harvard’s discrimination because I made that decision?”

Jackson again didn’t answer the question, saying “Senator, I’m not able to answer your question. You’re asking me about hypotheticals.”

“I’m asking you how you would assess standing if I came in and said if I have decided I identify as an Asian man,” Cruz shot back.

Jackson responded that she would have to “make a determination” based on listening “to the arguments made by the parties.”

“If I decide right now that I’m a woman, then apparently, I’m a woman. Does that mean that I would have Article III standing to challenge a gender-based restriction?”

It is disturbing to watch someone who will likely preside on the highest court in the land unwaveringly speak like a brainwashed Party spokesperson from Orwell’s Nineteen Eighty Four, refusing to acknowledge basic known facts and spinning language into having a different meaning altogether.