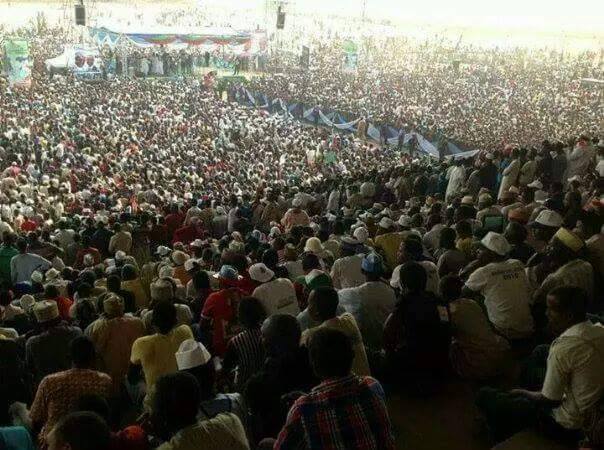 The immediate past First lady of Nigeria, Dame Patience Faka Jonathan, the one-time “Mama Peace”, has been in the eye of the storm since the $15 million allegedly found in her account was frozen by the anti-graft agency EFCC.

And just last week, a mouth piece of the former First lady, Udengs Eradiri, the president of the Ijaw Youth Congress (IYC), emerged from the blues in defense of a woman who had no history or a dint or hard work or industry outside political offices.

Eradiri, in his words, “Patience Jonathan got her wealth through gratification and thank you gifts from those who seek her help,” and urged EFCC to face the business of ensuring criminals are brought to book  instead of this current media trial against the former First lady. Not minding the overwhelming evidence of graft, including confessions from those who pleaded guilty of opening so many accounts with different names for the former First lady, the IYC president is yet to see anything wrong with her being in possession of such an amount, rather, is urging the EFCC to face the business of ensuring criminals are brought to book, but he failed to tell us who the criminals are. If being in possession of such an unexplainable amount of money (through proxies) does not qualify one as a criminal, who then is a criminal? His defense of the former First lady is part of the reason why our youths will continue to be relegated to the corridors of power and won’t be taken seriously by those who have refused to relinquish power to the younger generation. What exactly is wrong with Nigerian youths? It’s shameful, regrettable and lamentable that the president of such a highly placed association which represents the youths of Ijaw nation does not know it is an offense under the Corrupt Practices and Other Related Offenses Act 2000 to collect gift/gratification in any form or disguise. And he is asking where in the law that stated we should not collect gift or gratification? Mr. Eradiri should as well tell us where it is stated in the constitution that such an exalted Office of the First Lady should accept any gratification or thank you gift in whatever form. The defense of the IYC president of Patience Jonathan has also exposed the kind of leaders we have spearheading the ship at the youth level. Identifying and defending criminality by one who’s supposed to be the conscience of the youths of the Ijaw nation and Nigerian youths at large but has chosen the path of sycophancy in trying to create ethnic tension through his utterances in this season of recession where everyone is working so hard to ensure we cut our expenses to cushion the harshening economic meltdown facing us a nation.

Think of what $15 million would have done to the lives of people of Bayelsa State if such an amount of money was invested in the State. What every discerning Nigerian should be thinking at this stage is how such money would be recovered and where to channel or repatriate it to but my brother and his likes that had benefitted from the largesse of the former First Lady are seeing it as a witch hunt and are threatening thunder and brimstone if she ever gets prosecuted.

He has also passed the message across that as the IYC president, his duty is to collect gift/gratification from every knaves, mediocre and burnt out politicians that identifies with the congress.

If Nigeria is a place where laws are sacrosanct, the former First lady would have been negotiating with her lawyers for plea bargain to avoid a long jail sentence. The recent impeachment of the former Brazilian President, Dilma Roussef who had been on suspension over lesser offense should be an eye opener for us instead of justifying and defending the indefensible just to make newspaper headlines.

Please, whoever knows Mr. Eradiri should tell him not to be a sycophant in the season of recession and allow EFCC and other anti-graft agencies do their job.