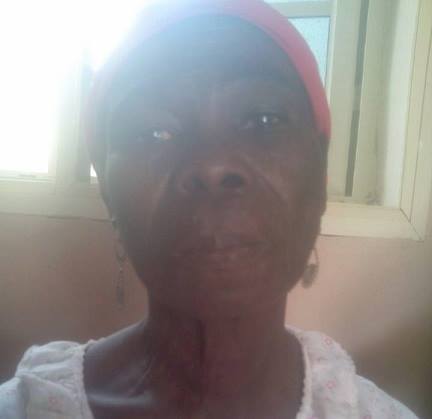 The story of how Mama Maryamu Bala of Madagali in Adamawa state is unlike the other people that were captured by insurgents. She had terrible experiences; ugly and undeserved treatments unleashed on them by Boko Haram from the north east Nigeria. Hers is a much fascinating and mind touching story.

Cover picture: A woman holds up her abducted daughter’s picture

HOW I WAS ABDUCTED

My Name is Maryamu Bala from Madagali, Marghi by tribe.  The past three months was a hell of experience on earth. Though I was not being subjected to any heinous work, what I saw and went through will convey my sympathetic story to you.

That fateful day, I and my granddaughter (Abigail) are working on my farm in the borders between Madagali and Gwoza when all of a sudden I heard my daughter shout “run grandma, they are coming on us, run they are here to kill us”. I told her “granddaughter run and leave me. What use will I be for them at this my age (67)? Even if they carry me to their camp I will only be a liability to them. I tell you that girl refused to go until when this people (Boko Haram) came and pounced on us. Out of shock I fainted for some hours. Before I realized it, I saw myself in a very big forest with different kinds of people both old and Young including women of different age groups having a sort of division of labour with instructors and armed men monitoring everything everyone is doing.

MY LIFE IN BOKO HARAM CAMP

My grown up daughter being a very agile and beautiful Girl they immediately seized her to a different unit of the camp. They converted the two of us to Islam when found out that that we are Christian from Madagali. They gave us Muslim veil and told us from today we are no longer Christians. They thought me to be meditating a portion of Koran on daily basis. My son you cannot believe me, it surprised me so much that their kind of Islam is different with the one I know many of my relations are practicing in Madagali. They thought us to be worshiping on difference timing from the time I use to see my people observing when they are to pray. Atimes east is not a compulsory focus area of worship, anywhere can serve the purpose. My first three weeks in that camp opened my eyes to discover that that place is meant to be training amateurs and foot soldiers. Sometimes you see Helicopters are dropping things in cartoons, heavy objects are always being uploaded using the people captured with very hash instructions. Failure to do that or any unnecessary delay you will just hear a gun shot on somebody’s head, if you are lucky it will be on your leg. They then drag your corpse to a nearby bush and burry.

In that camp I saw different people they called Ameer, who are mostly going round the camp making sure all people are always adhering to the teachings of Islam. There are other people who are always armed and combat ready that they do refer to as commandant. These ones are more dreadful than any one; they are the people commanding thousands of newly recruited members. On daily basis I am the one that normally ask to pray for them, asking Allah’s favor on their behalf as I happened to be the oldest woman, not doing any work at all.

I was later taken to a different camp close to Sambisa, the camp is between our lands in Michika and those areas of Cameroon, I know those areas very well because as a young woman we use to go there for farms, fire woods and trek through to other parts of Cameroon. That camp formation is more organized and structured than the former one. In this one I suspected it to be where Chibok Girls were kept.  Every morning a lanky shrink bearded man will come and address the whole congregation, giving orders of duties. I was treated by a professional Doctor. In that camp I also saw engineers, young girls who are nurses, drivers, carpenters, communication experts and many others that I cannot describe their careers. It was only in that camp that one of the commandants came to my sleeping room and asked me to be careful to follow all instructions or else he will drink my blood for lunch. I knew that day my life has come to an end and I concluded my granddaughter has gone to our ancestors as there was no trace of her since I left the former camp.

My son I saw devils; I saw cannibals and people who can do anything in the name of religion. My duty in that is to always observe the Abridged five normal prayers a day, to also sit down to be memorising Koran. After my stay in that camp for more than a month I noticed people on every day going into the other phase of the building amidst tied security, some of the people they resemble Arabs with long hair, while some are pure white coming around having some series of meetings. A girl who is one of the maids confided in me and said “Mama you see other side of the camp is where Abubakar Shekau and top commandant are living, there are many girls of our age there, even me they don’t allow to go there.”

When that young girl said that to me, I quickly remember the story of abducted Chibok School Girls, though I did not see them but my spirit told me they are in that camp.

Parents and relatives of the abducted Chibok Girls

HOW I WAS RELEASED

They still transfer me with many other people to a different camp much closer to Cameroon as I was told by our Ameer that we will be taken to Sudan for special training. It was there I started crying to that man, asking him what use I will be to them, begging him to help me go back to Madagali. The Man immediately shouted me down and threatened to kill me. Same day they brought other people from another camp. Miraculously I saw my granddaughter in a very bad condition. It dawned on me that they could have defiled her.

In the night, a man I never met walked up to where we were sleeping and said, “I saw you crying yesterday and it touched my heart, I was kidnaped just like you for more than four years, but don’t worry I will help you to escape you and your daughter this night.”

After some few hours he still came back to us and tapped my daughter. When she woke up, he asked her to wake me too. The man held my hand, commanded us not to say a word. My brother we trekked in the that evil forest until my strength failed me, when the man notice I no longer have strength, he backed me and we walked close to thirty kilometers and got to place well fenced. There he asked us to sit down and rest. We rested for about five minutes. He now told us to go and get bench, close by. It appears that place is use to be a deserted training camp of the Boko Haram.

They arranged the bench and chairs and he asked my girl to climb up to the other side. When my daughter successfully did that, this hefty man high held me up to my daughter’s end where she struggled to hold me down. Immediately he jumped up to our side, we walked outside that forest to a point we discovered a narrow path, it was there he said we should just keep on walking until the day will break and he bade us goodbye. It was from that place we trekked for five days to Yola, Adamawa state.