There are terms that need to be made clear and some issues need to be made open so that people can see what is not only outside but inside. I invite Friends for a short journey for Truth. Imam Ali (as) said:”When an issue confused you, study the root and you will know the effects.” I am a Muslim and it pained me so much when Islam is accused for the crimes of #AlQaeda,#ISIS, #BokoHaram etc. We will study the roots of these terror groups and make conclusions as to who is to be blame for their creations and the heinous crimes that they commit. Is Islam to be blame for all these atrocities or those that created/fund  them should be blamed.

This is the first terrorist group with Global dimension. It came into being after the now defunct Soviet invasion of Afghanistan when some groups emerged to oppose that invasion and they were called ‘Mujahideen’. They were armed by the #US via Pakistan while Saudi Arabia and other Arab regimes provided the funds. Then there were volunteer fighters who were mostly Arabs. The #CIA and Pakistani Intel trained them and Osama bn Laden was among them. They coordinated everything with their CIA handlers as the West and the Soviet block then were cold war enemies. Then somewhere along the line the CIA-trained thugs started thinking on their own, they rebelled against the CIA agenda and they were branded terrorist and condemned by the West. Then the Magic and the Magician became enemies and those thugs formed an organization they named ‘The Base’. That was how #AlQaeda was formed. 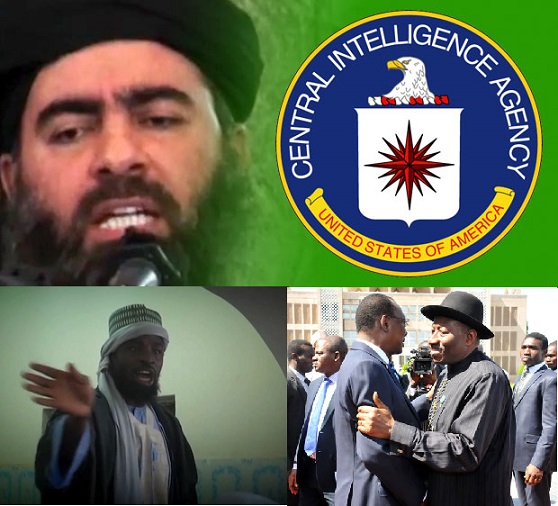 The CIA recruited, trained and armed these thugs to fight against the Soviets who were then the number one enemy of the West. The were tools of Western imperialism against the communist block. With the formation of that terror organization, Osama bn Laden gave a ‘Fatwa’ in 1998 that everything in the West is a legitimate target of attack including civilians since they pay taxes to their governments.

The next terror group to be examine in the Islamic State of Syria and Levant or “ISIL” for short. This is the most richest and fearsome terrorist group to have walk this earth.They are extremely brutal, efficient & effective all combined. Before the so-called Arab Spring, the Israeli prime minister Benjamin Netanyahu through the Americans sent a message to Syrian President Bashar al-Assad that if #Syria will recognize #Israel & agree to sign an Egyptian-type ‘peace’ Treaty with Israel then Israel will withdraw from the Golan Heights among other things. This agenda has the full backing of and American-led West. The purpose of this agenda was to secure the borders of the Israeli regime and secure its future. Occupied-Palestine (Israel) shared border with four Arab countries:Egypt, Jordan, Syria and Lebanon. The Zio-Western agenda is that if these four countries signed peace treaties with Israel then the borders of the Zionist entity is defined and the #Palestinian cause will be dealt a dead blow.

Egypt & Jordan has already signed this Western-sponsored ‘peace’ treaty with Israel. What remain are Syria and Lebanon to complete that agenda. The #Hezbollah factor in Lebanon stands against this agenda despite the fact that  the Lebanese government is headed by a pro-Saudi faction which a proxy of the West. Syrian President Assad rejected that Western and Israeli offer in 2011. Then after that the Arab spring came and this gave the West an opportunity to push for regime change in Syria to have a pro-West regime in Damascus to realize that agenda. True at the beginning of the Syrian protest in 2011 the Syrian people yearned for greater political freedom and democracy, and they truly deserve it but the West never wanted it to be a peaceful protest.

In 2011 the West did two things:they send armed men to infiltrate the protesters to shoot at police and they sent snipers to shoot at the protesters. The Syrian government accused the protesters of killing its police while the Opposition accused the Syrian government of killing peaceful protesters. The Zio-Western agenda in Syria was never about democracy, human-rights and freedom, it was only about regime change to have a pro-Western regime in Syria. This was the same False Flag Operation the West used in Ukraine to overthrow the Russian-backed government and replaced it with pro-Western one that triggered the Ukrainian civil war. The same pattern the West used in Iran in 2009 during the Greenee revolt after the second tern elections of former president Mahmoud Ahmadinejad.

Then back to the origin of #ISIS. The West using Turkey and its Arab puppets attracted fighters from all over the world to Syria for their agenda. To kill two birds with one stone, the evil and arrogant West introduced sectarianism using its Saudi proxy that ‘Shias are killing Sunnis in Syria’. This is despite the fact that majority of the Syrian Arab Army are Sunnis. Wahhabi clerics in Saudi and elsewhere issued Fatwas on Jihad in Syria. It is important to note that these#Wahhabi clerics have never issued Fatwa for Jihad against #Israel despite Israeli genocide and occupation of Palestine for more than 40 years. With all these the stage was set for bloodbath in #Syria. Thugs were recruited & trained in Turkey, Jordan and Saudi by the CIA and West Intelligence agencies. Then the Lebanese armed Resistance group, #Hezbollah,entered the war in 2012 to support the Syrian Government. This move became a major obstacle to the Zio-Western agenda of regime change in Syria. The West and Israel needed a vicious Force to ‘destroy’ or significantly weaken  #Hezbollah as the fighting ability of Hezbollah is legendary. The members of the group that latter became ISIS were carefully selected and trained in Jordan in 2012 by CIA and other Western intelligence agencies. After they were trained by the CIA and armed they were sent to Syria and positioned in areas where they can confront Hezbollah fighters. Because they were highly motivated and well funded they quickly gained ground by capturing territories and absorbed other groups that were already fighting in Syria.

When they arrived #Syria they had links with #AlQaeda. Latter they broke from AlQaeda for being ‘too soft’ then the thugs started thinking. The thugs set aside the CIA agenda &decided 2 establish a ‘caliphate’ on d areas they occupied& #ISIL was formed.This was their first problem with the West and their second problem with the West was that they invaded #Iraq and seized large areas of Northern Iraq. According to the terminology of His Eminence the Sectary-General of Hezbollah, Sayyed Hassan Nasrallah, the Magic and Magician became ‘enemies’. The major tools that help the growth of #ISIL are huge funds, ability to instill fear through release of brutal videos & suicide bombings.

#BokoHaram started in #Nigeria in 2008 when a deviant ‘cleric’ called Muhammad Yusuf who was preaching that modern education is a grave sin. The group raised up arms against the Nigerian Government and the Army was sent to subdue them. Their leader was captured alive and handed over to the Nigerian police. The corrupt #Nigerian police pumped 40+ bullets into the body of the #BokoHaram leader and claimed that he wanted to flee. This is the first blunder committed by the then Nigerian government. The second plunder was that all the #BokoHaramcaptives were extra-judicially killed. This is wickedness and inhuman that must be condemned. The Nigerian Government should have kept the #BokoHaram leader and the captives alive and tried them in a court of law as stated by the Nigerian constitution. They have not killed anybody then, why massacre & brutalize them in the most inhuman manner?

With this gross injustice by the Nigerian security agencies, jobless and gullible youths became attracted to #BokoHarm to avenge this injustice. Abubakar Shekau, the present leader of#BokoHaram was the deputy leader then. He was wounded but survived and with other survivors they went underground. The then President Yar’adua died and his Vice, Goodluck Jonathan, took-over. #BokoHaram then were just village bandits who attacked police post to get guns and bullets. President Jonathan who is a #Christian_Zionist on assuming power handed over the entire security of #Nigeria to the #Israeli regime in 2009. Under the watch of#Israel and its Mossad agents, #BokoHaram was hijacked to serve a foreign agenda. It grew to be a monster that threatened not only the Nigerian Nation but the entire West Africa.

The foreign agenda was the break-up of #Nigeria like what happened in Sudan but before that happens the Muslim-dominated North must be destroyed as much as possible. Between 2009-2014 $30+ billion was budgeted for security to fight against BokoHaran insurgency but the funds were stolen & the Nigerian military does not even have bullets to fight. But #BokoHarambecame increasingly better armed with sophisticated weapons killing innocent Nigerians and ravaging Northern towns and cities. #BokoHaram abducted thousands of girls  and women, gang-raped then and turned them to sex slaves. The then President virtually did nothing to save them. Then came the present President Muhammad Buhari. The #Israelis fled #Nigeria even before he took over. His government changed everything by destroying most of the terrorists camps, freed thousands of abducted girls, women and children and things are much better today. 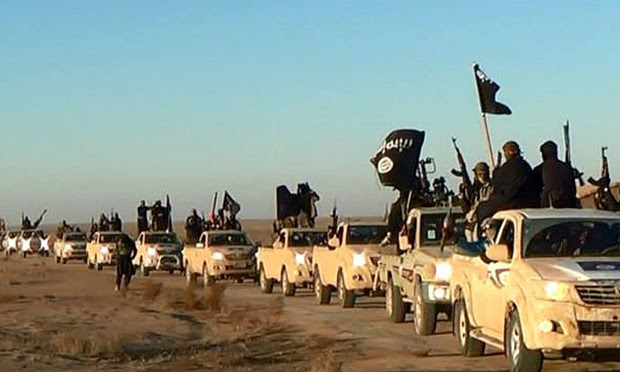 -Muslims are by far are the biggest victims of these murderous terror groups and all their actions are against the teachings and interests of Islam and Muslims.

-All the terror groups that are killing people in the name of Islam are inspired by Wahhabism. Saudi Arabia is the biggest promoter and it is a close ally of the West. The Saudi regime acts as an intermediary in recruiting the thugs for Western intelligence agencies.

-It is a fact that if the Saudi regime is overthrown, terror will be eliminated. The West will fight against that to the very end as it is its biggest tool of its imperialism in the Islamic world.

-Since Muslims do not whatsoever benefit from Takfiri terrorism, those that benefit from the murderous activities of these thugs are its sponsors. Ask your self who are the major beneficiaries of the death and destruction of these terrorists groups?

From this analysis we saw that Western intelligence agencies recruited and trained these thugs to serve their evil agenda in and Islamic world. To defeat this absolute evil ravaging Muslim countries, unity is important among Muslims and Sunni religious references must dissociate Sunni Islam from this murderous Takfiri terrorism.

Peace Be Upon Those Who Seek Guidance!