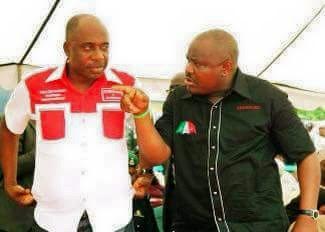 THE seeming vicious politics being unleashed on Rivers State, a troubled oil and gas state in Southern Nigeria, by two Ikwerre high ranking political actors, does not purport any good for the political sovereigns of the state, who are yearning for tangible dividends of democracy.

It is high time Transportation Minister, Chibuike Amaechi, and Governor Nyesom Wike, began to apply the brakes, and desist from destroying their political future. Arrogance and nasty egoic tendencies will not do any of them any good.

Before it becomes too late, its in Amaechi’s political interest to face the reality that he is no longer the electoral asset to the governing All Progressives Congress (APC) he thought he was. With all the show of federal might during the inconclusive re-run polls, he left the state severely bruised by his political adversary kinsman, Wike.

From his safe political haven in Abuja, he is again doing what he knows best to do. Heating up the polity. This time, he is assiduously pushing for a security profiling of Wike, the man who gave Amaechi, a second-term in office as governor, as a security risk to democracy.

The obviously angry State Chair of the Peoples Democratic Party (PDP), Felix Obuah says there is no truth in Amaechi tagging Wike, as a threat to democracy in the country. He notes that Ameachi is only struggling to divert attention from his alleged abominable atrocities, rebellious activities and breach of public peace and security in the state.

For the PDP top shot, it is the transportation minister who has become a threat to democracy and peace in the country. Speaking in Port Harcourt, the state capital, on Tuesday while expressing disappointment that rather than help President Muhammadu Buhari, to proffer solutions to the numerous problems on his hands, particularly the deteriorating economic situation and seeming lack of focus of the APC-led government, ”Amaechi is busy blackmailing a focused and development-sensitive Governor Wike, and causing trouble in Rivers State”.

Obuah emphasised that Amaechi’s claim was allegedly a cover- up, distraction and attempt to subvert the truth about who he is and what his activities in the state portend, and recalling how the minister flooded the state during the re-run elections with the armed security forces to rig the polls, kill innocent voters and intimidate citizens while exercising their franchise.

”Rather than admitting his failure as a governor for eight years and ill- preparedness for his new office as minister, Amaechi has resorted to pulling down the good foundation of the Wike administration, a mission and task he cannot accomplish”, PDP said.

While the APC is keeping a sealed lips on this seeming Ikwerre war of attrition, some concerned party leaders told our correspondents that they will not like to join issues with the duo. For them, the party should busy herself on how to checkmate the PDP in 2019, and not to rely on any might of sorts.

The counsel is coming from some worried APC chiefs as the PDP is calling on the former governor to settle down for business as a minister and allow the peace in Rivers. They are also reiterating their earlier appeal to President Buhari to call Amaechi to order, before he completely destroys the ”rough image” of his government.

With what is trying to play out in Rivers, soe of the political elite and power seekers are beginning to say in guarded whispers that nothing good and meaningful can come from Amaechi who allegedly failed as APC Leader in the state.