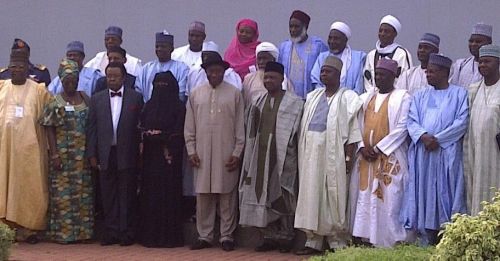 The Arewa Youth Forum (AYF) has called on the Federal Government to sack the Boko Haram Amnesty Committee set up by President Goodluck Jonathan without any further delay.

The Committee was set up to commence the process of granting amnesty to members of the Jama’atul Ahlus Sunnah Lidda’awati wal Jihad, popularly known as Boko Haram, and explore other options in addressing terrorism in the country. The Committee is also expected to act as a go-between between the group and the government.

The AYF said in a statement signed by its National President, Gambo Ibrahim Gunjugu, that the effort of the Committee has not yielded any positive result, but instead the spate of killings and destruction has been on the increase of late.

It lamented that the recent onslaught by insurgents in the North East has clearly shown that the security operatives deplored to the zone have failed in their assignment, saying present security chiefs in the country have shown that they have run out of new ideas to tackle the increasing wave of attack.

According to the statement, “We are asking the federal government to sack the Amnesty committee as all their work and the so called progress they have been talking about has not yield any positive and physical result for the people to see, instead the spate of killings and destruction has been on the increase of late.

“As the umbrella organization of all youths in the North, Arewa Youth Forum, (AYF) condemn the dastardly and barbaric act of killing of about 50 students of College of Agriculture, Gujba, Yobe State. We want to say that this recent onslaught by insurgents in the North East has clearly shown that the security operatives deplored to the zone has failed in their assignment.

“The present security chiefs in the country have shown that they have run out of any new idea to tackle the increasing wave of attack. It is time for them to go home and allow new ones with fresh ideas to tackle the current problem because they seem at a loss of what to do next in the face of brazen attack and brigandage by these nefarious elements.

“We are wondering if this situation continues unabated whether they would be any country for the upcoming youths of Nigeria to call their own. It is because of this that we are asking if the state of emergency is still in place in the North East, or if the federal government has lost the battle and the insurgents are now more powerful that the government of Nigeria. We are saying this because if the attackers can attack at will the way they are doing, then there is no hope.

“But the unfortunate thing is that instead of the Northern Governors in whose domain the fire is raging to concentrate their energy and resources  on tackling the menace towards bringing it to a an end, our so called leaders are busy fighting for the forth coming elections in 2015. They are busy discussing who will get the presidency or Vice president in 2015, when the North is on fire. We make bold to say that these present crop of leaders have failed the region.

“While we call on the Federal Government and the Northern States Governors Forum, to immediately close ranks and bring the violence in the region to an end, we also want to commiserate with the families of those that lost loved ones and pray that the Almighty Allah will give them to fortitude to bear the irreparable loss.”