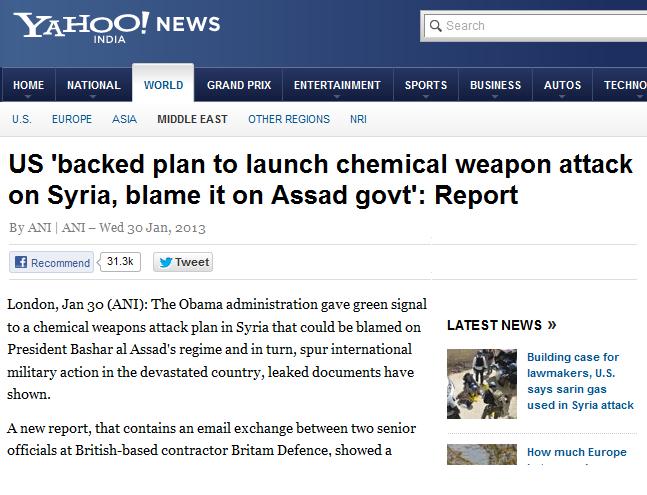 NewsRescue– In a difficult to believe alternate media news revelation, Yahoo news and other major news media outlets carried a report earlier this year, in January, that revealed that the US ‘backed plans to launch chemical weapon attack on Syria, blame it on Assad govt’.

Here is the link to the original story on Yahoo news : http://in.news.yahoo.com/us-backed-plan-launch-chemical-weapon-attack-syria-045648224.html

The original link still works, but for how long?
http://in.news.yahoo.com/us-backed-plan-launch-chemical-weap…

US ‘backed plan to launch chemical weapon attack on Syria, blame it on Assad govt’: Report

A new report, that contains an email exchange between two senior officials at British-based contractor Britam Defence, showed a scheme ‘approved by Washington’.

As per the scheme ‘Qatar would fund rebel forces in Syria to use chemical weapons,’ the Daily Mail reports.

Barack Obama made it clear to Syrian president Bashar al-Assad last month that the U.S. would not tolerate Syria using chemical weapons against its own people.

According to Infowars.com, the December 25 email was sent from Britam’s Business Development Director David Goulding to company founder Philip Doughty.

The emails were released by a Malaysian hacker who also obtained senior executives resumes and copies of passports via an unprotected company server, according to Cyber War News.

According to the paper, the U.S. State Department has declined to comment on the matter. (ANI)

Taken down from its original link, the story in Daily Mail can be seen on web archives: http://web.archive.org/web/20130129213824/http:/www.dailymail.co.uk/news/article-2270219/U-S-planned-launch-chemical-weapon-attack-Syria-blame-Assad.html

The US prepares to attack the Syrian people, and Obama and John Kerry are promoting agenda against the Syrian government. Inflating figures and arriving at conclusions on who used the gas, despite the lack of evidence.

Bringing this unbelievable, wicked ploy to reality, Dale Gavlak,  an AP, NPR and BBC reporter revealed this August 30th, that rebels confessed to him that they were responsible for the Syria chemical attack and over 300 deaths. They did so with chemical weapons they received from Bandar ‘Bush’ bin Sultan, the Saudi Intelligence director. See: NewsRescue–Syria Stunner: Rebels Admit They Mishandled Chemical WMD’s From Saudi Causing The Deaths