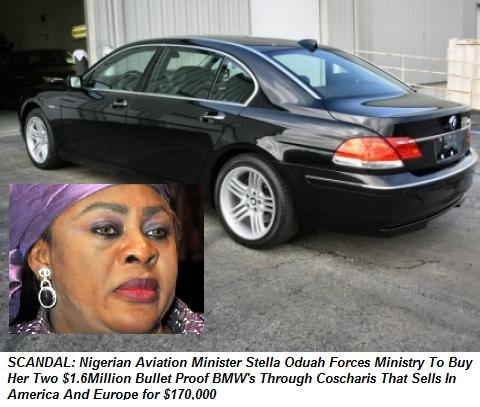 Following yesterday’s revelation by SaharaReporters that a cash-strapped agency of the Ministry of Aviation purchased two armored BMW 760 Li cars for the private use of Aviation Minister Stella Oduah, several automobile sales companies have indicated that the cars were massively overpriced.

Our report yesterday disclosed that the Nigerian Civil Aviation Authority (NCAA) paid approximately $1.6 million to buy the two cars from Coscharis Motors Limited in Lagos, meaning that each car cost close to $800,000. But our investigations with car sale companies revealed that the NCAA could have got eight, not two, BMW armored cars for their money.

According to Vista BMW in Coconut Creek in Florida, a fully armored BMW 760 Li car built to withstand AK 47-7.62×39 ammo and lower caliber weapons costs only $162, 195. Also, a quote provided by the armored car ballistic division of the International Armoring Corporation in Centerville, Utah revealed that each of the BMW cars could have been provided to the NCAA for $200,000 plus the cost of shipping to Nigeria.

SaharaReporters contacted other automobile sales companies in Europe who quoted even slightly lower prices for the model of the armored car purchased by the NCAA for Ms. Oduah’s personal use.

The two black BMW Li HSS vehicles had chases numbers WBAHP41050DW68032 and WBAHP41010DW68044 respectively were manufactured in Germany in 2008 according to investigations carried out about the models of the two cars by SaharaReporters.

Several officials of the Nigerian aviation authority told SaharaReporters that they were dismayed that the minister demanded that two expensive armored cars be purchased for her from the small and inadequate operating budget of the NCAA. As one of the officials stated, “We cannot even send our staff to critical training sessions, we cannot afford to update our equipment, and we need to employ more staff to ensure that every plane flying in Nigeria’s airspace is airworthy.”

Nigeria has been dogged by air crashes in the last few years, with more than 140 lives lost.

“If you consider all the priorities we have, but we don’t have the funds to meet, it is unfair that the Honorable Minister for Aviation, Mrs. Oduah, approved for us [the Nigerian Civil Aviation Authority] to purchase two BMW armored cars through Coscharis Motors Limited for almost $800,000 each,” said a senior officer at the agency.

Meanwhile, since our report came out yesterday, some officials in other agencies under the Ministry of Aviation have revealed to SaharaReporters that the minister is pressuring them to make available the N150 million each to “settle” lawmakers at the National Assembly who are have scheduled a probe of the ministry on their return from the Sallah break.

One of the sources told our correspondent that Ms. Oduah had already received N300 million from two of the agencies and may have funneled the bribe funds to lawmakers who have summoned her to appear before them following the recent crash of an Associated Airline flight. The flight, which was conveying the remains of former Governor Olusegun Agagu of Ondo State, crashed on October 3, 2013 near the Murtala Muhammed International Airport. Fifteen people died in the crash, with several, including Mr. Agagu’s son, wounded.