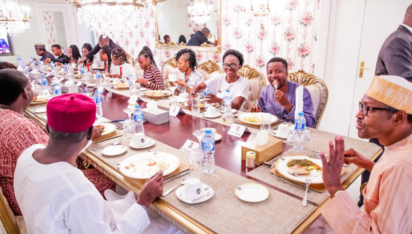 …as more people live below N684 per day

This was made known by the Country Director, OXFAM, Nigeria, Constant Tchono, at the Oxfam  October 2019 Program Quality Review and Planning Workshop held in Abuja.

According to Tchono Nigeria’s population would be the world’s third-largest by 2050, therefore all hands should be on deck to see how poverty would be tackled before then.

Review our partnership effectiveness using the Management and Outcome Matrix framework; Define the programmatic priorities for the Country Operational Plan 2020/2021; Reflect on the road ahead is becoming an influencing hub by a) discussing how to improve public accountability and citizen’s engagement through OGP processes and b) brainstorming on the New Organisational Model (NORM); Explore how to strengthen business support to power up our execution capacity while ensuring operational excellence.

“On April 8, 2019, when we met here for the last Program Quality Review workshop, I quoted some numbers from the World Poverty Clock. This was how many people in Nigeria live in extreme poverty, below the benchmark of $1.90 a day, or NGN684 a day.

“Not sure who remembers the number I quoted. It was actually 91,501, 377 people making Nigeria the World Capital of Poverty. As if that was not bad enough, today October 7, that is 6 months later, the number has jumped up to 94,470,535 people.

What this means is that we have added 2,969,158 people more into extreme poverty.

By comparison, this number is more than the population of Gambia and Cape Verde combined. SFH to distribute 3.5m mosquito nets in Niger “At the current rate, Nigeria is not only off-track to meet the SDGs but many now believe that up to 25 per cent of the world’s extreme poor will live in Nigeria by 2030. Nigeria’s total population is 200,963,599 people according to the word meter and is to become the world’s third-largest country by 2050.”

He also urged the Buhari-led government to make it a reality to lift out 100 million Nigerians in 10 years with a strong political will that will shock the world.

“Government is aware of this and President Buhari stated he intends to “lift 100 million Nigerians out of poverty over the next 10 years and set them on the path to prosperity” to “fundamentally shift Nigeria’s trajectory and place [it] among the World’s Great Nations.”

If this is achieved, Nigeria will shock the world to achieve the SDGs. “Now the question is what is the role of the citizens and how that role will be played in supporting both elected and appointed officials in achieving this lofty goal?

“What could be the role of International NGOs like Oxfam on that journey? We are here in this Program Quality Review and Planning meeting, these three days, to reflect on what that role in support of Government and citizens could look like under the theme “On the  Road To Becoming an Influencing Hub.”

He also added that it is imperative for organisations like his to key into the government’s vision and dream to actualize this lofty goal to tackle poverty.

“To do this effectively, we have to look back to our current programs and check them against the Oxfam well-established quality standards. Then we have to project ourselves into the future in support of the new imperative. We have to go faster. There is no time to waste as more people are getting into extreme poverty as we speak”, he added.