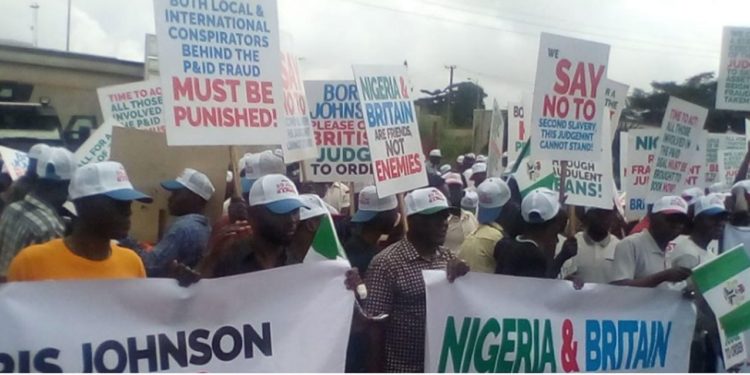 Obviously sponsored pro-Buhari and Attorney Abubakar Malami for-rent protesters have begun constituting a nuiscance at the British and Irish embassies.

The protesters have claimed they are “paid” to be there for a whole week. While freedom protests are banned in Nigeria with the police and army never allowing them, these protesters were immediately equipped and allowed to constitute a nuiscance thus proving they are government supported and sponsored.

Related: NewsRescue–Buhari’s Incredible Loss of Nigeria’s $9bn: A Coup Would Have Happened By Now If It Were Military Era

P&ID an Irish company debunked AGF Malami’s claims of not being responsible for Nigeria’s woes, categorically breaking down the processes that led to the current $9.6 billion debt which they explained was only $850 million when Buhari took over.

The firm described Malami as “incompetent” and laid out how he was absent at court proceedings and when present made hopeless tenders.