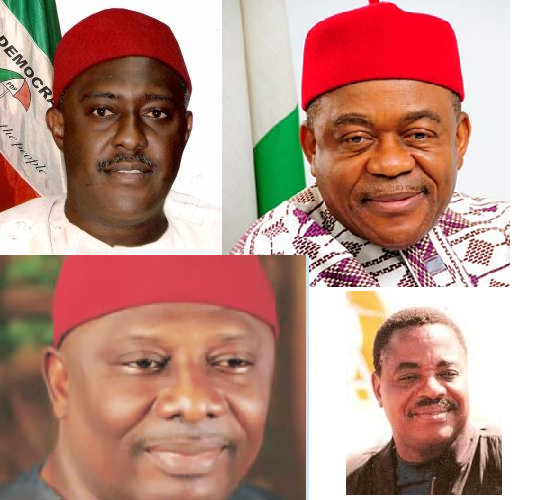 The declaration of results of Saturday’s governorship election in Abia stalemated midway Sunday following the reversal of the cancellation of three local governments results by the Returning Officer, Prof. Benjamin Ozumba.

Mr. Ozumba had announced the cancellation of results from Osisioma, Obingwa and Isialangwa North Local Government Areas on the grounds of “incontrovertible evidence of violence’’ and reports from international observers.

Mr. Ozumba said the cancellation was reversed due to fresh information concerning the conduct of the election in the three council areas.

He said polling centres with issues would be isolated and decisions taken on them later.

The polling agent of the All Progressives Grand Alliance (APGA), Ahamdi Nweke, had questioned the rationale behind the decision by the returning officer to reverse his earlier pronouncement.

Mr. Nweke insisted that elections did not take place in Osisioma, adding that the party would not accept any result from the area.

He tendered a hand-written note reportedly signed by the Commissioner of Police, Habila Joshak, indicating that electoral materials recovered from the bush in Osisioma were in police custody.

Mr. Joshak, who was present at the centre, did not controvert Mr. Nweke’s assertion.

Proceedings were later disrupted after an international observer, Ms Shirle Wilson, from Noble Leadership Initiative, United Kingdom, testified at the centre that “election did not take place in Osisioma’’.

Mr. Wilson said election in the area was marred by violence and snatching of ballot boxes and other electoral materials by hoodlums.

The pronouncement heightened tension at the centre, leading to the adjournment of further announcement of results.

The controversial result from Osisioma, which had earlier been announced, showed that PDP scored 42,442, while APGA polled 1017.

Meanwhile, results from 10 local government areas have so far been announced.

In his reaction, APGA governorship candidate, Alex Otti described the governor’s appearance at the collation centre as “an abuse of power, designed to intimidate and exert undue influence on the electoral officials’’.

The governor was accompanied by the Minister of State for Defence, Rtd. Col. Austin Akobundu, PDP’s National Publicity Secretary, Olisa Metuh, and Onyema Ugochukwu, among others.